Spawning and fry production of Carps

Among the important carp species used in aquaculture, it is only the common carp that spawns naturally in ordinary fish ponds.

Among the important carp species used in aquaculture, it is only the common carp that spawns naturally in ordinary fish ponds. Until about two decades ago, the culture of Chinese carps and most Indian major carps was dependent on eggs, larvae or fry collected from riverine spawning areas. With the widespread practice of induced breeding, the use of wild seed has completely disappeared in China. In India and Bangladesh, some of the seed required are still collected from the wild, with different types of collecting nets. A very common spawn-collection tool consists of a funnel-shaped, close-meshed net with a cloth receptacle attached at the codend to hold the catches (fig. 16.15). The net is set in the shallow margins of flooded rivers with the mouth of the net facing the current. Fertilized eggs and larvae brought in with the current collect in the cod-end receptacle, from where they are periodically scooped out. 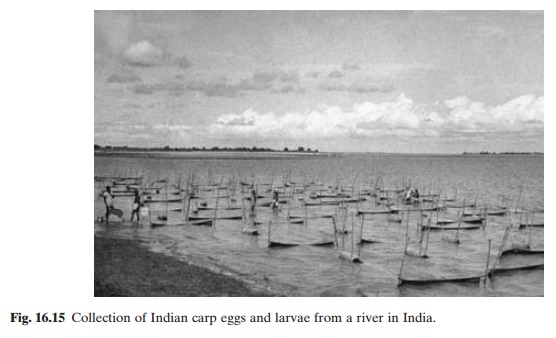 Some of the seed used for culture in India are produced by breeding the major carps in special types of ponds known as ‘bundhs’.These are seasonal or perennial ponds or impoundments, where riverine conditions are simulated during the monsoon season. Large quantities of rainwater from the catchment area flow into the bundh after a heavy shower and create extensive shallow areas along the margin which serve as suitable spawning grounds for the carp. The perennial type of bundh is used as a brood pond and will therefore already have a stock of breeders when the marginal areas are inun-dated by rainwater and conditions become suitable for spawning. In the seasonal bundhs, a selected number of brood fish in the ratio of two or three males to a female is introduced. The mature fish move to the shallow areas near the margin and adjoining areas, and spawn after a short period of courting. The fertilized eggs settle on the shallow areas and can easily be collected with small pieces of close-meshed netting for incubation and hatching in improvized hatching pits, double-walled hatching hapas or cement cisterns. There is, as yet, no consensus of opinion regarding the factors which prevent these carps from spawning in ordinary ponds or the exact conditions which facilitate spawning in bundhs. It is believed that the cumulative effect of the conditions created by heavy rains and flooding of shallow areas induces gonadal hydration, contributing to final maturation and spawning. It would appear that the change of environmental conditions caused by heavy dilution with fresh rainwater triggers spawning.

Some of the recent developments in the use of bundhs for carp breeding are aimed at increasing the percentage of successful spawning. By storing rainwater in a reservoir located at a higher elevation, the bundhs below can be filled whenever needed, making it possible to conduct breeding operations without having to wait for a satisfactory rainfall. Injection of about 10–20 per cent of the brood stock with pituitary hormones is reported to have the effect of complete spawning of the entire brood stock. Sinha et al. (1979) were able to obtain the spontaneous spawning of silver and grass carps in bundhs, without having to resort to stripping.