A third group of carps is the Indian carps: catla (Catla catla) (fig. 16.10), rohu (Labeo rohita) (fig. 16.11), mrigal (Cirrhina mrigala) (fig. 16.12) and calbasu (Labeo calbasu). In India these species are referred to as the major carps, to distinguish them from a number of other cyprinids that grow only to smaller sizes, known as minor carps. For more or less the same reasons as the Chinese carps, these species have also been cultured together in traditional pond culture. Even though the farmers were able to spawn them in special ‘bundh’ types of ponds, most of the larvae and fry required for culture had to be collected from their natural spawning grounds in the rivers. It was extremely difficult to sort out the species at the early stages, and was easier to rear them together rather than separately. Addition of Chinese carps, such as grass carp, silver carp and common carp, to this combination resulted in higher yields than from polyculture of Indian carps only. This combination of Indian and Chinese carps is referred to as composite carp culture in India. 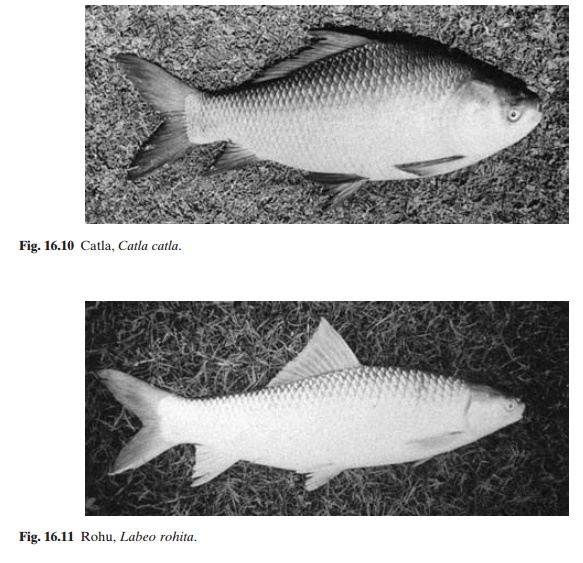 Adults feed on various types of vegetable matter including decaying aquatic plants, algae, etc. The adult mrigal is a bottom feeder. Larvae and fry have about the same feeding habits as the other Indian carps, but the adult fish feed on algae, diatoms, higher plants and detritus.

Calbasu is also a bottom feeder, feeding on benthic and epiphytic organisms and organic debris from the pond bottom. Larvae and fry feed on unicellular algae until they reach about 2cm, after which they prefer phyto- and zooplankton. The combination of surface, column and bottom feeding fish has been the basis of Indian carp culture. As indicated earlier, the Chinese silver carp and grass carp and the common carp have been included to improve production. Several ratios of these species have been tried in experimental stations, and it was reported that a combination of grass carp, catla, rohu and common carp gave the best results.