As indicated earlier, a considerable proportion of the fry and fingerlings of Indian carps used in India is raised from eggs and larvae collected from natural spawning grounds in rivers.

As indicated earlier, a considerable proportion of the fry and fingerlings of Indian carps used in India is raised from eggs and larvae collected from natural spawning grounds in rivers. Some are also bred in special ‘bundh’ type ponds as described previously. Induced breeding of Indian carps by hypophysation is now increasingly used in India, as well as in other Asian countries.

For successful hypophysation, an adequate stock of selected brood fish is reared with special care for a period of four to five months before spawning. The brood stock ponds are generally 0.2–0.5ha in area, with a minimum depth of water of about 1.5m. The selected brood fish are generally two to three years old and 2–4kg in weight. They are stocked at the rate of 1000–2000kg/ha. The ponds are periodically fertilized to produce enough planktonic organisms, taking care not to produce any algal blooms. Supplementary feed of groundnut oil cake and rice bran in equal quantities may be given at the rate of 1–3 per cent of body weight of the brood stock. It is advisable to change the water or add fresh water to hasten the maturation of brood fish. Generally, all the major carp species are kept together, but when enough ponds are available the species and sexes may be segregated. The males can be distinguished by the roughness of the pectoral fin, whereas the pectoral fins of the females are smooth.

Induced breeding is normally carried out at the onset of the monsoons, when there is an accumulation of rainwater in the ponds and the water temperature has somewhat decreased.

The mature female has a bulging abdomen and swollen reddish vent. The extent of maturation can be determined by examining cathetered eggs from a female. Mature males eject milt when the belly is gently pressed near the vent.

Pituitaries of the common carp are considered the best for induced breeding of Indian carps, but in most cases the glands from the same species are used, largely because of easy availability. Pituitaries of many other species and HCG have been used for induced breeding, but there is as yet no consensus of opinion about the effectiveness of many of them. Pituitaries of several species of catfish and other species from fresh- and brackish-water sources and partially purified salmon pituitary gonadotrophins have been tried, and asummary of the results are given by Jhingran (1982).

The dosage of pituitary gland extract to be administered depends on the stage of maturity of the fish and environmental conditions such as rain and water temperature. A priming dose of 1–2mgperkg brood fish, followed by a resolving dose of 6–8mgperkg six hours later, is suggested for rohu, catla and mrigal. Natural spawning in hapas or other containers can be expected four to six hours after the second injection, in all three species. The optimum temperature for spawning for all the species appears to be around 27°C, though they will spawn in a temperature range of 24–31°C, except catla, which prefers cooler water.

After the first injection, the brood fish are released in breeding hapas in the proportion of one male to two females. Breeding normally takes place within three to six hours after the second and final injection. Stripping is not required as the treated fish spawn and fertilize the eggs naturally. Though Indian major carps spawn only once in a year in their riverine habitats, during the monsoon, it has been possible to spawn rohu and mrigal twice during a season at intervals of 30–60 days. 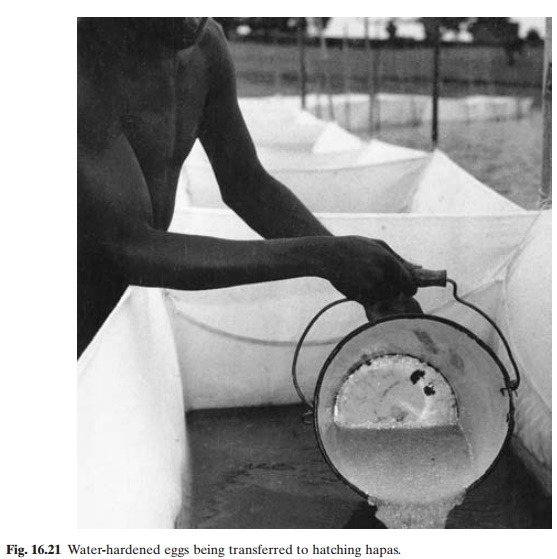 16–18 hours and the hatchlings fall into the outer hapa. When hatching occurs in hatchery jars, 50000 eggs are kept in each jar of about 6.35l capacity, with a water flow of 600–800 l/min. The hatching time in the jars is about two to three hours less than in hapas. Though the Indian major carps spawn in a wide range of water temperatures under hypophysation, percentages of fertilization and hatching rate are better when the temperature is about 30°C. After all the eggs hatch out, the inner hapa with the egg shells and debris can be removed. The larvae can be reared in the outer hapa for two to three days, after which they should be removed to nursery ponds for further rearing.