Of all the species of finfish or shellfish used for aquaculture, carps undoubtedly have the oldest history. The common carp (Cyprinus carpio) is probably one of the few aquaculture species that can be considered to have been domesticated.

Of all the species of finfish or shellfish used for aquaculture, carps undoubtedly have the oldest history. The common carp (Cyprinus carpio) is probably one of the few aquaculture species that can be considered to have been domesticated.

The common carp is presently cultured all over Asia, in most parts of Europe including the former USSR, and on a small scale in some countries of Africa and Latin America (particularly Brazil). It has also been introduced in North America and Australia. Though considered to be a sport fish as well, its main importance is as a food fish. In fact the prejudice towards common carp in some countries has been created by anglers who consider it a pest in sport waters, because it muddies the water when routing around for food on the margins and the bottom of water bodies.

There are three recognized varieties of common carp: the orange-coloured scale carp (C. carpio var. flavipinnis), the partially-scaled mirror carp (C. carpio var. specularis) and the virtually scaleless leather carp (C. carpio var. nudus). There is also a variety with only onerow of big scales on the lateral sides. The normally coloured or orange-coloured scale carp and the mirror carp are the varieties preferred for culture, mainly because of their faster growth rates (figs 16.1 and 16.2). Several races and strains of common carp have evolved or have been created through breeding programmes. A well-known race is the ‘big-belly’carp of China, which is a hardy fish that starts breeding at the early age of about six monthsand has relatively large gonads, which accounts for its name ‘big-belly’. The Japanese Yamato carp appears to be related to the Chinese big-belly. The Punten carp of Indonesia is a quick-growing race. 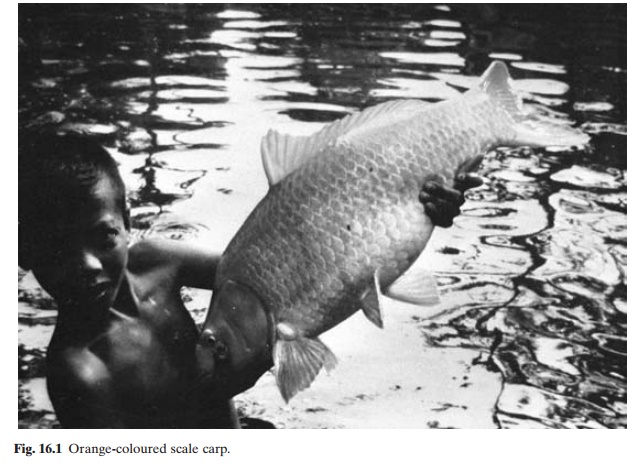 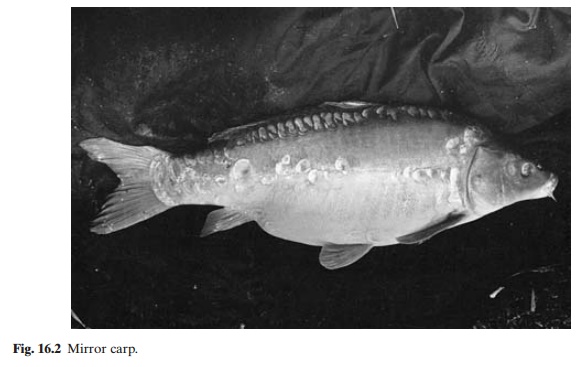 There are a number of other geographical races such as the Galician and Franconian races of the mirror carp and the Aischgrund carp of Germany and Royale of France. They are distinguished by their body form, particularly by the length/height ratio and body thickness. The main varieties cultured in the former USSR are the scale carp, the mirror carp (with scales scattered all over the body) and the Ukrainian frame carp (with scales framing the sides of the body). A number of breeds or strains of the common carp have been developed by genetic breeding in East European countries, especially in the former USSR, Hungary and in Israel.

Kirpichnikov et al. (1979) referred to local strains of the Ropsha scaly carp based on selection of hybrids between the Amur wild carp and Galician cultured carp and also the Ukrainian-Ropsha hybrid scaly carp, obtained through crossing the Ropsha carp with the Ukrainian ‘frame-scaly’ carp (fig. 16.3). Most of these strains have been developed for the purpose of improving the growth rate, suitability for the climatic conditions, time of maturation and spawning. Hungarian races of common carp have been crossbred to produce hybrids with improved egg fertility and increased growth with lower feed consumption (Bakos, 1979) (figs 16.4 and 16.5). Recently, a strain of common carp known as the Heyuan carp has been developed in China by crossing the female 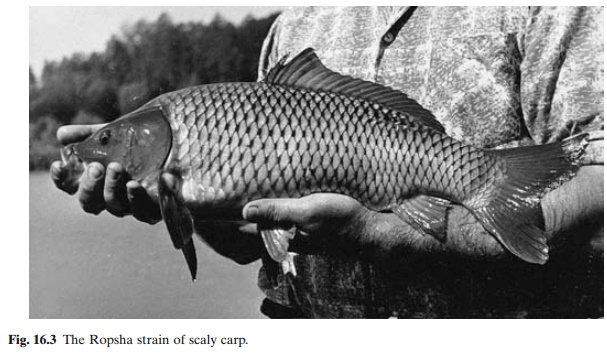 ‘purse carp’ with the male ‘yuanjiang carp’. This hybrid strain is reported to grow faster (by over 30 per cent) than wild carp, is easy to catch, has a larger body weight and apparently greater disease resistance. 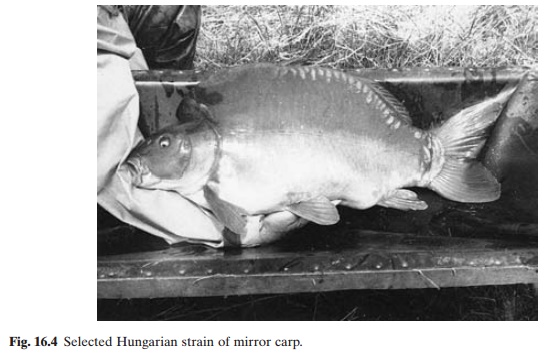 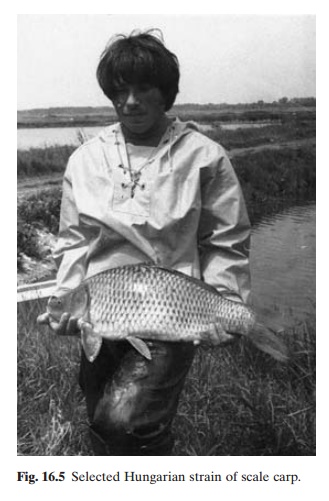 The common carp is an omnivore and in nature and in culture ponds it feeds on a wide variety of plant and animal matter. The young carp, up to a length of about 10cm, feed on protozoa and zooplanktonic organisms such as copepods and cladocerans. Above that size, they start feeding on benthic organisms, such as insect larvae (especially chironomid larvae), worms and molluscs, together with large quantities of vegetable matter and epiphytic organisms. The carp’s habit of sucking food organisms in the mud on the pond bottom and margins makes the water muddy and weakens the base of pond dikes. However, when fed on artificial feedstuffs or processed feeds, this habit is greatly curtailed.