Diseases and mortality of Carps

A number of diseases that affect carps have been described and consideration was given to the role of the environment in the prevalence of diseases and mortality of stocks.

A number of diseases that affect carps have been described and consideration was given to the role of the environment in the prevalence of diseases and mortality of stocks. The culture system and culture technologies also play an important role in the occurrence of diseases. Diseases are generally less rampant in extensive types of carp culture in comparison to intensive systems like cage rearing. Intensively stocked polyculture carp ponds in China are heavily loaded with organic manure and bacterial, fungal and viral diseases are comparatively common in these. Haemorrhagic septi-caemia, gill-rot, enteritis, Myxosporidiasis, Ichthyophthiriasis, Dactylogyrosis, Trichodinia-sis, Saprolegniasis, Synergasilosis and Lernaeo-sis are common in the carp ponds.

Enteritis in Chinese carp ponds is caused by Aeromonas punctata and can be recognized byerythema on the abdomen, decayed fin rays and swollen and reddish anal openings. The intestine becomes purplish in colour and the blood capillaries are inflamed. The intestine is filled with pus-like slime and ulcerated mucus membrane. Grass carp is the main species affected and mortalities of up to 70–90 per cent can occur, particularly during the period May/June. Poor feeds are believed to be responsible for weakening resistance to the pathogen. Disinfection with bleaching powder and provision of better feeds and feeding methods are rec-ommended as preventive measures. As a cure, treatment with medicated feeds containing sulphaguanidine, at a dose of 10g per 100kg body weight of fish on the first day, and half that from the second to the sixth day, is reported to be effective.

Myxobolusis is one of the common Myx-osporidian diseases of grass carp, particularly dangerous to fry when the ponds are heavily stocked and food availability is low. The spore of the parasite attaches to the intestine of the fish. The plasmodium that emerges from the spore sucks nutrition from the host and develops into spores on the intestinal wall. As a result, heavy mortality of fry can occur. The control measure is thinning the stock to enable better growth and resistance to infection.

Infestation by the tape worm Bothriocephalus gowkongensis is also reported to occurin young grass carp below 10cm in length, but not in the adult. The diseased fry is milk-white in colour, thin and feeble, and suffers from per-nicious anaemia. The intermediate host is a cyclops, in which the coracidium of the worm undergoes its development into procercoid. When the grass carp fry eats the infected cyclops, the procercoid develops into plerocercoid and adult stages. Mortality caused by the infection can be as high as 90 per cent during winter seasons. The only means of eradicating the parasite is by disinfecting the pond with quicklime at a concentration of 0.5ppt.

In polyculture ponds in India, Ichthyoph-thiriasis, fin and tail rot, Saprolegniasis and infestation by Argulus, Lernaea and Ergasilus are common. The major diseases in carp ponds in Israel are also similar. Carp ponds in Eastern and Western Europe appear to be more prone to disease problems. It is believed that this is related to the greater stress that the fish are exposed to during severe winters. The problem of infectious dropsy of carp has already been discussed. Gill-rot or branchiomy-cosis, costiasis, icthyophthiriasis and dactylogy-rosis are the other more common diseases affecting carp in Europe.

One of the major causes of large-scale mortality in carp ponds, particularly in tropical and sub-tropical regions, is oxygen deficiency and resultant anoxia of fish. As carp culture is mainly done in highly manured ponds with dense stocking of fish, there is a greater chance of oxygen deficiency occurring. The rate of oxygen production through photosynthesis is very high during day time in highly fertilized ponds with a rich growth of phytoplankton. During the night, photosynthesis and oxygen production cease and the only source of dissolved oxygen is the atmospheric oxygen dissolved in the water due to wind and water movements. The consumption of oxygen by the organisms in the pond continues throughout day and night and in highly productive fish ponds the balance may be greatly affected. Oxygen deficiency and anoxia can occur if the conditions are not properly monitored and the necessary action taken to rectify it. Though dense growths of algae produce oxygen, they also reduce light penetration in ponds and reduce oxygen production through photosyn-thesis in the lower layers. Intensive manuring, which increases the organic loading of pond waters, results in high rates of production of bacteria, protozoa, zooplankton, etc., thus adding to oxygen expenditure. High temperatures lead to a lower dissolved oxygen concentration in water and stimulate higher consumption of oxygen through increased respiration. Under cloudy atmospheric conditions, photosynthesis and dissolved oxygen production are reduced as a result of lower light irradiation and this often causes large-scale mortality due to anoxia under monsoon weather conditions in Asian countries.

like the bighead, can help in controlling the occurrence of anoxia. The presence of detritus-feeding fish helps to reduce the accumulation of organic matter. Even when special care is taken to stock ponds with proper ratios of these species, unfavourable conditions can arise. In such circumstances, the two most common measures adopted are addition or exchange of water and aeration. The addition of fresh water, if possible by cascading or spraying, increases the dissolved oxygen content of the ponds. Where possible, it is better to drain some of the pond water and replace it with fresh, well-oxygenated water from an outside source, or even pump back the same water in a spray so as to increase the dissolved oxygen content to about 3ml/l. Aeration is a more efficient means of controlling the depletion of oxygen.

types: hydraulic and air diffusion. A water pump is the basic device for hydraulic aeration, whereby the energy content of the water is increased. The air intake device can be a cascade, a sprinkler, an ejector or an air-intake head. Surface aeration can be provided by a simple open impeller or a centrifugal pump. The basic unit of an air diffusion aeration device is the air compressor, which can be a root-type blower, a ventilator, a compressor or a membrane pump. The air penetrates the water through a porous material or perforated tubes installed in the pond. When the air is diffused through a perforated pipe, large bubble of up to 10mm in diameter are formed. If the diffusor is a porous material, fine bubbles of 2– 5mm diameter can be produced. The smaller the bubbles, the larger is the total surface for a given volume of air and the lower their buoy-ancy, which improves oxygen transfer. As the bubbles pass through water, part of their oxygen content is dissolved in the water. An upward water movement also results, which creates a mixing effect. 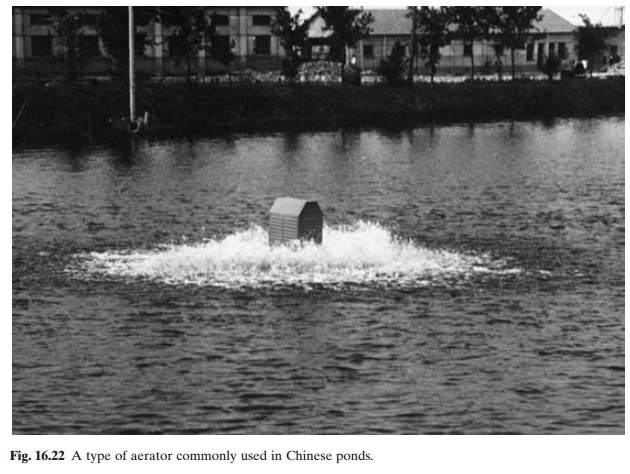 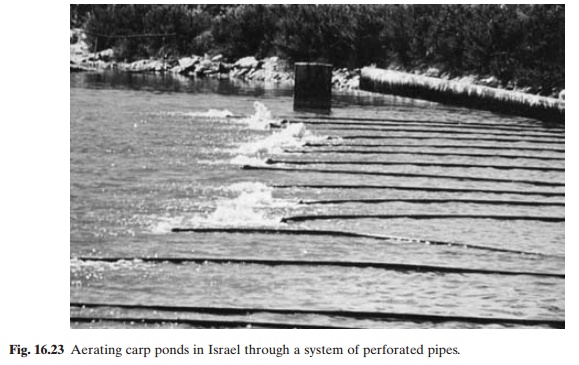 In carp ponds in China, aerators have become standard equipment. Frequent operation, often once a day for an hour or two, has been found to increase yields by as much as 14–28 per cent, as a result of better circulation of nutrients and consequent plankton growth. At times of oxygen deficiency, aerators are operated for two or three hours in the morning or around noon, particularly on overcast days.