Although there are records of Chinese carps breeding in rivers in Japan and, as mentionedearlier, Indian carps have been bred in special bundh-type ponds in India, the main means of propagation of these species is through hypophysation.

Although there are records of Chinese carps breeding in rivers in Japan and, as mentionedearlier, Indian carps have been bred in special bundh-type ponds in India, the main means of propagation of these species is through hypophysation. Though some interspecific hybridization of Chinese carps has been done, there do not appear to be any races or hybrid stains with well-defined cultural characteristics that a farmer can use for propagation. Chinese farmers get their brood fish from fish farms, rivers, reservoirs or lakes. Females of silver carp over three years, bighead four years, grass carp five years and mud carp three years are selected for propagation. As the males mature earlier, one year younger males of all these species can be used. Larger individuals are usually pre-ferred, because of the larger quantity of eggs and milt that they have.

Although many farmers keep all the species together in the same brood ponds, it is preferable to maintain them separately as there are some differences in the requirements of each species. Grass carp prefer clean water and so there should be a regular renewal of water. They are fed on cut grass, sprouted grains, rice bran, corn meal and oil cakes. The feeding rate for grass is about 15–20 per cent of the body weight and for other foodstuffs 2–2.5 per cent of the body weight. About 20–30 brood fish can be kept in a 1000m2 brood stock pond. Silver carp brood fish prefer small fertilized ponds with a good growth of phytoplankton. The fish are fed with soybean flour or rice bran. In a 1000m2 pond about 30–50 brood silver carp can be kept. The bighead needs water with a rich growth of zooplankton, which can be produced through regular manuring. The stocking rate in a 1000m2 pond is about 20–25 fish. The mud carp and black carp can be stocked at higher rates, even up to 100–150 in a pond of this size.

The brood stock for spawning are selected largely on the basis of their size and the extent of maturation. Sometimes a sample of eggs is removed and examined to determine the stage of maturity. The maturity of the males is easily determined. If the milt oozes out on gentle pressing of the abdomen towards the genital pore, they are ready for spawning.

Actual propagation techniques differ very considerably between countries. Inducedbreeding by hormone injections is the most common technique, except for the bundh breeding practised on a limited scale in India. Countries outside China, including East European countries and Israel, use indoor hatcheries, with stripping, fertilization and hatching, on lines very similar to those described above for common carp. In China itself, most farms now use special spawning ponds for spawning and hatching of eggs, as these are considered to be more efficient and cost-effective.

The inducing agents presently used are pituitary extracts of the common carp, silver carp or bighead, and human chorionic gonadotrophin (HCG), as well as luteinizing release hormone (LRH) or luteinizing release hormone-analogue (LRH-A).There is no species-specificity in the response to pituitary extract, but the common carp pituitary continues to be a widely used agent. Chinese fish culturists report that the hypophyses of silver carp and bighead are fatal to grass carp due to heterotypic protein. HCG is more effective on silver carp and bighead and its effect on grass carp and mud carp is rather weak. The grass carp, bighead and black carp respond well to LRH-A, but the silver carp appears to be less responsive to it.

In East European countries, pituitary extracts are generally administered in two doses. The first preparatory dose is about one-tenth of the total dose, i.e. about one dry gland (3–3.5mg) for each female at the beginning of the spawning season. If, however, the water temperature is about 22–28°C, which is the optimum for maturation, half that dose will be enough as a preparatory dose, except in the case of the bighead, which needs one whole gland at any time during the propagation season. The most common practice in Israel is an initial injection of 0.2 pituitary per kg body weight, followed by a second injection of 0.5 pituitary per kg, 24 hours after the first. Eight hours later a third injection of 0.7 pituitary is given. When only two injections are given, 0.3 pituitary is administered first followed 24 hours later by 1 pituitary per kg female body weight.

The interval between the preparatory injections varies according to the temperature conditions, and consequently the rate of maturity. During the beginning of the propagation season it may vary between 6 and 24 hours, but less later. In the case of mud carp, an interval of only three to five hours will be needed. However, the common dose is one gland or 3–3.5mg pituitary in a 0.65 per cent salt solution per kg body weight of medium and small females. The males need only one injection of 0.6 pituitary. The injection is given, taking the necessary precautions and care as described for the common carp. It is usually given in the dorsal part of the body. In China, both intra-muscular and coelomic injections are practised and both are considered to be equally effective. In India, the females are normally given two intramuscular injections of gland extracts at the rate of 10–14mgperkg body weight, the first one being 3–4mgperkg body weight. The second injection is given after a 6-hour interval. Males are given only one injection.

At temperatures between 20 and 22°C, the brood fish become ripe for stripping in 12–10 hours and at temperatures between 26 and 28°C, in nine to seven hours. Stripped eggs should be fertilized immediately with adequate quantities of milt, as in the case of common carp. For one litre of eggs, about 10ml milt will be required. After mixing the eggs and milt for a minute or two, clean water is poured over the mixture, at the rate of about 100ml water for one litre eggs. Stirring of the eggs is continued for two or three minutes. The eggs begin to swell on contact with water. More water is then added so that 3–5cm of water is maintained above the eggs. About 30 minutes after fertilization, the eggs should be washed with water three or four times and then they are ready for incubation.

Any of the types of incubators used for common carp can be used for Chinese carp as well. Plastic funnel or sieve-cloth funnel incubators are more commonly used (see figs 6.43 and 6.44). Because fertilized Chinese carp eggs swell to 50–60 times their original volume, fewer eggs can be incubated in a funnel in comparison to common carp. In a funnel of 8–10l capacity, about 2–3l eggs can be incubated. Since the eggs are more fragile and the egg shells much thinner, they are handled more carefully and the water circulation in the incubator is slower. In hatcheries in Eastern Europe, formaldehyde is added at the rate of 1 part in 20000–30000 parts hatchery water, to prevent bacterial and fungal infections. Woy-narovich (1975) has devised a simpler and less risky method of treating developing fertilized eggs, with a solution of 5–10g tannin in 10l clean water, two or three times. The first treatment is about six to seven hours after fertilization and the last six to eight hours before expected hatching. At temperatures of 26– 28°C, hatching is completed in 24–28 hours, but if the temperature is lower (about 22–25°C) it will take 32–35 hours. The hatchlings swim upwards and eventually out of the jars or funnels into suitable tanks for further rearing.

The hatchlings can be reared indoors in larval tanks for about 10–11 days and then transferred to nursery ponds. If necessary facilities are not available for indoor rearing, the hatchlings can be reared in sieve-cloth tanks or hapas outdoors (fig. 15.18).After the yolk sac is absorbed, they must be fed with planktonic organisms like rotifers, ciliates, etc. Israeli farmers feed the larvae with trout starter feeds or soybean meal.

Specially designed spawning and hatching pools are now in common use for fry production of Chinese carps in China (see fig. 6.37). This has the advantage that large numbers of brood fish can be spawned, with minimum handling. Spawning, incubation and hatching can be carried out in separate pools or in interconnected pools without the need for transferring eggs. The operation of these facilities requires minimum skill on the part of the workers. Generally, better hatching rates are obtained by this method, although visual monitoring of the state of fertilization and development of eggs is more difficult. 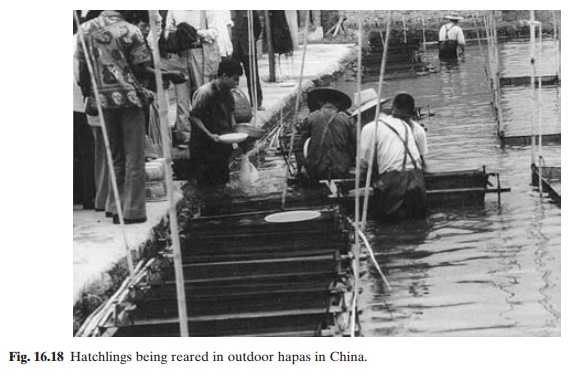 The spawning pools are generally located near the brood stock ponds and are usually circular cement tanks, (see fig. 6.37) 8–9m in diameter and 1.2–1.5m deep, with a capacity of 50–60m3. The bottom of the pool slopes towards the centre, where there is an outlet tube leading to the egg collection chamber (fig. 16.19). Sometimes the pools are elliptical in shape, with a maximum width of 5m and a length of 15–18m.Two inlets, one at the broader end and the other at the narrow end, are connected to the egg collecting chamber. The water inlets are placed on the walls of the tank in a tangential position so that the incoming water will create a circular flow. A flow of clean fresh water is maintained in the pool at a rate of about 200–400l/s. There is an egg collection chamber for each pool to facilitate collection of eggs, estimation of quantity and transfer to the 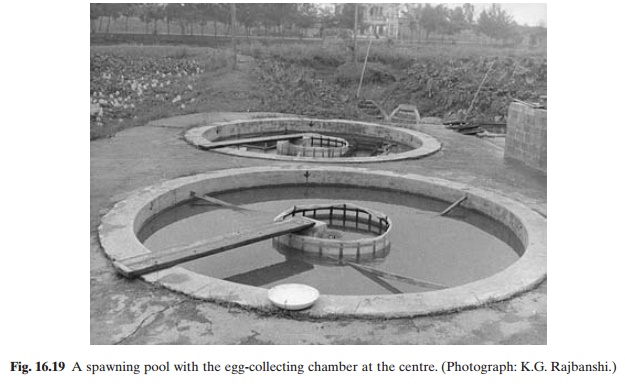 incubation pools. The outlet pipe of the spawning pool is fitted with a net to collect the eggs. The collection net made of bolting silk is long (260cm) and conical with a diameter of 45cm at the rim and a collecting box (60 x 40 x 30cm) at the cod-end. The floating eggs are carried by the water flowing from the spawning pool into the collecting box, from where they can be removed at regular intervals.

The incubation and hatching pools are also circular in shape, 3.5–4.0m in diameter and 1m deep, and have one or more incubation chambers (fig. 16.20). When there are a number of incubation chambers they are built concentrically, with cement walls separating them. It is important to maintain proper water circulation, for which several faucets are installed tangentially at the bottom of the pond. If the water flow is not adequate to create the velocity of 0.2–0.3m/s, paddle wheels may be used to increase the circulation. 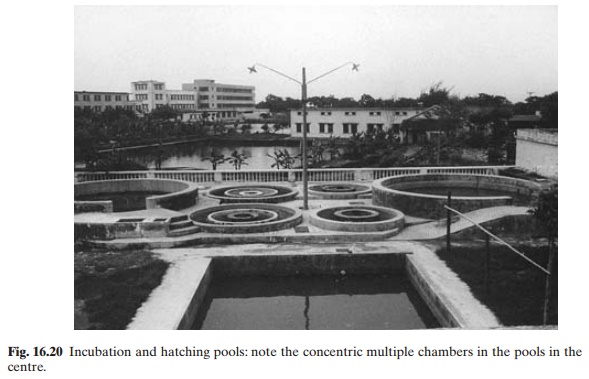 The brood fish are introduced in the spawning pond after hormonal treatment, in the proportion of three males to two females. They spawn after the second injection of HCG or pituitary extract, generally at dawn. The effective dose of HCG is about 1100IU/kg, but it is less effective in grass and mud carp. The optimum dose of LRH-A is 10–13mg/kg for females and half of that for males. For silver and bighead carp the dose is 200IU HCG/kg. After spawning, the brood fish are removed to the brood stock ponds. The floating eggs can either be collected and removed to a hatching pool or the spawning ponds can be connected to a hatching pool, to which the fertilized eggs will be carried with the water flow. The size of the incubation and hatching pools varies, but many of them have a diameter of about 2.9m, depth of about 0.8m and capacity of 4.6m3. Such pools can incubate about 700000–800000 eggs per m3, with an average hatching rate of 80 per cent. In some small farms in China, incubation is done in large clay jars (150l capacity, containing 150000–200000 eggs) with a vertical flow of water. Larger farms use a battery of jars, producing as many as 8 million larvae per year. Some farms use portable, funnel-type incubators. The larvae are removed to nursery ponds after the absorption of the yolk sac, which may take four to five days, depending on the temperature.