The historical reason for the origin of their culture  in  China  has  been  mentioned.

It would appear that the very popular poly- culture system originated with the culture of these species. Since they do not spawn naturally in ponds, larvae and fry had to be collected from  the  natural  spawning  grounds  in  the rivers. It was not easy to sort young larvae com pletely, and so all the species had to be cultured together. Experience showed the compatibility of the species in ponds and the higher produc tion that the farmers could obtain by combined culture. 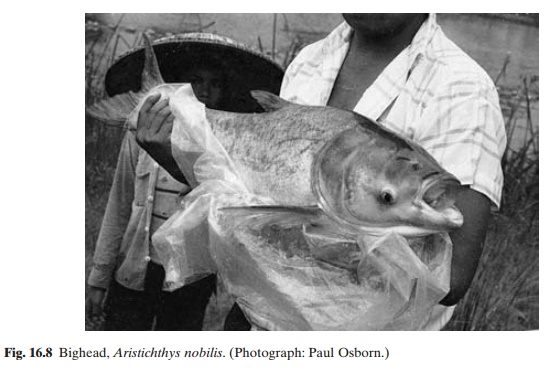 The grass carp is herbivorous and feeds on macrovegetation, including grass and aquatic plants; the silver carp feeds on plankton, mainly phytoplankton; the bighead consumes the macroplankton; and the black carp feeds on snails and other molluscs at the bottom. The mud carp feeds primarily on detritus. To this combination is added the omnivorous common carp, which the farmers consider a scavenger in the pond. The grass carp starts feeding on macrovegetation when about 2.5–3cm in length, and is reported to ingest up to 50 per cent of its weight in the form of land plants (Martyshev, 1983). It stops feeding at a temperature of 10–12°C; at temperatures above 20°C, it eats large amounts of grass. The silver carp starts feeding on algae at a length of about 1.5cm. It can feed on microscopic phytoplankton, as small as 30–40 mm, by filtering it through its very efficient gill rakers. The larvae of bighead feed on unicellular planktonic organisms.The fry and adults feed on both phyto- and zooplankton and thus compete to some extent with silver and common carps; however, the bighead generally prefers larger organisms. The

adult black carp feeds on benthic animals, but shows a special preference for molluscs.Though it is not considered a high-value fish outside China, it serves a specific role in controlling the growth of molluscs in polyculture ponds. Mud carp does not grow to a large size and is essentially a subtropical species, and so its use in polyculture is somewhat restricted, even though it is greatly esteemed by consumers.

Despite considerable interest in Chinese carps, their culture was restricted initially to only a few neighbouring countries with large Chinese populations, until methods of induced breeding were developed in China, the former USSR and India during the period 1960–62. Starting with the former USSR, most of the East European countries have made progress in the culture of these carps, known there as phytophagous or herbivorous carps. The more popular species have been the grass carp, because of its ability to control macrovegetation, and the silver carp, as it can utilize the dense blooms of phytoplankton. But the consumer preference continues to be for the common carp and countries like Hungary have depended on export markets in the Middle East for their production of silver carp. Many countries in Asia, some in the Middle East (particularly Israel and Egypt) and some countries in South and Central America (especially Mexico) have introduced Chinese carps for pond culture. The main interest in Western Europe and the USA has been in using the grass carp as a biological weed-control agent,

and the species has been introduced for this purpose. To prevent breeding of the species in weed-infested water bodies, efforts have been made to produce all-male grass carp by administration of methyltestosterone, with limited success (Stanley and Thomas, 1978).