As a group, carp appear to be especially suited for pond culture, although other systems of culture, in cages and rice fields and stocking in open waters, are carried out experimentally or commercially on a small scale.

As a group, carp appear to be especially suited for pond culture, although other systems of culture, in cages and rice fields and stocking in open waters, are carried out experimentally or commercially on a small scale. Small ponds or pools with running water have been used in countries like Japan and Indonesia, for intensive culture of common carp, but most of present-day aquaculture is carried out in stagnant or semi-stagnant ponds. As carps feed on low trophic levels, it is possible to produce most of the food needed through fertilizing ponds and this greatly reduces feed costs. Further, different types of organic manures and farm wastes can be used as fertilizers, and this contributes to the farm economy. Species like the grass carp that feeds on macrovegetation can be fed at little cost with land grass and most types of aquatic vegetation, in a fresh or decayed state. Because of these advantages and the comparative ease with which they can be reared in small and large farms, including village ponds, carps are generally perceived as low-valued fish, suited for large-scale production to feed poor communities in rural areas. This is not the case in all areas. In countries or regions where there is a distinct consumer preference for carps, some of the species sell at comparatively high prices – for example the grass carp in China, rohu in Eastern India and the common carp in Israel, Eastern Europe and some West European countries.

Though all the carps used in aquaculture are fresh-water species, they can tolerate salinities up to 10–11ppt, and sometimes even grow better at salinities of about 5ppt.

As will be discussed the carps, particularly the Chinese and Indian carps and common carp, have been widely used in their native countries for open-water stocking. Some of the other Asian countries have also transplanted them in open waters. Common carp has been the main species for ricefield fish culture, but other species like tilapia have replaced them in recent years as the major species in some countries.

Most of the recorded cases of cage culture of carps are experimental in nature, but there is a common traditional practice of growing them in bamboo cages in Indonesia and small-scale cage farming is practised in Chinese lakes. In Indonesia, cages are installed on the bottom of canals conveying large amounts of domestic wastes (fig. 16.13). The fish obtain their food mainly from the bottom of the canals, where chironomid larvae and other benthic organisms abound. The farmer may introduce limited quantities of supplemental feeds. Obviously this type of culture differs very considerably from the present-day culture of fish in floating cages, based mainly on artificial feeding. Such practice appears to be adopted only in Japan for growing carp in lakes, reservoirs and large irrigation or farm ponds. 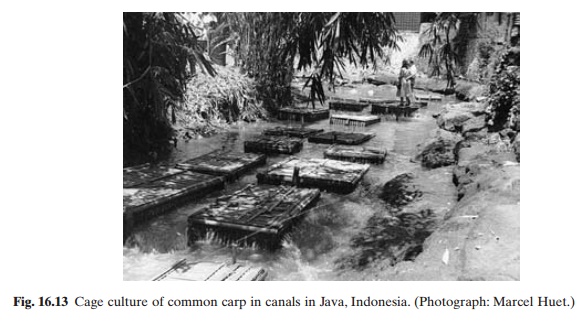 Carps are grown in a wide range of pond facilities, ranging from small undrained village ponds to large, well-laid-out pond farms several hectares in area. Most such farms have a series

of nursery and rearing ponds of different sizes. Rearing ponds are comparatively much larger in Eastern Europe than in Asia. If breeding is done on the farm, brood ponds (and, in the case of common carp, spawning ponds) may be included in the farm layout. Many farmers purchase their fry from commercial fry producers and so require only nursery ponds in their farms (fig. 16.14). 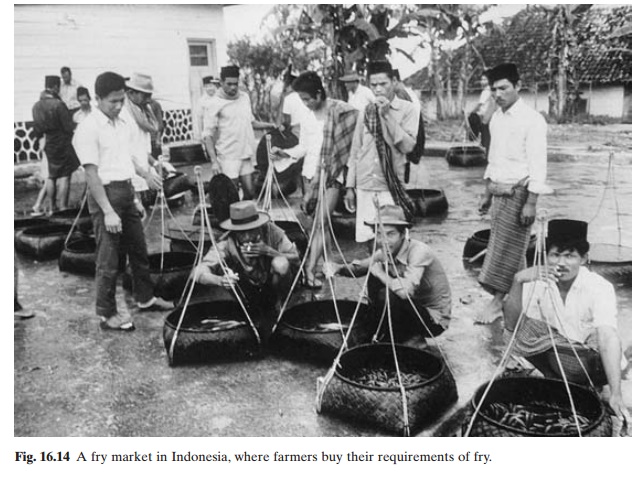 Although monoculture of the common carp is practised by many farmers, the Chinese and Indian major carps are almost always grown in polyculture systems. As mentioned earlier, several combinations of Chinese and/or Indian carps and the common carp are used very widely. The crucian carp (Carassius auratus) and the wuchang fish (Megalobrama ambly-cephala) are often added to this combination inChina. However, each combination is based on one or two species (grass, black or silver carp) as the major elements and the others are only complements to the major species. Polyculture of common carp, silver carp, tilapia and the grey mullet (Mugil cephalus) in fresh-water ponds has become a common practice in Israel. This combination is valuable because of the control of filamentous algae by the common carps, the consumption of planktonic algal blooms by the silver carp and consequent improvement of oxygen regime, and the feeding on the organic ooze at the pond bottom by the tilapia. More importantly, such polyculture has helped considerably to overcome problems created by limits on carp production and to diversify and increase overall pond fish production.