Let us discuss about Sovereignty

Sovereignty, the term has been derived from the Latin word ‘superanus’ which means supreme or paramount. Roman jurist and the civilians during the middle ages employed the term ‘summa’ potestas and ‘Plenitude potestas’ to designate the supreme power of the state. In political science the use of the term ‘sovereignty’ dates back to the publication of Bodin’s ‘The Republic’ in 1576. 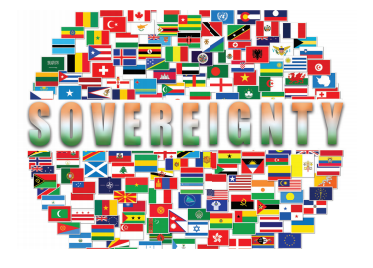 “Sovereignty is the absolute and perpetual power of the state. that is, the greatest power to command.”- Jean Bodin

We shall now study the characteristics of Sovereignty. What are they?

The chief characteristic of sovereignty is permanence. Sovereignty lasts as long as the state lasts. The death of the king or the overthrow of the government does not affect sovereignty. Hence, the people of England say ‘King is dead, Long live the king’.

Exclusiveness here implies that there cannot be two sovereign in one independent state and if it exists the unity of the state will be destroyed.

Sovereignty is the life and soul of the state and it cannot be alienated without destroying the state itself.

The spirit of sovereignty lies in its unity. Sovereignty is not bound by time and lasts until the state lasts.

Indivisibility is the life line of sovereignty.

Sovereignty wields power by virtue of its own right and not by anybody’s mercy.

What are the two aspects of Sovereignty?

Internal sovereignty: An assembly of people in every independent state has the final legal authority to command and enforce obedience. This sovereignty exercises its absolute authority over all individuals or associations of the individuals in the state. 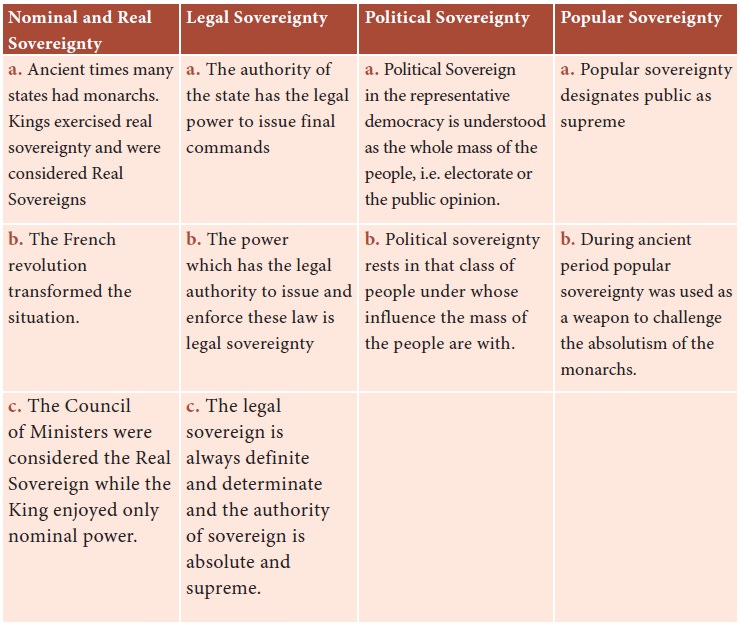 De-facto sovereign is one who has no legal claim to sovereignty but possesses it in fact and exercises necessary force to make and enfore its laws.

De-jure sovereign is one who has a legal claim to sovereignty but does not possess it in fact.

Here is an interesting piece of information!

Pluralism is a powerful protest against the monistic theory of sovereignty, which endows the state with supreme and unlimited power. The pluralistic theory originated in the writings of Otto V. Gierke. The pluralist challenges the claims of the state to supremacy on the ground that the society consists of many associations and the state is one among them. Hence, the state cannot be endowed with sovereign power of the community. There exists many social, political, cultural and economic institutions in society and many of these institutions are prior to the state. For example, Family and church are prior to the state.

The dawn of pluralist theory

v  Pluralism upholds the importance of associations and claim more autonomy for it.

v  For democracy to flourish the sovereign state must not be subject to any legal authority.

What are the criticisms for Pluralism?

v  Itis the Sovereign state that brings about unity and regulates all the associations existing in society.

v  Laws are framed by the state unlike the belief of pluralist.

v  State is needed for protecting people from the excess of associations. 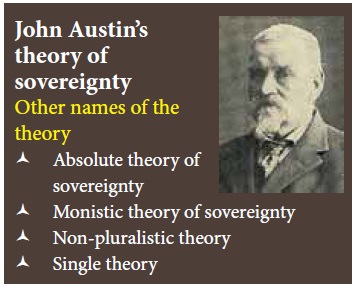