A family of proteins, which by binding of GTP or GDP can alternate between two conformational states, is widely distributed in the animal and plant kingdoms.

A family of proteins, which by binding of GTP or GDP can alternate between two conformational states, is widely distributed in the animal and plant kingdoms. These proteins are GTP-binding proteins, or simply G-proteins. The heterotrimeric G-proteins, discussed in the following, are bound at the inner side of the plasma membrane interacting with inte-gral membrane receptor proteins consisting of seven transmembrane helices (Fig. 19.1). The receptors have a binding site for the signal molecule at the outside and a binding site for G-proteins at the cytoplasmic site of the plasma membrane, and are therefore well suited to pass external signals into the cell. Heterotrimeric-G-proteins are composed of three different sub-units: Gα (molecular mass 45–55 kDa), Gβ (molecular mass 35 kDa), and Gγ (molecular mass 8 kDa). In Arabidopsis thaliana the α- and β-subunits are each encoded by one gene, whereas the γ-subunit is encoded by two genes. Subunit G has a binding site that can be occupied by either GDP or GTP. In animals, binding of the heterotrimer to a receptor (e.g., an adrena-line receptor occupied by adrenaline) enables the exchange of the GDP for GTP at the Gαsubunit.

The binding of GTP results in a conformational change of the Gα subunit, which subsequently dissociates from the trimer. The liberated Gα -GTP unit functions as an activator of various enzymes that synthesize components of the signal transduction chain. For instance, Gα -GTP stimulates a GMP-cyclase that forms the signal compound guanosine-3’ -5’ -monophosphate (cGMP) from GTP (Fig. 19.2), as has been found in plants and animals. Gα -GTP also stimulates phospholipase C (see Fig. 19.4). The function of this reaction in the liberation of Ca2++ as a signal component will be dis-cussed in the following section. In fungi and animals, Gα -GTP also stimu-lates the synthesis of the signal compound adenosine-3’ -5’ -monophosphate (cAMP) from ATP via an activation of AMP-cyclase. It has so far not been definitely proved whether cAMP plays a role also in plant metabolism. 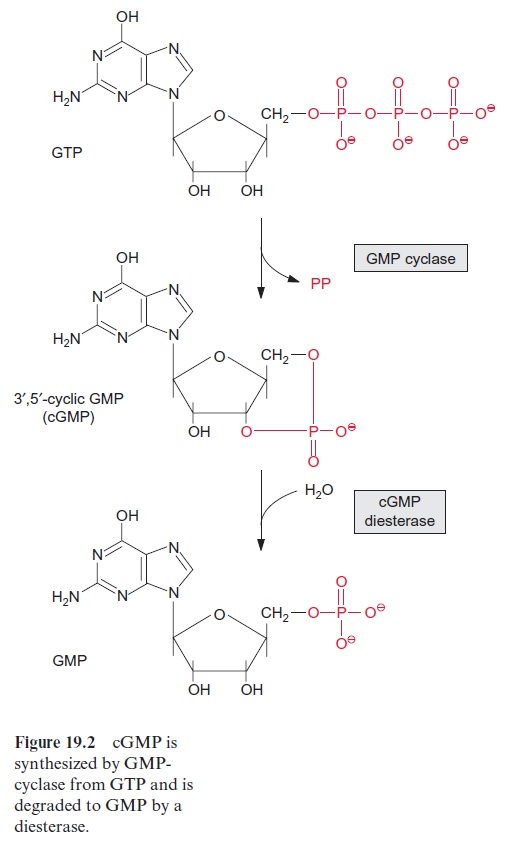 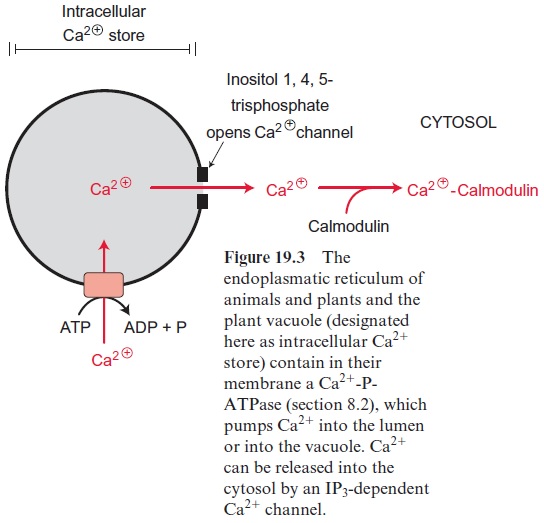 Gα -GTP has a half-life of only a few minutes. Bound GTP is hydrolyzed to GDP by an intrinsic GTPase activity, and the resulting conformational change causes the Gα subunit to lose its activator function. It binds again to the dimer to form a trimer and a new cycle can begin. The short life of Gα -GTP makes the signal transduction very efficient.

All eukaryotes also contain small G-proteins, which have only one subunit and are related to the α-subunit of heterotrimeric G-proteins discussed in the preceding. All small G-proteins belong to a superfamily termed the Ras superfamily. These small G-proteins, located in the cytosol, have binding domains for GDP/GTP and an effector domain. Binding of a GDP renders the protein inactive and that of GTP active. When stimulated by a signal, the small G-protein interacts with an exchange factor, which converts the GDP-bound inactive protein to a GTP-active conformation by GTP/GDP replacement. Through its effector domain the active GTP-conformation interacts with other proteins in analogy to the Gα -GTP of the heterotrimeric G-protein. It has been predicted from genomic analyses that the Arabidopsis genome encodes more than 90 small G-proteins. Small G-proteins have various regulatory functions, such as the regulation of defense reac-tions, ABA responses, vesicle transport, cell polarity, and the growth of pollen tubes and root hairs. Present knowledge about the role of small G-proteins in plants is still at an early stage.

Ca2+  is a component of signal transduction chains

In animal cells as well as in plant cells, the cytosolic concentration of free Ca2+ is normally lower than 10–7 mol/L. These very low Ca2+ concentra-tions are maintained by ATP-dependent pumps, which accumulate Ca++ in the lumen of the endoplasmatic reticulum and the vacuole (in plants) or transport Ca2+ via the plasma membrane to the extracellular compartment (Fig. 19.3). Alternatively, Ca2+ can be taken up into mitochondria by H+ /Ca2+ antiporters. Signals (e.g., salt, ABA, dryness or coldness) induce Ca2+ channels in the endomembranes of intra-cellular stores to open for a short time, resulting in a rapid increase in the cytosolic concentration of free Ca2+ . In almost all cells free Ca2+ stimulates regulatory enzymes such as protein kinases that are often components of signal cascades regulating a multitude of cellular processes.

The phosphoinositol pathway controls the opening of Ca2+ channels

Ca2+ channels can be controlled by the phosphoinositol signal transduction cascade (Fig. 19.4), which has initially been resolved in animal metabolism, but has also been shown to exist in plants. Phosphatidyl inositol is present, although in relatively low amounts, as a constituent of cell membranes. In animal cells, the two fatty acids of phosphatidyl inositol are usually stearic acid and arachidonic acid. The inositol residue is phosphorylated at the hydroxyl groups in 4’ and 5’ position by a kinase. Phospholipase C, stimu-lated by a G-protein, cleaves the lipid to inositol-1,4,5-trisphosphate (IP3) and diacylglycerol (DAG). IP3 causes a rise in the cytosolic Ca2+concentra-tion, whereas in animals diacylglycerol stimulates a Ca2+ -dependent pro-tein kinase. In plants, diacylglycerol as such does not seem to play a role in the metabolism. However, it has an indirect effect, since phosphatidic acid (Fig. 15.5) deriving from the phosphorylation of diacylglycerol affects pro-tein kinases and ion channels. 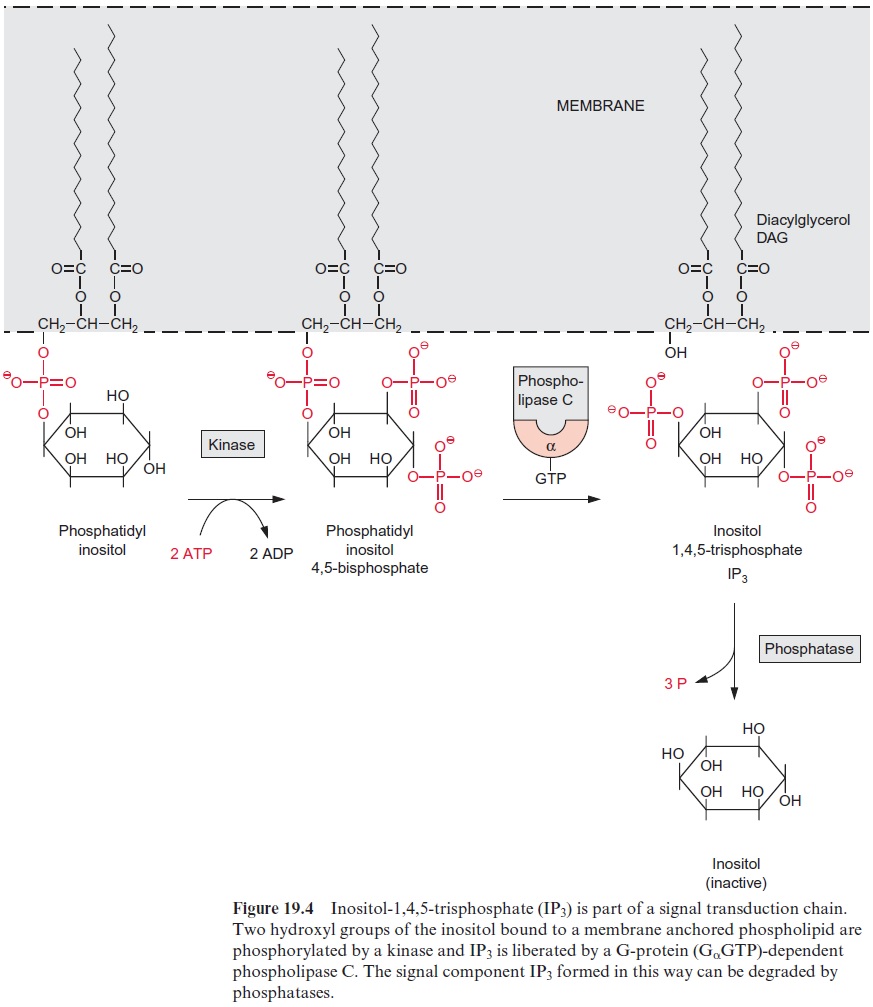 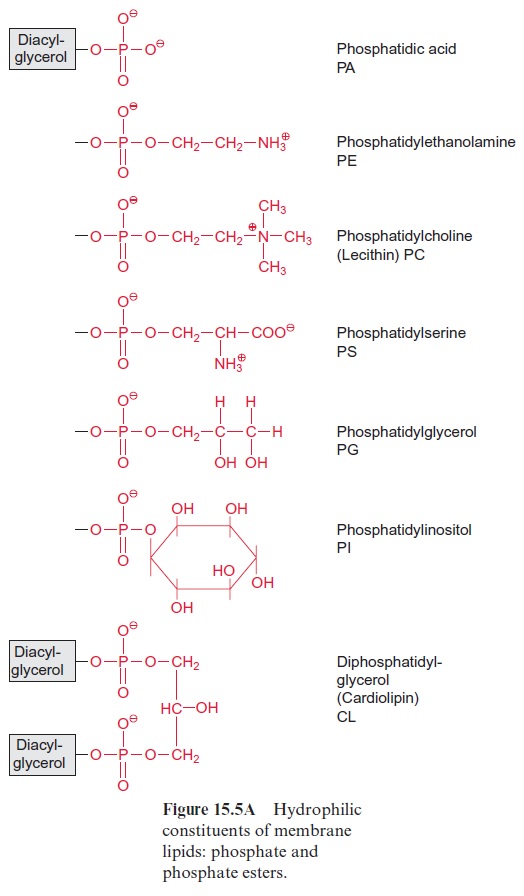 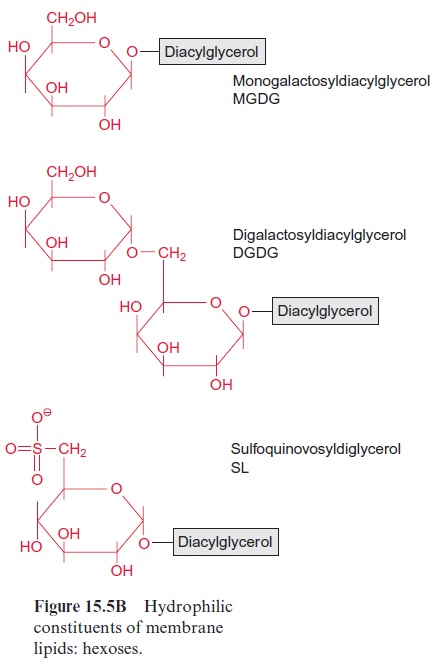 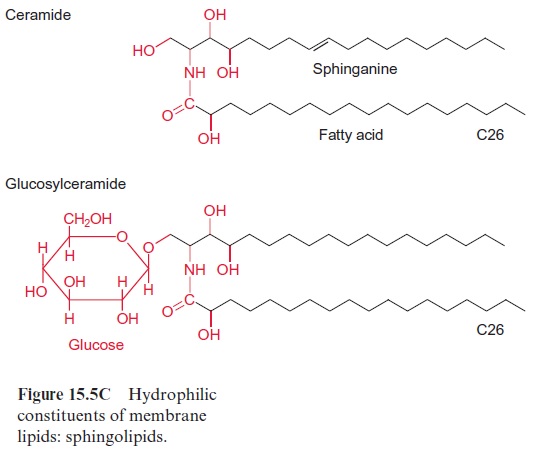 Patch-clamp studies  demonstrated that in plant vacu-oles and other Ca2+ stores, such as the endoplasmatic reticulum, IP3 causes Ca2+channels to open. The rapid influx of Ca2+ into the cytosol is limited by the very short life of IP3 (often less than 1 s). The rapid elimination of IP3 proceeds either via additional phosphorylation of IP3 or the hydrolytic liberation of the phosphate groups by a phosphatase. The short lifetime of IP3 enables a very efficient signal transduction.

In plants the phosphoinositol cascade has an important role in trans-mitting signals from the environment to cellular functions (e.g., in adjust-ing the stomata opening to the water supply). A specific kinase has been identified in plants, which catalyzes the phosphorylation of phosphatidyl inositol to phosphatidyl inositol-3-phosphate. This modified membrane lipid functions as a signal for vesicle transfer (Fig. 1.16) (e.g., in the transfer of hydrolytic enzymes from the ER to the vacuole).

Ca2+ often does not act directly as a signal component but by binding to calmodulin. Calmodulin is a soluble protein (molecular mass 17 kDa) that occurs in animals as well as in plants. It is a highly conserved protein; the identity of the amino acid sequences between the calmodulin from wheat and cattle is as high as 91%. Calmodulin is present mainly in the cytosol. It consists of a flexible helix connecting the two loops of both ends. Each loop possesses a binding site for a Ca2+ ion and contains glutamate (E) and phenylalanine (F). For this reason these loops are designated EF hands (Fig. 19.5). The binding of Ca2+ to all four EF hands results in a conforma-tional change of calmodulin by which its hydrophobic domain is exposed. This domain interacts with certain protein kinases(calmodulin-binding kinases (CBK)), which are subsequently activated. The activated protein kinase-CBK II first catalyzes its own phosphorylation (autophosphoryla-tion), and then reaches its full activity, and even retains it after the disso-ciation of calmodulin, until the phosphate residue is released by hydrolysis.

Ca2+ -calmodulin also binds to other proteins, thus changing their activity, and is therefore an important component of signal transduction chains. 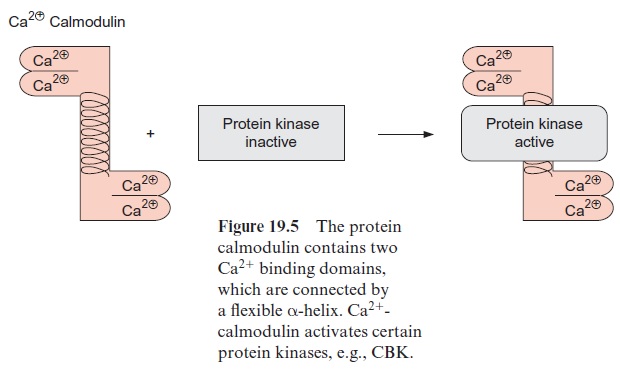 Moreover, plants encode a family of protein kinases, which possess Ca2+ -binding EF hands as essential domains of the protein. They are termed Ca2+ -dependent protein kinases (CDPK). By now more than 30 genes of the CDPK-family have been detected inArabidopsis, although the function of part of them is still not known. CDPK kinases are involved in the phosphorylation of sucrose phosphate synthase (Fig. 9.18) and nitrate reductase (Fig. 10.9), pathogen defense reaction, and the response to vari-ous abiotic stresses. 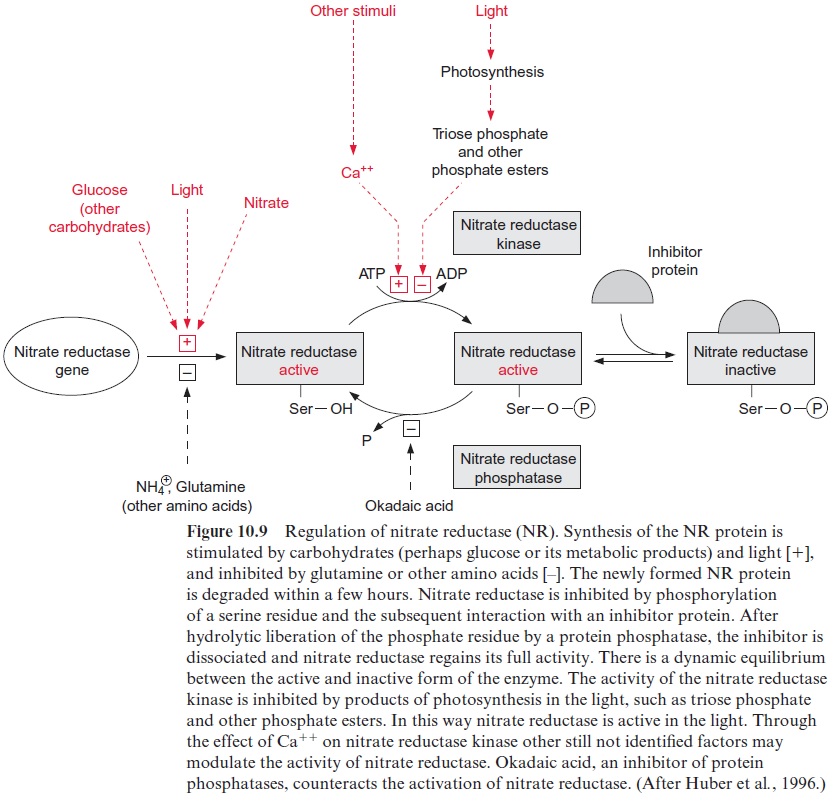 There are also other proteins with calmodulin domains, the so-called calmodulin-related proteins (CRK), but their functions are to a large extent not known.

Protein kinases, several of which have been discussed previously, and protein phosphatases are important elements in the regulation of intracellular proc-esses. Phosphorylation and dephosphorylation change proteins between two activity states. Similarly many protein kinases are switched on or off by phosphorylation; therefore protein kinases represent a network of on-off switches in the cell, comparable to those of computer chips. These switches control differentiation, metabolism, defense against pests, and many other cell processes. It is estimated that in a eukaryotic cell 1% to 3% of the func-tional genes encode protein kinases. Initially protein kinases were investi-gated primarily in yeast and animals, but in the meantime several hundred genes encoding protein kinases have been identified in plants, although the physiological functions of only some of them are known. The elucidation of the interacting cellular components of protein kinases is at present a dynamic field in plant biochemistry. 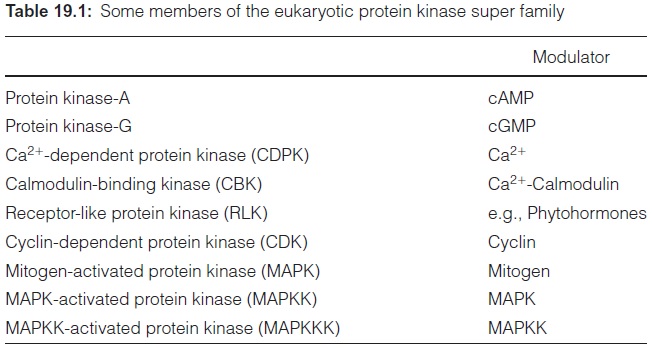 The superfamily of eukaryotic protein kinases also encompasses the cyclin-dependent-protein kinases (CDK) (Table 19.1). Cyclinis a protein that is present in all eukaryotic cells, as it has an essential function in the cell cycle. CD kinases activate a number of proteins that are involved in mito-sis. Additional members of the superfamily are the mitogen-activated-protein kinases (MAPK).Mitogen is a collective term for a variety of compounds, many of them of unknown structure, which stimulate mitosis, and thus the cell cycle, but also other reactions. G-proteins and phytohormones may act as mitogens. MAPKs play an important role in protein kinase cascades, where protein kinases are regulated through phosphorylation by other pro-tein kinases. In such a cascade, a G-protein, for example, activates an MAP-kinase-kinase-kinase (MAPKKK), which activates by phosphorylation an MAP-kinase-kinase (MAPKK), which activates an MAP-kinase (MAPK). The MAP-kinase in turn phosphorylates various cellular components. In a plant several of these signal cascades with different target proteins operate in parallel. Some of the cascade components overlap. The signal cascades regulate the expression of different genes by phosphorylation of a series of transcription factors. The MAP-kinase-cascade thus has an important regulatory function in the process of cell development and differ-entiation. Moreover, the MAP-kinase system is also involved in the signal cascades of pathogen defense systems, which are triggered by elicitors (sec-tion 16.1), and in the response to abiotic stress (e.g., heavy metals, salt, dry-ness, coldness, wounding). Genome sequencing revealed that 20 MAPKs, 10 MAPKKs, and 60 MAPKKKs exist in Arabidopsis.

Recently, protein kinases have been identified that phosphorylate histidine and aspartate residues of proteins and which do not belong to the superfamily mentioned previously. His-tidine protein kinases are involved in the function of the receptors for eth-ylene and cytokinin. 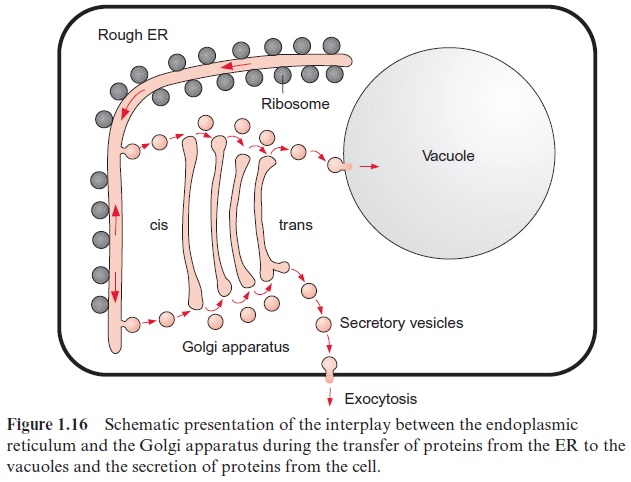 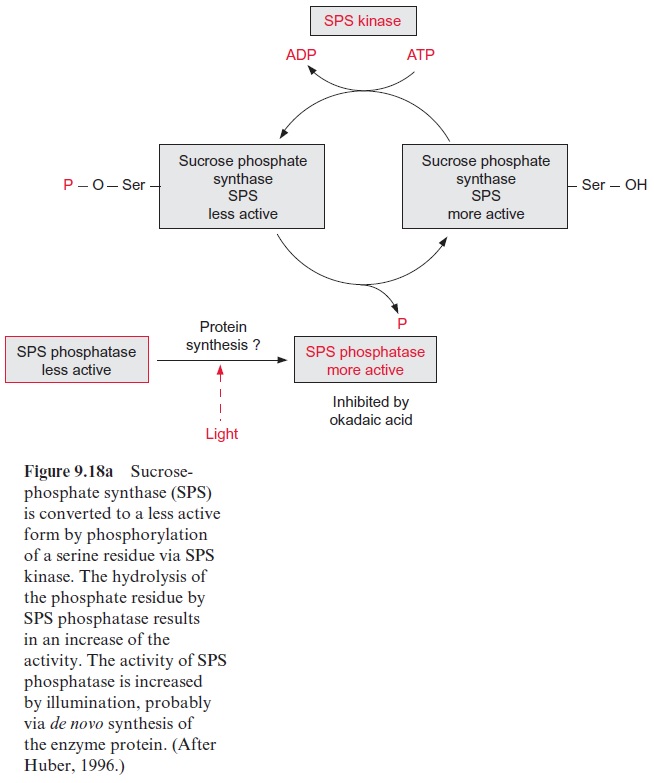 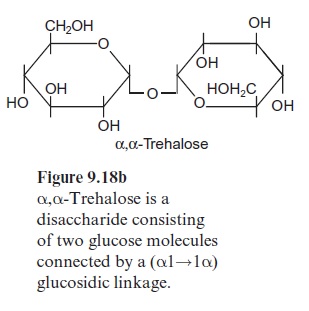