The discovery of gibberellins is related to a plant disease. The infection of rice by the fungus Gibberella fujikuroi results in the formation of extremely tall plants that fall over and bear no seeds.

The discovery of gibberellins is related to a plant disease. The infection of rice by the fungus Gibberella fujikuroi results in the formation of extremely tall plants that fall over and bear no seeds. In Japan this disease was called “foolish seedling disease.” In 1926 Eiichi Kurozawa and collabora-tors (Japan) isolated a compound from this fungus that induces unnatu-ral growth. It was namedgibberellin. These results were known in the West only after World War II. Structural analysis revealed that gibberellin is a mixture of various compounds with similar structures, which also occur in plants and act there as phytohormones.

Gibberellins are derived from the hydrocarbon ent-gibberellane (Fig. 19.9). More than 100 gibberellin derivatives are now known in plants, which are numbered in the order of their identification. Therefore the num-bering gives no information about structural relationships or functions. Many of these gibberellins are intermediates or by-products of the bio-synthetic pathway. Only a few of them have been shown to act as phyto-hormones. Whether other gibberellins have a physiological function is not known. The most important gibberellins are GA1 (Fig. 19.10A) and GA4 (not shown). Gibberellins derive from isoprenoids . The syn-thesis proceeding in 13 steps takes place in three compartments. At first geranylgeranyl pyrophosphate is converted in the plastids to ent-kaurene. Subsequently ent-kaurene is transformed to GA12-aldehyde by a cyt-P450 monooxygenase located in the membrane of the endoplasmatic reticulum (ER) . Finally gibberellin (GA12) is synthesized in the cytosol. This reaction involves the catalysis by oxoglutarate-dependent dioxygen-ases (GA oxidases). 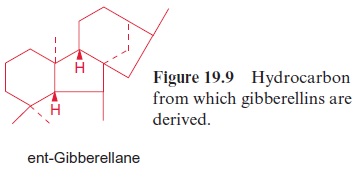 Similar to IAA, gibberellins stimulate shoot elongation, especially in the internodes of the stems. A pronounced gibberellin effect is that it induces rosette plants (e.g., spinach or lettuce) to initiate and regulate the forma-tion of flowers and flowering. Additionally, gibberellins have a number of other functions such as the preformation of fruits and the stimulation of their growth. Gibberellins terminate seed dormancy, probably by soften-ing the seed coat, and facilitate seed germination by the expression of genes for the necessary enzymes (e.g., amylases). 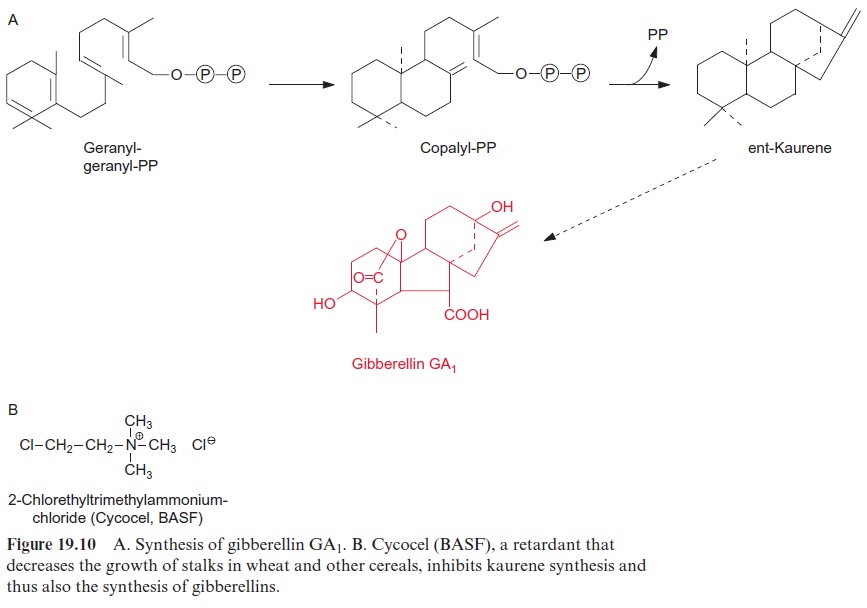 The use of gibberellins is of economic importance for the production of long, seedless grapes. In these grapes, GA1 causes not only extension of the cells, but also parthenocarpy (the generation of the fruit as a result of partho-genesis). Moreover, in the malting of barley for beer brewing, gibberellin is added to induce the formation of -amylase in the barley grains. The gib-berellin GA3, produced by the fungus Gibberella fujikuroi, is generally used for these purposes. Inhibitors of gibberellin biosynthesis are commercially used as retardants (growth inhibitors). A number of substances that inhibit the synthesis of the gibberellin precursor ent-kaurene, such aschloroethyl­ trimethyl ammonia chloride (trade name Cycocel, BASF) (Fig. 19.10B) are sprayed on cereal fields to decrease thegrowth of the stalks. This enhances the strength of the cereal stalks and at the same time increases the proportion of total biomass in seeds. Slowly degradable gibberellin synthesis inhibitors are used in horticulture to keep indoor plants small.

Gibberellins influence gene expression. A soluble protein (GID1), which resembles a hormone-sensitive lipase, has been identified as a GA receptor. Arabidopsis contains three genes for GID1 proteins. When GA binds to this receptor, the complex then transmits the information to so-called cytosolic DELLA proteins. The latter usually repress plant growth. In this way the binding of GA to the receptor ultimately leads to an increase of gene expression, resulting in an increase of elongation growth. Thus, GA causes the relief of a restraint.

Mutants, in which the synthesis of GA or the function of GA on growth was impaired, turned out to be important for agriculture. The dramatic increase in the yield of cereal crops achieved after 1950, often named the “green revolution,” is in part due to the introduction of dwarf wheat lines. At that time, attempts to increase the crop yield of traditional wheat vari-eties by an increased application of nitrogen fertilizer failed, since it pro-duced more straw biomass instead of enhancing the grain yield. This was averted by breeding wheat varieties with reduced stalk growth, where the portion of grains in the total biomass (harvest index) was increased considerably. It turned out that the decreased stalk growth in these varie-ties was due to the mutation of genes encoding transcription factors of the gibberellin signal transduction chain. In wheat, the mutated genes have been termed Rht (reduced height).