Abscisic acid controls the water balance of the plant

When searching for what causes the abscission of leaves and fruits, abscisic acid (ABA) (Fig. 19.12) was found to be an inducing factor and was named accordingly.

Abscisic acid controls the water balance of the plant

When searching for what causes the abscission of leaves and fruits, abscisic acid (ABA) (Fig. 19.12) was found to be an inducing factor and was named accordingly. Later it turned out that the formation of the abscission layer for leaves and fruits is induced primarily by ethylene . An important function of the phytohormone ABA, however, is the induction of dormancy (endogenic rest) of seeds and buds. Moreover, ABA has a major function in maintaining the water balance of plants, since it induces with nitric oxide (NO) the closure of the stomata during water shortage . In addition, ABA prevents germination before the seeds are mature (vivipary). ABA deficient tomato mutants have wilting leaves and fruits, due to the disturbance of the water balance. In these wilting mutants, the immature seeds germinate within the tomato fruits while they are still attached to the mother plant. 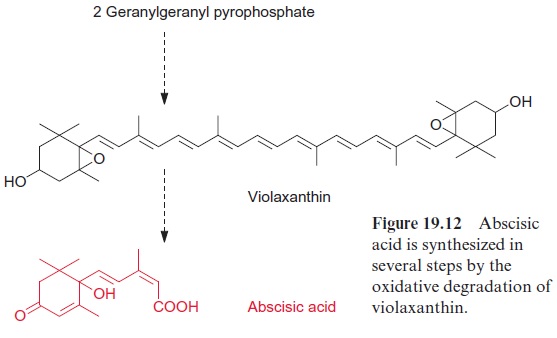 ABA is a product of isoprenoid metabolism. The synthesis of ABA pro-ceeds in two different ways via oxidation of violaxanthin(Fig. 19.12, see also Fig. 3.41). ABA synthesis occurs in leaves and also in roots, where water shortage would have a direct impact. ABA can be transported by the transpiration stream via the xylem vessels from the roots to the leaves, where it induces closure of the stomata . 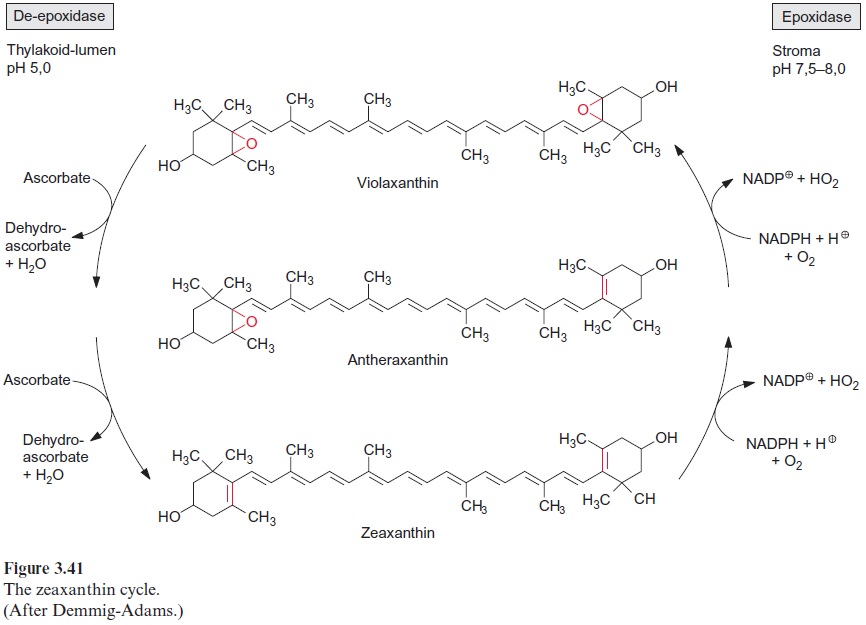 In leaves, beside stoma closure ABA also causes rapid alterations in metabolism by influencing gene expression. Two ABA receptors have been identified, a soluble receptor named FCA (f owering time control) and a membrane bound receptor GRC2 (G-protein coupled receptor). The for-mation of the soluble FCA-ABA complex causes a delay in flowering. The ABA-GRC2 complex reacts with a G-protein . The release of a Gα -subunit regulates the K+ -dependent stoma closure and also embryo development. There is, however, yet another signal chain for ABA action involving the release of Ca2+ ions via the phosphoinositol pathway with the participation of phospholipase C (Fig. 19.13) and the signal component cyclic ADP ribose (cADPR, Fig. 19.13). 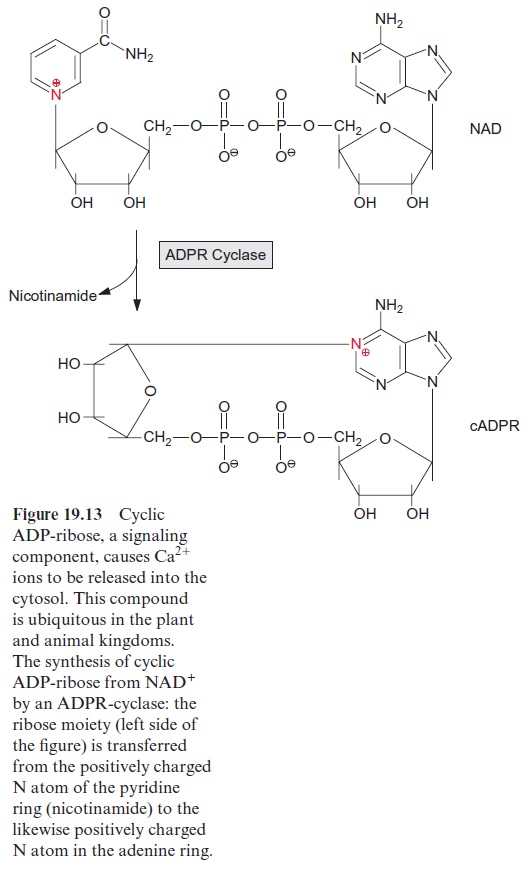