For a long time many steroid hormones with a multitude of effects have been known in animals, but only recently was it discovered that steroid hor-mones also occur in plants.

For a long time many steroid hormones with a multitude of effects have been known in animals, but only recently was it discovered that steroid hor-mones also occur in plants. So-called brassinosteroids have essential func-tions as phytohormones. Brassinolide(Fig. 19.15) is the most well-known member of this phytohormone class. In the meantime more than 40 other polyhydroxylated steroids have been identified in plants. Brassinosteroids are synthesized via the isoprenoid biosynthesis pathway with the membrane lipid campesterol (Fig. 15.3) as intermediate. Brassinosteroids are contained in all plant organs and regulate the plant development in multiple ways. They stimulate the growth of the shoot, the unfolding of leaves, the dif-ferentiation of the xylem, retardation of root growth and the formation of anthocyans. 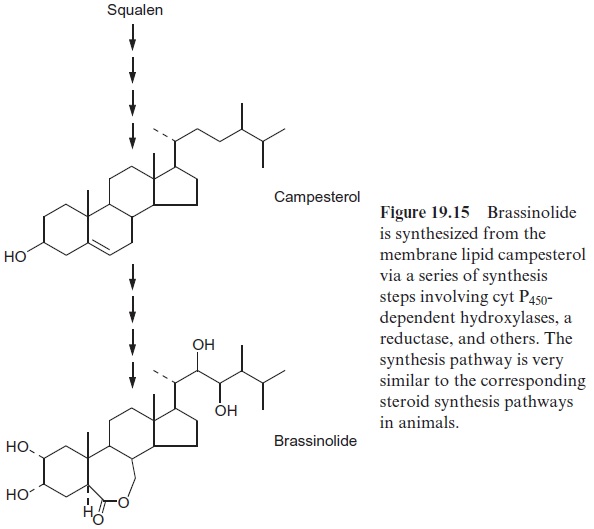 Brassinosteroids were first isolated from pollen. It was known that pol-len contains a growth factor. In 1979 scientists from the US Department of Agriculture isolated from 40 kg of rape pollen collected by bees, 4 mg of a substance that they identified as brassinolide. Later, using very sensitive analysis techniques, it was shown that plants in general contained brassino-lide and other brassinosteroids. The function of brassinosteroids as essen-tial phytohormones was clearly established from the study of Arabidopsismutants with developmental defects, such as dwarf growth, reduced apical dominance, and lowered fertility. The search for the defective gene respon-sible revealed that such mutations affected enzymes of the brassinolide synthesis pathway, which turned out to have very great similarities with the synthesis pathway of animal steroid hormones. These developmental defects could not be prevented by the addition of “classic” phytohormones, but only by an injection of a nanomolar amount of brassinolide, as con-tained in plants. These results clearly demonstrated the essential function of brassinosteroids for the growth and development of plants. 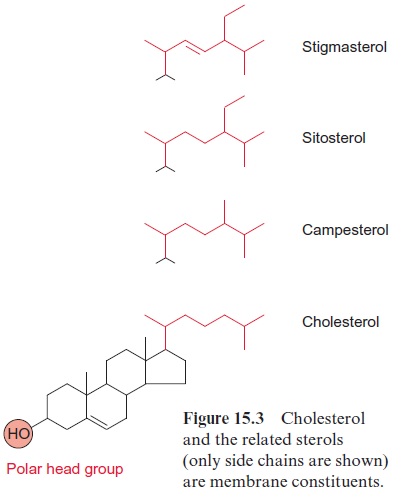 In animal cells, steroid hormones bind to defined steroid receptors, which are present in the cytoplasm. Once activated, the receptor complex is trans-ferred to the nucleus to promote or repress the expression of certain genes. It seems that plant steroids do not function in this way, as plants lack homologues of animal steroid receptors. In plants the steroid hormones associate with receptors bound to the plasma membrane. These receptors belong to the class of leucin rich repeat receptor-like kinases (LRR-RLK,). Via a signal cascade, not fully resolved and involving several protein kinases and transcription factors, genes are activated which govern, e.g., cell modification, the synthesis of the cytoskeleton and the synthesis and transport of other phytohormones.

It is well known that small peptides, such as insulin and glucagon, have an important function in the intercellular communication in animals. Peptide hormones also play a role in plants. There is increasing evidence that plants contain secretory and nonsecretory peptides involved in the regulation of various aspects of plant growth (e.g., growth of callus and roots, organi-zation of the meristem, nodule formation, self-incompatibility and defense reactions).

Many plants respond to insect attacks by accumulating proteinase inhibitors, which are toxic to insects because they impair their digestion of proteins. It was shown in tomato plants that the polypeptide systemin, consisting of 18 amino acids, is involved in defense reactions. In response to insect attack, a systemin precursor protein, consisting of 200 amino acids, is syn-thesized, and then processed by endoproteases to release the active polypep-tide. Systemin is perceived by a membrane-bound receptor of very high affinity. A systemin concentration of as low as 10–10 mol/L is sufficient for a half saturation of the receptor. The receptor was identified as a receptor-like kinase (RLK) , similar to the LRR-RLK that binds brassinoid steroids. The binding of systemin induces a signal transduction chain involving Ca2+ calmodulin accumulation, the inactivation of an H - P-ATPase, the activation of MAPK protein kinases and of a phospholipase . The latter catalyzes the release of linolenic acid from mem-brane lipids, which is a precursor for the synthesis of jasmonic acid (sec-tion 15.7). Jasmonic acid is a key signal in the transcription activation of defense-related genes (e.g., for the synthesis of proteinase inhibitor) (sec-tion 19.9). It may be noted that the effect of systemin is species specific. Systemin from tomato also affects potato and pepper, but it has no effect on the closely related tobacco or on other plants. Tobacco produces a systemin-like polypeptide, with a structure similar to the tomato systemin, and has analogous effects. It remains to be elucidated whether systemin-like polypeptide hormones may be involved in defense reactions of other plants.

A factor enhancing the proliferation of the cells was found in media of cell suspension cultures. This factor was isolated and identified as a pen-tapeptide, named phytosulfokine (PSK) containing two tyrosine residues, of which the hydroxyl group is esterified with sulfate:

The Arabidopsis genome has five genes encoding phytosulfokine precur-sors consisting of about 80 amino acids and an N-terminal secretion signal. Phytosulfokines with identical structures occur in many plants and have, in addition to auxin and cytokinins, an important regulatory effect on the dedifferentiation of cells. Plant cells can retain the ability of totipotency, which means that cells can dedifferentiate so that they can reenter the cell cycle to form all the organs of a new plant. A receptor-like protein kinase (RLK) has been identified as a receptor for phytosulfokines and is probably connected via signal cascades to transcription factors regulating genes of dedifferentiation and proliferation.

A small protein causes the alkalization of cell culture medium

In the course of the isolation of systemin another peptide of 49 amino acids (deriving from a precursor of 115 amino acids) was identified that caused a rapid alkalization of the media of tobacco cell suspension cultures. This peptide was called RALF (rapid alkalization factor). The applica-tion of RALF in nanomolar concentrations resulted in a rapid activation of MAPK, the termination of root growth and the enlargement of meris-tematic cells. Homologues of RALF are found in many plant species. In Arabidopsis, nine different RALF genes have been identified that are expressed in different organs of the plant. The ubiquity of RALF polypep-tides suggests that they play a general role in plants, which remains to be elucidated.

Self-incompatibility is a mechanism ensuring that the pollen does not self-fertilize or fertilizes the same or closely related plants. Various plants have different methods for excluding self-fertilization. In Brassica species, for example, S-locus proteins are involved, including SL glycoproteins (SLG), SL receptor kinases (SRK) and small proteins (SCR) of 74–81 amino acids. The application of only 50×10 -12 mol of a recombinant SCR protein to a stigma resulted in the inhibition of the hydration of the pollen, which pre-vents it from being fertilized. It was also shown that SCR proteins interact with an RLK receptor kinase SLK, resulting in an autophosphorylation. Other elements of the signal cascade remain to be elucidated. Characteristic for the small SCR proteins are four disulfide linkages between cysteine resi-dues C1 and C8, C2 and C5, C3 and C6, and C4 and C7.