Ethylene is involved in the induction of senescence. During senescence, the degradation of leaf material is initiated.

Ethylene is involved in the induction of senescence. During senescence, the degradation of leaf material is initiated. Proteins are degraded to amino acids, which, together with certain ions (e.g., Mg2+ ), are withdrawn from the senescing leaves via the phloem for reutilization. In perennial plants, these substances are stored in the stem or in the roots, and in annual plants they are utilized to enhance the formation of seeds. Ethylene induces defense reactions after infection by fungi or when plants are wounded by feeding animals. As an example, the induction of the synthesis of tannins by ethylene in acacia as a response to feeding antelopes.

In addition to stimulating the abscission of fruit, ethylene has a general function in fruit ripening. The ripening of fruit is to be regarded as a special form of senescence. The effect of gaseous ethylene can be demonstrated by placing a ripe apple and a green tomato together in a plastic bag; ethylene produced by the apple accelerates the ripening of the tomato. Bananas are harvested green and transported halfway around the world under condi-tions that suppress ethylene synthesis (low temperature, CO2 atmosphere). Before being sold, these bananas are ripened by gassing them with ethylene. Also, tomatoes are often ripened only prior to sale by exposure to ethylene.

S-adenosylmethionine (Fig. 12.10) is a biological methyl group donor as well as the precursor for the synthesis of ethylene (Fig. 19.14). The posi-tive charge of the sulfur atom in S-adenosylmethionine enables its cleav-age to form a cyclopropane, in a reaction catalyzed by aminocyclopropane carboxylate synthase, abbreviated ACC synthase. This enzyme limits the rate of ethylene biosynthesis. The fact that Arabidopsis contains eight genes for this enzyme illustrates its importance. The amount and stability (half life time 20 min–2 h) of ACC synthase is regulated by MAPK and CDPK phosphoryla-tion . Subsequently, ACC oxidase catalyzes the oxidation of the cyclopropane to ethylene with the release of CO2, HCN, and water. HCN is immediately detoxified by conversion to β-cyanoalanine (reaction not shown). 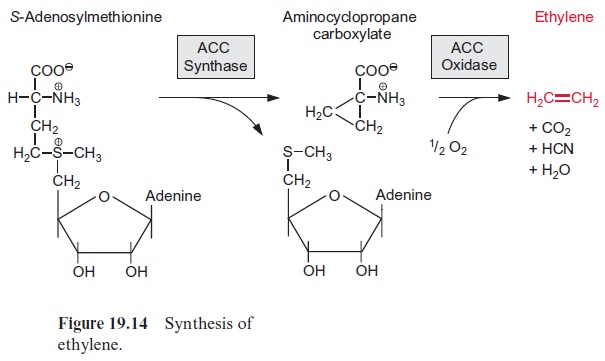 Genetic engineering has been employed to suppress ethylene synthesis in tomato fruits in two different ways. One possibility is to decrease the activities of ACC synthase and ACC oxidase by antisense technique . Another alternative is the introduction of a bacterial gene into the plants, which encodes an ACC deaminase. This enzyme degrades the ACC in the tomato fruits so rapidly that consequently the ethylene levels are significantly reduced. The aim of this genetic engineering is to produce tomatoes that delay the ripening process during transport. It may be noted that transgenic tomato plants have also been generated, in which the durability of the har-vested fruits is prolonged by an antisense repression of the polygalacturoni-dase, which is an enzyme that plays a role in lysing the cell wall.

The effect of ethylene is caused by an alteration of gene expression. Since ethylene, like other phytohormones, exerts its effect at very low con-centrations (~10 9 mol/L), the ethylene receptor is expected to have a very high affinity. Like the cytokinin receptor, it consists of a dimer of histidine receptor kinases, each containing a histidine residue, which, after autophos-phorylation, transfers the phosphate group to histidine or aspartyl resi-dues of target proteins. By the binding of ethylene to the receptor dimer, in which a copper cofactor is involved, the kinase is inactivated and auto-phosphorylation is prevented. Depending on the phosphorylation state of the ethylene receptor, a signal is transmitted via protein kinase cascades, in which MAPKK and MAPK  participate. This activates signal cascade transcription factors which control the expression of certain genes. It may be noted that histidine kinases occur in plants, yeast, and bacteria, but not in animals.

The signal cascades of the action of ethylene, auxin, cytokinins, brassi-nosteroids, gibberellins, abscisic acid, and of abiotic stress are interwoven to a network.