Charles Darwin and his son Francis had already observed in 1880 that growing plant seedlings bend towards sunlight. They found that illumina-tion of the tip initiated the bending of seedlings of canary grass (Phalaris canariensis).

Charles Darwin and his son Francis had already observed in 1880 that growing plant seedlings bend towards sunlight. They found that illumina-tion of the tip initiated the bending of seedlings of canary grass (Phalaris canariensis). Since the growth zone is only a few millimeters from the tip, they assumed that a signal is transmitted from the tip to the growth zone. In 1926 the Dutch researcher Frits Went isolated from the tip of oat seed-lings a growth-stimulating compound, which he named auxin and which was later identified asindoleacetic acid (IAA). Besides IAA, some other compounds are known with auxin properties (e.g., phenylacetic acid) (Fig. 19.8). The synthesis of IAA occurs not only in the shoot but also in the root. Different biosynthesis pathways are operating in different plants. Figure 19.7 shows two of these pathways. 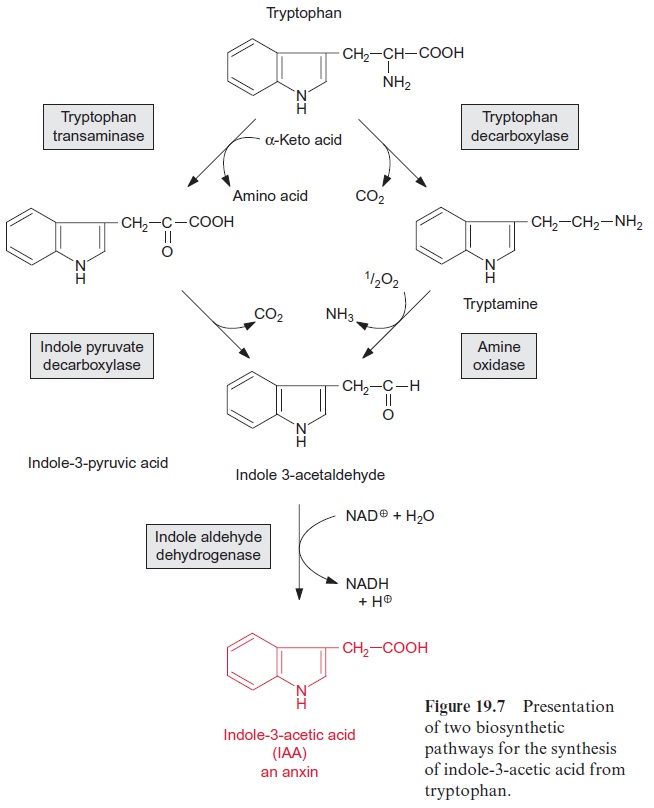 The synthetic auxin 2,4-dichlorophenoxyacetic acid (2,4-D, Rohm & Haas) is used as a herbicide. It kills plants by acting as an especially pow-erful auxin, resulting in disordered morphogenesis and an increased syn-thesis of ethylene, which leads to a premature senescence of leaves. In the Vietnam War it was used as Agent Orange to defoliate forests. 2,4-D is a selective herbicide that destroys dicot plants. Monocots are insensitive to it, because they eliminate the herbicide by degradation. For this reason, 2,4-D is used for combating weeds in cereal crops. 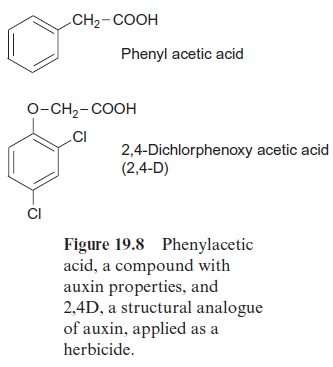 Auxin functions in many ways. It influences embryogenesis, all types of organogenesis, maintenance of the root meristem, differentiation of vascu-lar tissue, elongation growth of hypocotyls and roots, curvature of the cole-optiles, apical dominance, fruit ripening and the effects of the environment on plant growth. For a long time it was not clear how auxin was able to affect all these different processes. The key to this is the polar transport of auxin between different cells, resulting in its asymmetric accumulationin tis-sues and cells. Auxin is primarily synthesized at the tip of the shoot. From there it is transported from cell to cell by specificinflux and efflux carriers of the plasma membrane. The protonated form of IAA (IAAH) is transported by a proton driven influx carrier (AUX1) into the cell where it is depro-tonated and trapped. The efflux of IAA proceeds via another specific car-rier (PIN). The polar transport is caused by an asymmetric distribution of these carriers. The membrane-bound efflux carrier proteins are transferred in a reversible fashion between membrane regions by vesicle transport via the Golgi apparatus. In this way the efflux carriers can be moved rap-idly from one area of the plasma membrane to another to facilitate a polar transport. During the curvature of the coleoptiles, IAA is transported lat-erally to one side. The resulting differential stimulation of cell elongation at only one side of the shoot leads to the bending. IAA is also transported via the phloem from the leaves to distant parts of the plant.

The effect of IAA on cell growth in the shoot can be shown experi-mentally to occur within a few minutes after adding IAA. The hyperpo-larization of the cell and an increase of phospholipase activity result in the opening of Ca2+ channels . The subsequent activation of H+ - P-ATPases  leads to the acidification of the cell wall region and subsequently to a loosening of the normally rigid cell wall. Shortly thereaf-ter (15–30 min), the synthesis of proteins and xyloglucans begins, both as part of the epidermal cell wall synthesis and the elongation growth.

The auxin receptor (TIR) has been identified recently. The binding of auxin to this receptor recruits AUX/IAA transcription factors, which at low auxin concentrations together with other transcrip-tion factors (ARF) repress the expression of certain genes. Increased auxin concentrations result in a derepression of these genes and the formation of auxin-inducible proteins. AUX/IAA transcription factors have a very short lifetime and are degraded in the proteasome after conjugation with ubiquitin. For this reason the AUX/IAA proteins are very well suited to function as on/off switches. A plant contains many genes of these TIR and AUX/IAA proteins, which explains the large repertoire of diverse auxin effects in different tissues.

In different tissues and organs IAA has different cellular impacts. IAA stimulates cell division in the cambium, enhances apical dominance by suppression of lateral bud growth, and controls embryo development. Moreover, IAA prevents the formation of an abscission layer for leaves and fruits and is thus an antagonist to ethylene . On the other hand, increased IAA concentrations can induce the synthesis of ethylene.

Moreover, auxin induces the formation of fruits. Normally, seeds pro-duce IAA only after fertilization. Transformants of eggplants that express a bacterial enzyme of IAA synthesis in the unfertilized seed were generated by genetic engineering. This IAA prevents the formation of seeds, result-ing in seedless eggplants of normal consistency which are four times larger than usual. This is an impressive example of the importance of auxin for fruit growth and shows the possibilities of generating genetically altered vegetables.