Cytokinins are prenylated derivatives of adenine. In zeatin, which is the most common cytokinin, the amino group of adenine is linked with the hydroxylated isoprene residue in the trans-position.

Cytokinins are prenylated derivatives of adenine. In zeatin, which is the most common cytokinin, the amino group of adenine is linked with the hydroxylated isoprene residue in the trans-position (Fig. 19.11). In other cytokinins benzyl derivatives, sugars or sugar phosphates are attached to the adenine. Cytokinins enhance plant growth by stimulating cell division and increase the sprouting of lateral buds. As cytokinins override api-cal dominance, they are antagonists of the auxin IAA. Cytokinins retard senescence and thus counteract the phytohormone ethylene . The larvae of some butterflies (e.g., Stigmella, which invade beech trees) use this principle for their nutrition. They excrete cytokinin with their saliva and thus prevent senescence of the leaves on which they are feeding. As a result, green islands of intact leaf material remain in yellowing autumn leaves, which provide, beyond the actual vegetation period, the caterpillars with the forage they need to form pupae. 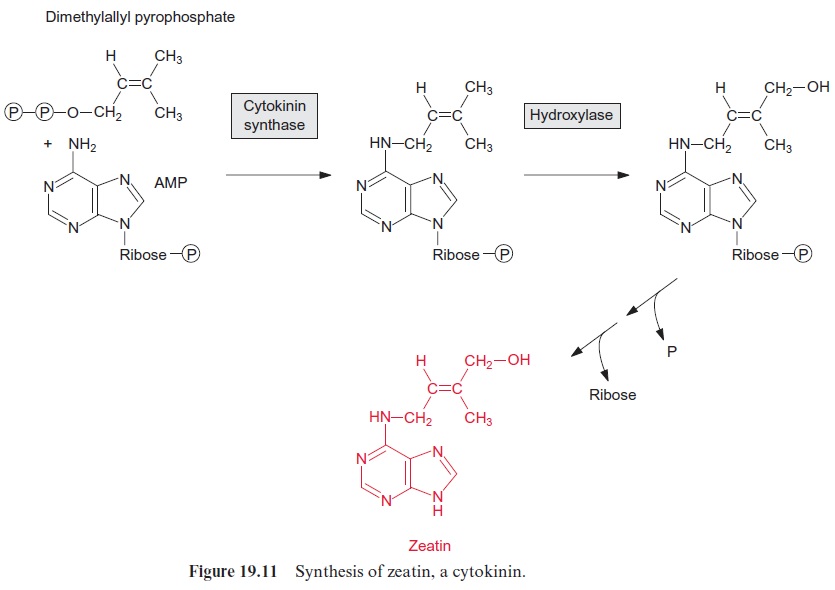 Mature (i.e., differentiated) plant cells normally stop dividing. By add-ing cytokinin and auxin, differentiated cells can be induced to initiate cell division again. When a leaf piece is placed on a solid culture medium con-taining auxin and cytokinin, leaf cells start unlimited growth, resulting in the formation of a callus that can be propagated in tissue culture. Upon the application of a certain cytokinin/auxin ratio, a new shoot can be regener-ated from single cells of this callus.

In nature some plant associated bacteria and fungi produce auxin and cytokinin to induce unlimited cell division, which results in tumor growth of the plant. The formation of the crown gall induced by Agrobacterium tumefaciens is caused by a stimulation of the production of cytokinin and auxin. The bacterium does not produce these phytohor-mones itself, but transfers the genes for the biosynthesis of cytokinin and auxin from its Ti plasmid to the plant genome.

Zeatin is formed from AMP and dimethyallylpyrophosphate (Fig. 19.11). The isoprene residue is transferred by cytokinin synthase to the amino group of the AMP and is then hydroxylated. Cytokinin synthesis takes place primarily in the meristematic tissues. Transgenic tobacco plants in which the activity of cytokinin syn-thase in the leaves is increased have a much longer lifespan than normal plants, since their senescence is suppressed by the enhanced production of cytokinin.

Cytokinin receptors, like ethylene receptors, are dimeric histidine kinases. They are located in the plasma membrane, where the receptor site is directed to the extracellular compartment and the kinase is directed to the cytoplasm. The kinase moiety of the dimer comprises two histi-dine residues and two aspartyl residues. Upon binding of cytokinin, the two histidine kinases phosphorylate their histidine residues reciprocally (autophosphorylation). Subsequently, the phosphate groups are transferred to histidine residues or aspartyl residues of transmitter proteins (signal components). The transmitter proteins are channeled into the nucleus, where they function as transcription factors and thus regulate the expres-sion of many genes.