Home | | Biotechnology Applying the Genetic Revolution | Screening the Library of Genes by Hybridization
Posted On :  01.06.2017 09:51 am

Screening the Library of Genes by Hybridization

Once the library is assembled, researchers often want to identify a particular gene or segment of DNA within the library. Sometimes the gene of interest is similar to one from another organism.

SCREENING THE LIBRARY OF GENES BY HYBRIDIZATION

a common signature sequence whether they come from bacteria or humans. This sequence can be used to find other enzymes that bind ATP. Such common sequence motifs may also suggest that a protein will bind various cofactors, other proteins, and DNA, to name a few examples.

Screening DNA libraries by hybridization requires preparing the library DNA and preparing the labeled probe. A gene library is stored as a bacterial culture of E. coli cells, each having a plasmid with a different insert. The culture is grown up, diluted, and plated onto many different agar plates so that the colonies are spaced apart from one another. The colonies are transferred to a nylon filter and the DNA from each colony is released from the cells by lysing them with detergent. The cellular components are rinsed from the filters. The DNA sticks to the nylon membrane and is then denatured to form single strands (Fig. 3.20). 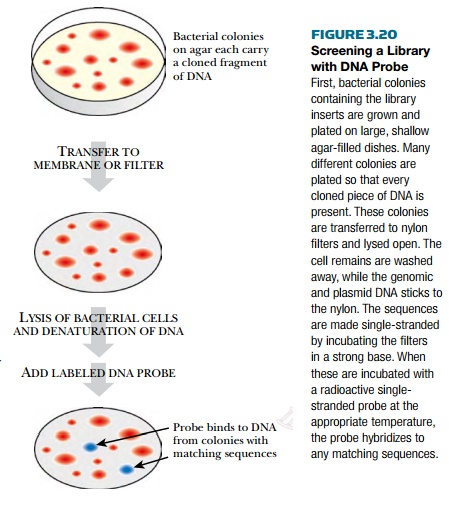 If a scientist is looking for a particular gene in the target organism, the probe for the library may be the corresponding gene from a related organism. The probe is usually just a segment of the gene, because a smaller piece is easier to manipulate. The probe DNA can be synthesized and labeled either with radioactivity or with chemiluminescence. The probe is heated to make it single-stranded and mixed with the library DNA on the nylon filters. The probe hybridizes with matching sequences in the library. The level of match needed for binding can be adjusted by incubating at various temperatures. The higher the temperature, the more stringent, that is, the more closely matched the sequences must be. The lower the temperature, the less stringent. If the probe is labeled with radioactivity, photographic film will turn black where the probe and library DNA hybridized. The black spot is aligned with the original bacterial colony. Usually the most likely colony plus its neighbors are selected, grown, plated, and rescreened with the same probe to ensure that a single transformant is isolated. Then the DNA from this isolate can be analyzed by sequencing.