Home | | Biotechnology Applying the Genetic Revolution | Hybridization of DNA or RNA in Southern and Northern Blots
Posted On :  01.06.2017 09:27 am

Hybridization of DNA or RNA in Southern and Northern Blots

HYBRIDIZATION OF DNA OR RNA IN SOUTHERN AND NORTHERN BLOTS

This is known as hybridization and can be used to determine whether sequences in two separate samples of DNA or RNA are related. In hybridization experiments, the term probe molecule refers to a known DNA sequence or gene that is used to screen the experimental sample or target DNA for similar sequences.

Southern blots are used to determine how closely DNA from one source is related to a DNA sequence from another source. The technique involves forming hybrid DNA molecules by mixing DNA from the two sources. A Southern blot has two components, the probe sequence (e.g., a known gene of interest from one organism) and the target DNA (often from a different organism). A typical Southern blot begins by isolating the target DNA from one organism, digesting it with a restriction enzyme that gives fragments from about 500 to 10,000 base pairs in length, and separating these fragments by electrophoresis. The separated fragments will be double-stranded, but if the gel is incubated in a strong acid, the DNA separates into single strands. Using capillary action, the single strands can be transferred to a membrane as shown in Fig. 3.10. The DNA remains single-stranded once attached to the membrane.

Next, the probe is prepared. First, the known sequence or gene must be isolated and labeled in some way (see earlier discussion). Identifying genes has become easier now that many genomes have been entirely sequenced. For example, a scientist can easily obtain a copy of a human gene for use as a probe to find similar genes in other organisms. Alternatively, using sequence data, a unique oligonucleotide probe can be designed that only recognizes the gene of interest. If an oligonucleotide has a common sequence, it will bind to many other sequences. Therefore, oligonucleotide probes must be long enough to have sequences that bind to only one (or very few) specific site(s) in the target genome. To prepare DNA probes for a Southern blot, they are labeled using radioactivity, 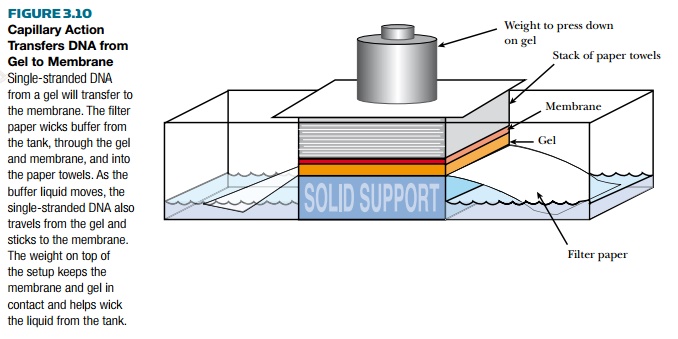 biotin, or digoxigenin (see earlier discussion). Finally, the labeled DNA is denatured at high temperature to make it single-stranded. (Synthetic oligonucleotides do not require treatment, as they are already single-stranded.)

hybrid DNA strands to form but allows a low amount of mismatching. The temperature, and hence the level of mismatching tolerated, can be varied depending on how specific a search is being run. If the probe is radioactive, then the membrane is exposed to photographic film. If the probe is labeled with biotin or digoxigenin, the membrane may be treated with chemiluminescent substrate to detect the labeled probe, and then exposed to photographic film. Dark bands on the film reveal the positions of fragments with similar sequence to the probe. Alternatively, biotin or digoxigenin labels may be visualized by treatment with a chromogenic substrate. In this case blue bands will form directly on the membrane at the position of the related sequences.

Northern blots are also based on nucleic acid hybridization. The difference is that RNA is the target in a Northern blot. The probe for a Northern blot is either a fragment of a gene or a unique oligonucleotide just as in a Southern blot. The target RNA is usually messenger RNA. In eukaryotes, screening mRNA is more efficient because genomic DNA has a lot of introns, which may interfere with probes binding to the correct sequence. Besides, mRNA is already single-stranded, so the agarose gel does not have to be treated with strong acid. Much like a Southern blot, Northern blots begin by separating mRNA by size using electrophoresis. The mRNA is transferred to a nylon membrane and incubated with a single-stranded labeled probe. As before, the probe can be labeled with biotin, digoxigenin, or radioactivity.

The membrane is processed and exposed to film or chromogenic substrate.

A variation of these hybridization techniques is the dot blot (Fig. 3.12). Here the target sample is not separated by size. The DNA or mRNA target is simply attached to the nylon membrane as a small dot. As in Southern blots, the DNA sample must be made single-stranded before it is attached to the membrane. As before, the dot-blot membrane is allowed to hybridize with a labeled probe. The membranes are processed and exposed to film. If the dot of DNA or mRNA contains a sequence similar to the probe, the film will turn black in that area. Dot blots are a quick and easy way to determine if the target sample has a related sequence, before more detailed analysis by Southern or Northern blotting. Another advantage of dot blots is that multiple samples can be processed in a smaller amount of space.