Gel electrophoresis followed by staining with ethidium bromide is used to separate DNA fragments by size (Fig. 3.1). The gel of gel electrophoresis consists of agarose, a polysaccharide extracted from seaweed that behaves like gelatin.

Gel electrophoresis followed by staining with ethidium bromide is used to separate DNA fragments by size (Fig. 3.1). The gel of gel electrophoresis consists of agarose, a polysaccharide extracted from seaweed that behaves like gelatin. Agarose is a powder that dissolves in water only when heated. After the solution cools, the agarose hardens. For visualizing DNA, agarose is formed into a rectangular slab about 1/4 inch thick. Inserting a comb at one end of the slab before it hardens makes small wells or holes. After the gel solidifies, the comb is removed, leaving small wells at one end. 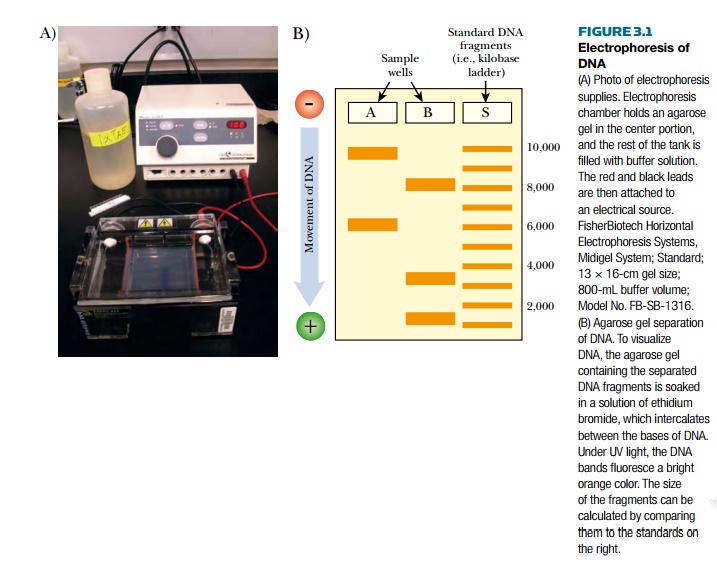 Gel electrophoresis uses electric current to separate DNA molecules by size. The agarose slab is immersed in a buffer-filled tank that has a positive electrode at one end and a negative electrode at the other. DNA samples are loaded into the wells, and when an electrical field is applied, the DNA migrates through the gel. The phosphate backbone of DNA is negatively charged so it moves away from the negative electrode and toward the positive electrode. Polymerized agarose acts as a sieve with small holes between the tangled chains of agarose. The DNA must migrate through these gaps. Agarose separates the DNA by size because larger pieces of DNA are slowed down more by the agarose.

To visualize the DNA, the agarose gel is removed from the tank and immersed into a solution of ethidium bromide. This dye intercalates between the bases of DNA or RNA, although less dye binds to RNA because it is single-stranded. When the gel is exposed to ultraviolet light, it fluoresces bright orange. DNA molecules of the same size usually form a tight band, and the size can be determined by comparing to a set of molecular weight standards run in a different well. Because the standards are of known size, the experimental DNA fragment can be compared directly.

The size of DNA being examined affects what type of gel is used. The standard is agarose, but for very small pieces of DNA, from 50 to 1000 base pairs, polyacrylamide gels are used instead. These gels are able to resolve DNA fragments that vary by only one base pair and are essential to sequencing DNA. For very large DNA fragments (10 kilobases to 10 megabases), agarose is used, but the current is alternated at two different angles. Pulsed field gel electrophoresis (PFGE), as this is called, allows very large pieces of DNA to migrate further than if the current only flows in one direction. Each change in direction loosens large pieces of DNA that are stuck inside agarose pores, letting them migrate further. Finally, gradient gel electrophoresis can be used to resolve fragments that are very close in size. A concentration gradient of acrylamide, buffer, or electrolyte can reduce compression (i.e., crowding of similar sized fragments) due to secondary structure and/or slow the smaller fragments at the lower end of the gel.