The lumbosacral trunk (parts of L4 and L5) and the anterior branches of S1 – S3 join on the anterior surface of the piriform muscle to form the sacral plexus.

The lumbosacral trunk (parts of L4 and L5) and the anterior branches of S1 – S3 join on the anterior surface of the piriform muscle to form the sacral plexus. Direct branches extend from the plexus to the muscles of the pelvic region, namely, to the piriform muscle, the gemellus muscles (F9), the in-ternal obturator muscle, and the quadrate muscle of thigh (F10).

The nerve extends across the upper margin of the piriform muscle in dorsal direction through the suprapiriform foramen to the gluteus medius (E11) and minimus (E12) muscles and supplies both with motor fibers. The nerve continues between the two muscles to the tensor muscle of the fas-cia lata (E13).

Clinical Note: Paralysis of the nerve weakensabduction of the leg. Standing on the affected leg and lifting the healthy leg makes the pelvis of the other side drop (Trendelenburg’s symptom).

The nerve leaves the pelvis through the in-frapiriform foramen and gives off several branches to the gluteus maximus muscle (F14).

Clinical Note: Paralysis of the nerve weakensextension of the hip joint (for example, when standing up or climbing stairs).

The nerve leaves the pelvis together with sciatic nerve and inferior gluteus nerve through the infrapiriform foramen and reaches below the gluteus maximus muscle to the posterior aspect of the thigh. Located directly beneath the fascia lata, it extends along the middle of the thigh into the pop-liteal fossa. This exclusively sensory nerve gives off branches to the lower part of the buttock, the inferior cluneal nerves, and to the perineal region, the perineal branches. It pro-vides sensory innervation to the posterior aspect of the thigh from the lower buttock region into the popliteal fossa and reaches to the proximal aspect of the lower leg. 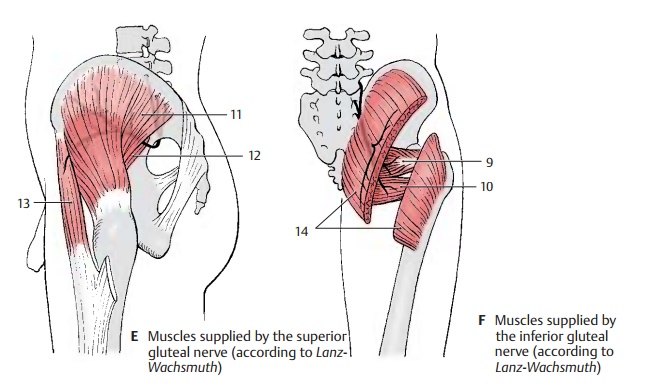 Common peroneal nerve (common fibu-lar nerve) (L4 – S2). In the thigh, the per-oneal part (AC2) of the sciatic nerve gives off a muscular branch to the short head of the biceps muscle of the thigh (A3).

At the lateral margin of the popliteal fossa, the common peroneal nerve gives off two main branches for the skin, the lateral suralcutaneous nerve (A– C6), which supplies theskin at the lateral aspect of the lower leg, and the fibular communicating branch (C7), which joins the medial sural cutaneous nerve to form the sural nerve.

The superficial peroneal nerve gives off muscu-lar branches (AC8) to the long (A9) and short(A10) peroneal muscles. The rest of the nerve is exclusively sensory; it ramifies into terminal branches, the medial dorsal cu-taneous nerve (BC11) and the intermediate dorsal cutaneous nerve(BC12), which supplythe skin of the back of the foot except for the interdigital space between great toe and second toe.

Clinical Note: Injury to the nerve affects theextensor muscles of the foot. The foot can no longer be lifted in the ankle joint. When walking, the foot hangs down and the toes drag along the floor. The leg must be lifted higher than normal, resulting in the so-called steppage gait. 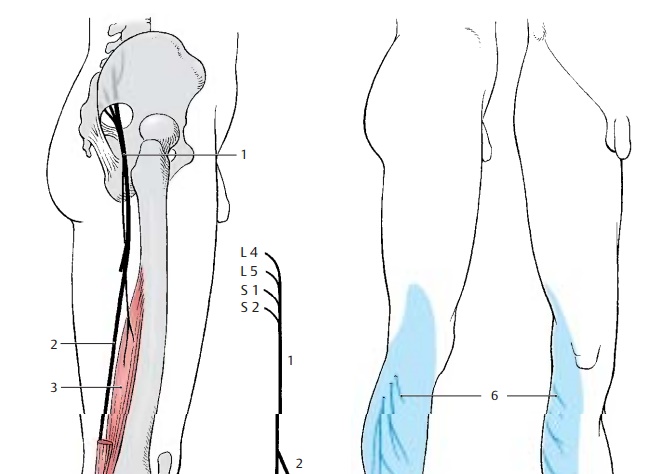 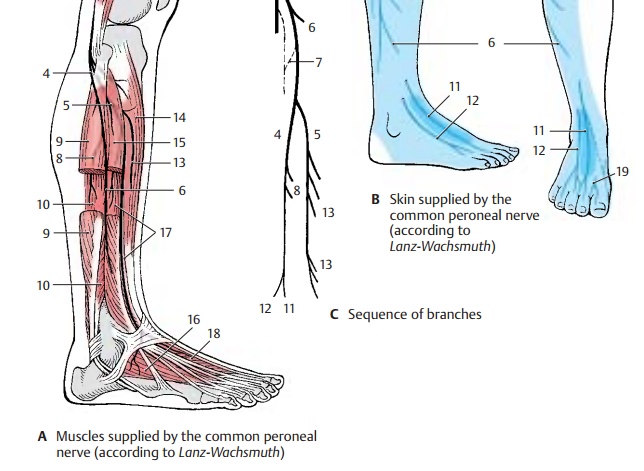 Tibial nerve (L4 – S3). Severalmotorbranches (AC1) originate from the tibial por-tion of the sciatic nerve, namely, those for the proximal and distal parts of the semi-tendinous muscle (A2), for the long head of the biceps muscle (A3), and a branch divid-ing further for the semimembraneous muscle (A4) and the medial part of the great adductor muscle (A5).

After the division of the sciatic nerve, the tibial nerve descends vertically through the middle of the popliteal fossa and under-neath the gastrocnemius muscle. It then lies under the tendinous arch of the soleus muscle and, further distal, between the long flexor muscle of the great toe and the long flexor muscle of toes. It extends between the tendons of both muscles to the back of the medial ankle and winds around it. Below the ankle, it divides into two terminal branches, the medial plantar nerve and the lateral plantar nerve.

Also in the popliteal fossa, motor branches (AC10) go off to the flexor muscles of the lower leg, namely, to the two heads of the gastrocnemius muscle (A11), to the soleus muscle (A12), to the plantar muscle and the popliteal muscle (A13). The popliteal branch gives rise to the interosseous nerve of the leg (C14), which runs along the dorsal surface of the interosseous membrane and provides sensory innervation to the periosteum of the tibia, the upper ankle joint, and the tib-iofibular joint. The tibial nerve gives offmuscular branches (C15) to the posteriortibial muscle (A16), the long flexor muscle of toes (A17), and the long flexor muscle of the great toe (A18). Before the nerve trunk ramifies into terminal branches, it sends off the medial calcaneal branches (B19) to the me-dial skin area of the heel.

The second terminal branch, lateral plantarnerve (CD27), divides into a superficial branch (C28) with the common plantar digitalnerves (C29) and proper plantar digital nerves (BC30) for the skin of the little toearea and into a deep branch (CD31) with the muscular branches for the interosseousmuscles (D32), the adductor muscle of great toe (D33 ) and the three lateral lumbrical muscles. D34, short flexor muscle of the little toe.

Clinical Note: Injury of the tibial nerve leadsto paralysis of the flexor muscles of toes and foot. The foot can no longer be moved in plantar direc-tion: tiptoeing becomes impossible. 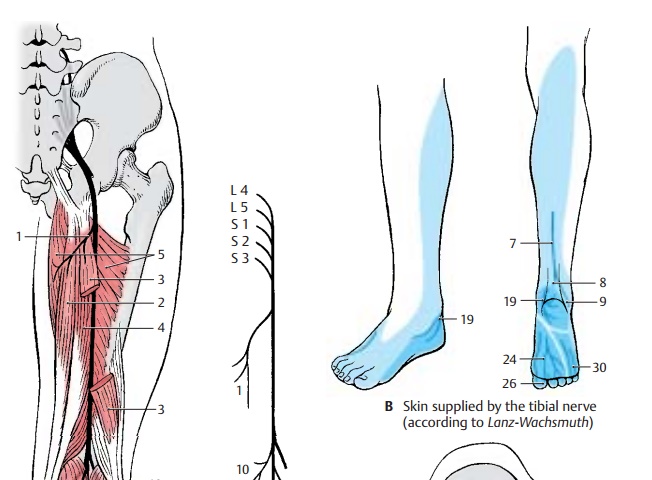 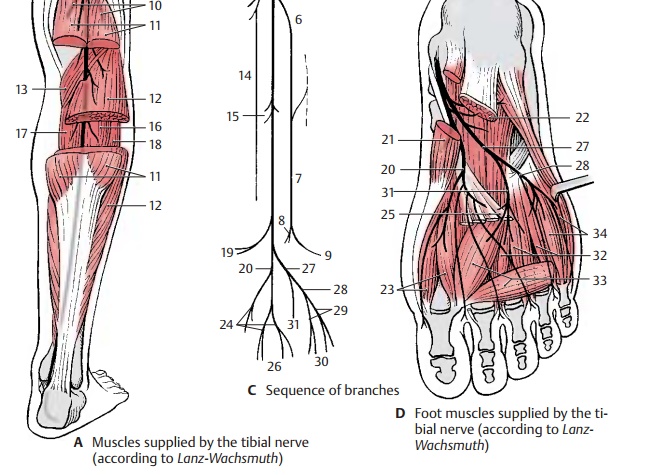 The pudendal nerve (AB1) leaves the pelvis through the infrapiriform foramen (AB2), extends dorsally around the sciatic spine (AB3) and passes through the lesser sciatic foramen (AB4) into the ischioanal fossa. It then runs along the lateral wall of the fossa within the pudendal canal (Alcock’s canal) to below the symphysis, sending its terminal branch to the dorsal side of the penis or cli-toris, respectively.

The perineal nerves (AB7) subdivide into deep and superficial branches. The deep branches participate in the innervation of the external sphincter muscle of the anus. More superficially, they supply the bulbo-cavernous muscle, the ischiocavernous muscle, and the superficial transverse per-ineal muscle. The superficial branches supply sensory fibers to the posterior part of the scrotum (posterior scrotal nerves) (AC8) in males and to the labia majora (posterior labial nerves) (BC9) in females. They also supply the mucosa of the urethra and the bulb of penis in males, and the external urethral opening and the vestibule of vagina in females.

The terminal branch, the dorsal nerve of thepenis (A10) or dorsal nerve of the clitoris (B11),respectively, sends motor branches to the deep transverse perineal muscle, the deep sphincter muscle, and the sphincter muscle of urethra (B12). After passing through the urogenital diaphragm (AB13), it gives off a branch to the cavernous body of the penis in males, and to the cavernous body of the cli-toris in females. In males, the nerve runs along the dorsum of the penis and gives offsensory branches to the skin of the penis and the glans. In females, it supplies sensory fibers to the clitoris including the glans.

The levator ani muscle and the coccygeal muscle are supplied directly by nerve branches from the sacral plexus. 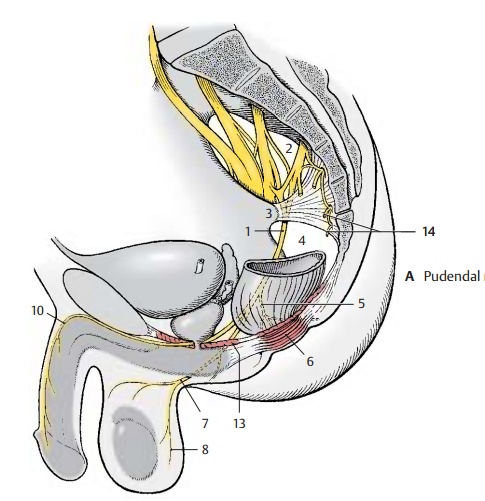 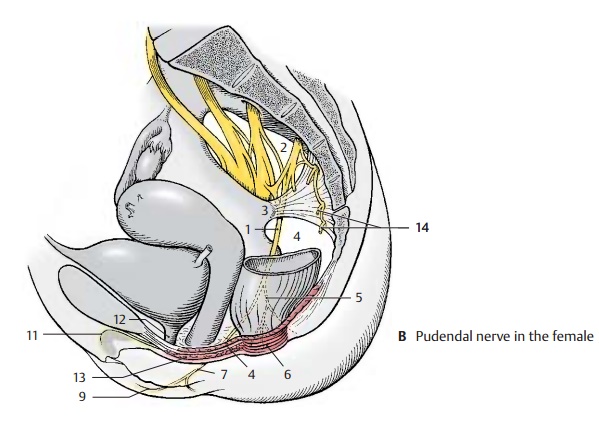 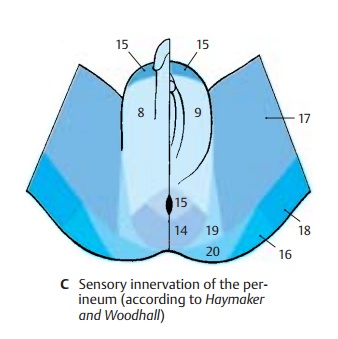 The anterior branches of the fourth and fifth sacral nerves form a fine plexus on the coccygeal muscle, the coccygeal plexus (AB14). Theanococcygeal nerves originate from here; they supply sensory fibers to the skin over the coccyx and between coccyx and anus (C14).