The lumbosacral plexus is formed by the anterior branches of the lumbar and sacralspinal nerves. Its branches provide sensory and motor innervation to the lower limb.

The lumbosacral plexus is formed by the anterior branches of the lumbar and sacralspinal nerves. Its branches provide sensory and motor innervation to the lower limb. The branches of L1 – L3 and part of L4 form the lumbar plexus, the roots of which lie within the psoas muscle. The obturator nerve (A1) and the femoral nerve (A2) originate from here, in addition to several short muscular branches. The remainder of the fourth lumbar nerve and the L5 nerve join to form the lumbosacral trunk (A3), which then unites in the small pelvis with sacral branches 1 – 3 to form the sacral plexus. The sacral branches emerge from the ante-rior sacral foramina of the sacrum and form together with the lumbosacral trunk the sacral plexus; the main nerves originating from here are the sciatic nerve (A4) (commonperoneal nerve [A5] and tibial nerve [A6]). 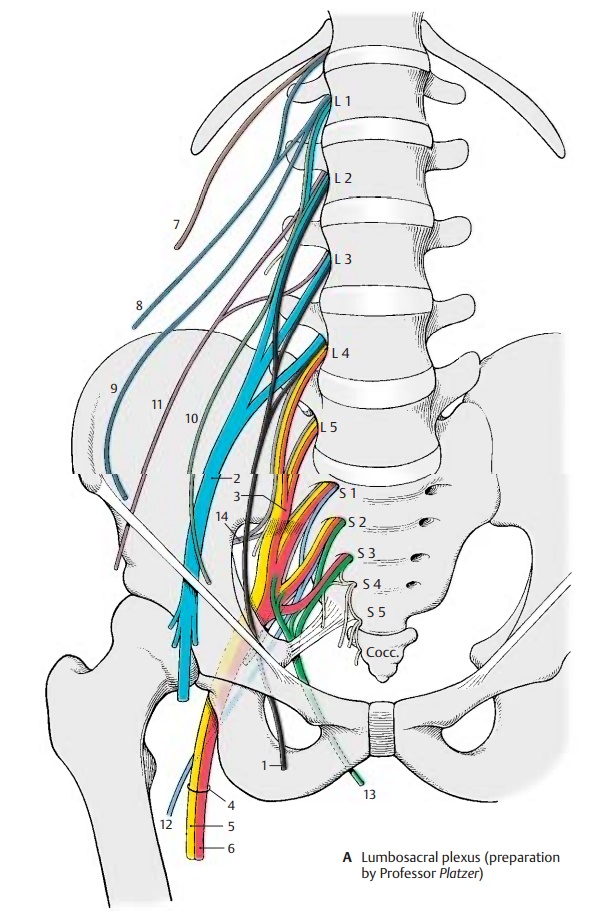 The iliohypogastric nerve (A8) initially runs on the inside of the lumbar quadrate muscle along the dorsal aspect of the kidney and then between the abdominal transverse muscle and the internal oblique muscle of the abdomen. It participates in the innerva-tion of the broad abdominal muscles. It gives off two main branches, namely, the lateral cutaneous branch which supplies the lateral hip region, and the anterior cu-taneous branch which penetrates the aponeurosis of the external oblique muscle of the abdomen cranially to the outer ingui-nal ring and supplies the skin of this region as well as the pubic region.

The ilioinguinal nerve (A9) runs along the in-guinal ligament and inguinal canal with the spermatic cord up to the scrotum, or with the round ligament of the uterus up to the greater lips in the female, respectively. It participates in the innervation of the broad abdominal muscles and supplies sensory fibers to the skin of the mons pubis and the upper part of the scrotum, or labia majora, respectively.

The genitofemoral nerve (A10) divides al-ready in, or on, the psoas muscle into two branches, the genital branch and the femoralbranch. Thegenital branchruns in theabdominal wall along the inguinal ligament through the inguinal canal and reaches the scrotum with the spermatic cord or, in the female, the labia majora with the round ligament of the uterus. It innervates the cremaster muscle and supplies sensory fibers to the skin of the scrotum, or the labia majora, respectively, and the adjacent skin area of the thigh. The femoral branch continues to below the in-guinal ligament and becomes subcutaneous in the saphenous hiatus. It supplies the skin of the thigh lateral to the region of the geni-tal branch.

A11 Lateral cutaneous nerve of femur.

A12 Posterior cutaneous nerve of femur.

The nerve runs over the iliac muscle to below the superior anterior iliac spine. It then extends underneath the inguinal liga-ment through the lateral part of the muscu-lar lacuna to the outer aspect of the thigh and passes through the fascia lata to the skin. The nerve is exclusively sensory and supplies the skin of the lateral aspect of the thigh down to the level of the knee. 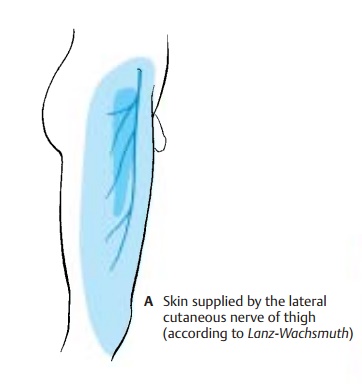 The nerve runs along the margin of the greater psoas muscle up to the inguinal liga-ment and underneath it through the muscu-lar lacuna to the front of the thigh. The nerve trunk divides below the inguinal ligament into several branches, namely, a mostly sensory group, the anterior cutaneousbranches (B – D1), a lateral and medial groupof motor branches for the extensor muscles of the thigh, and the saphenous nerve (B – D2). The saphenous nerve extends to the adductor canal and enters into it. It penetrates the vastoadductor membrane and runs along the medial side of the knee joint and the lower leg together with the great saphenous vein down to the medial ankle.

In the small pelvis, the femoral nerve gives off fine branches (D3) to the greater psoas muscle (B4) and to the iliac muscle (B5). Below the inguinal ligament, a branch (D6) extends to the pectineal muscle (B7). The anterior cutaneous branches (B–D1) origi-nate slightly more distally, with the strongest one continuing along the middle of the thigh down to the knee. They supply sensory fibers to the skin of the anterior and medial aspects of the thigh.

The saphenous nerve (CD2) is exclusively sensory. Below the knee joint, it gives off the infrapatellar branch (B–D15) which sup-plies the skin below the patella. The remain-ing branches, the medial crural cutaneousbranches, supply the skin of the anterior andmedial aspects of the lower leg. The sup-plied area extends on the anterior side over the edge of the tibia and may reach to the great toe along the medial aspect of the foot.

Clinical Note: Injury to the femoral nervemakes it impossible to extend the leg in the knee joint. Flexion in the hip joint is reduced, and the patellar tendon reflex is absent.

Innervation of the skin (A, C).Autonomiczone (dark blue) and maximum zone (light blue). 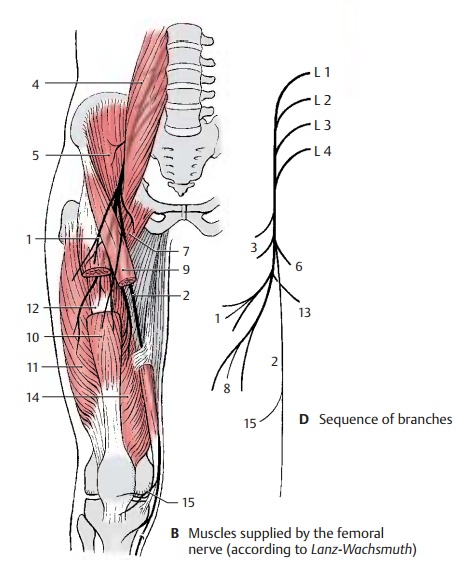 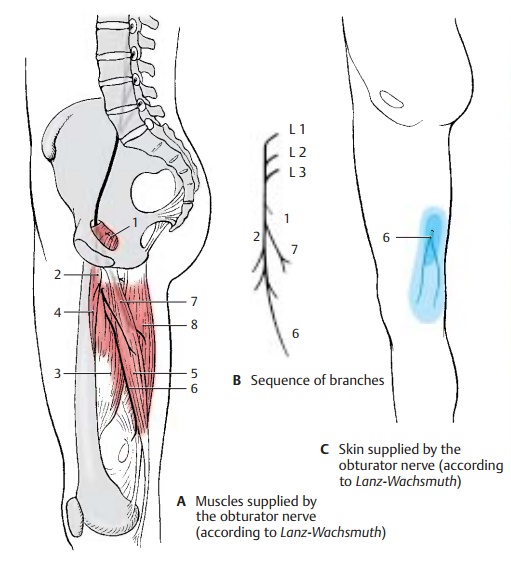 The nerve provides motor innervation to the adductor muscles of the thigh. Medial to thegreater psoas muscle, it extends along the lateral wall of the small pelvis down to the obturator canal through which it passes to reach the thigh. It gives off a muscular branch to the external obturator muscle (AB1) and then divides into a superficial branch and a deep branch. The superficialbranch (AB2) runs between the long adduc-tor muscle (A3) and short adductor muscle (A4) and innervates both. The nerve also gives off branches to the pectineal muscle and the gracilis muscle (A5) and finally ter-minates in a cutaneous branch (A – C6) to the distal region of the medial aspect of the thigh. The deep branch (AB7) runs along the external obturator muscle and then down to the great adductor muscle (A8).

Clinical Note: Paralysis of the obturator nerve(for example, as a result of pelvic fracture) causes loss of adductor muscle function. This restricts standing and walking, and the affected leg can no longer be crossed over the other leg.