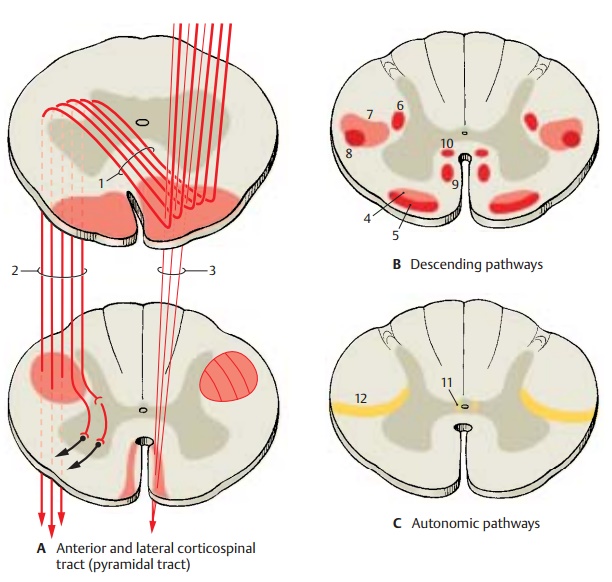 The fibers of the pyramidal pathway origi-nate mostly from the precentral gyrus and the cortex in front of it. Furthermore, some of the fibers are thought to be derived from the cortical regions of the parietal lobe. Eighty percent of all fibers cross in the lower medulla oblongata to the collateral side (pyramidal decussation) (A1) and run as lateralcorticospinal tract (A2) in thelateralfuniculus. The remaining fibers run un-crossed as anterior corticospinal tract (A3) in the anterior funiculus and cross only at the level of their termination. More than half of the pyramidal tract fibers terminate in the cervical spinal cord to supply the upper limb, and one-fourth terminate in the lum-bar spinal cord to supply the lower limb. The lateral funiculus is subdivided somatotopi-cally, with the fibers for the lower limb lying at the periphery and those for the trunk and upper limb lying further inside. Most of the fibers terminate on interneurons that trans-mit impulses for the voluntary motor sys-tem to the anterior horn cells. However, the fibers not only conduct excitation to the anterior horn cells but also mediate cortical inhibition via interneurons. 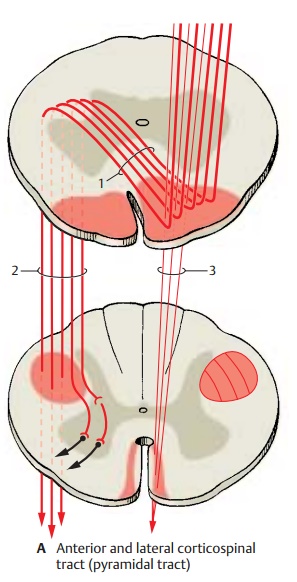 The extrapyramidal tracts comprise de-scending systems from the brain stem that influence the motor system:

· Tegmentospinal tract (B7) from the mid-brain

The rubrospinal tract (B8) (in humans largely replaced by the tegmentospinal tract) and the tectospinal tract (B9) terminate in the cer-vical spinal cord and influence only the differentiated motor system of the head and upper limb. Themedial longitudinal fascicle(B10) contains various fiber systems of thebrain stem. 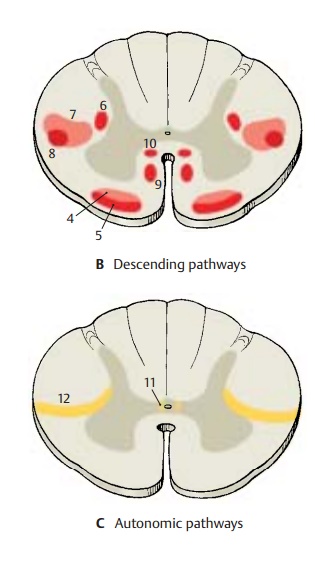 The autonomic pathways consist of poorly myelinated or unmyelinated fibers and rarely form compact bundles. The par-ependymal tract (C11) runs along both sidesof the central canal. Its ascending and de-scending fibers can be traced back up to the diencephalon (hypothalamus) and are thought to transmit impulses for genitalfunction, micturition, and defecation. Ante-rior to the lateral pyramidal tract runs the descending pathway forvasoconstriction and sweating (Foerster) (C12) with a soma-totopic subdivision corresponding to that of the lateral pyramidal tract.