On the ulnar side of the upper arm, the nerve runs down behind the medial inter-muscular septum, being covered by the me-dial head of the triceps muscle. It crosses the elbow joint on the extensor side in a bony groove, the sulcus for the ulnar nerve, at the medial epicondyle of the humerus. Here, the nerve can be palpated, and the pressure causes an electrifying pain radiat-ing into the ulnar side of the hand. The nerve then passes between the two heads of the ulnar flexor muscle of the wrist to the flexor side of the forearm and runs beneath this muscle down to the wrist. It does not pass through the carpal tunnel but extends over the flexor retinaculum to the palm of the hand, where it divides into a superficialbranch and a deep branch.

In the forearm, the nerve gives off branches (C1) to the ulnar flexor muscle of the wrist (A2) and to the ulnar half of the deep flexor muscle of the fingers (A3). A sensory branch, the dorsal branch of the ulnar nerve (BC4), branches off in the middle of the fore-arm and runs to the ulnar side of the back of the hand where it supplies the skin. As for the rest of the back of the hand, its area of innervation overlaps with that of the radial nerve. Another sensory branch, the palmarbranch of the ulnar nerve (BC5), branches offin the distal third of the forearm. It extends to the palm and supplies the skin of the hy-pothenar eminence. 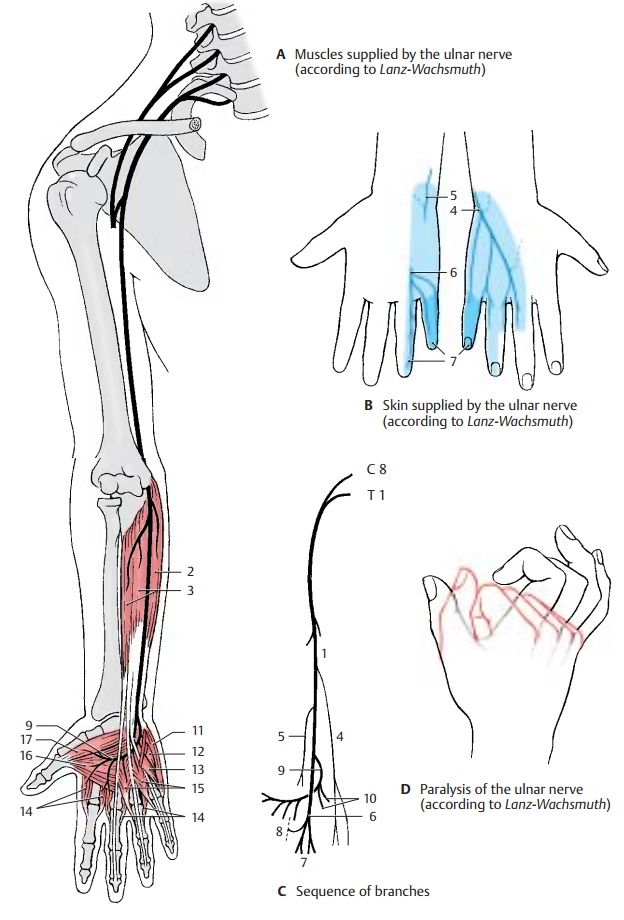 The superficial branch runs as common palmardigital nerve IV (BC6) toward the interdigitalspace between ring finger and little finger and divides into the proper palmar digitalnerves (BC7), which supply sensory fibers tothe volar aspects of the little finger and the ulnar side of the ring finger and reach to the distal phalanges on the extensor side of both fingers. There is a connection to a branch of the median nerve, called the com-municating branch of the median nerve with the ulnar nerve (C8).

Clinical Note: Injury to the ulnar nerve causesthe formation of a so-called clawhand (D), where the fingers are extended in the metacarpo-phalangeal joints but flexed in the proximal and distal interphalangeal joints. This characteristic posture of the fingers is caused by paralysis of the interosseous muscles and lumbrical muscles, which flex the phalanges in the metacarpo-phalangeal joints but extend them in the proxi-mal and distal interphalangeal joints. Failure of the flexor muscles causes the fingers to remain in this posture due to the now predominant exten-sor muscles. Since the little finger and the adduc-tors of the thumb are paralyzed, thumb and little finger can no longer touch each other.

Medial cutaneous nerve of the arm (C8 –T1) (A, B). The nerve approaches the ante-rior surface of the upper arm below the axil-lary fossa. Here it ramifies and supplies the skin of the medial aspect between axilla and elbow joint. It reaches to the flexor side with its anterior branches and to the extensor side of the upper arm with its posterior branches. Frequently, there are anasto-moses to the intercostobrachial nerve. 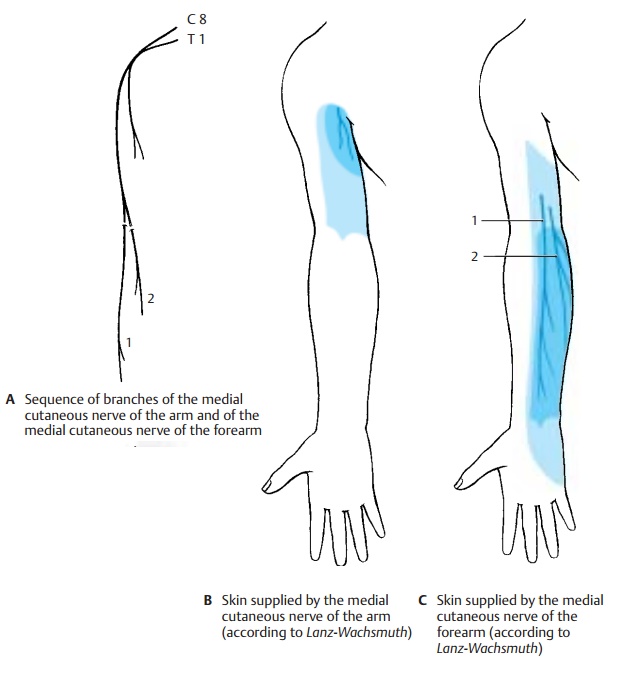 Medial cutaneous nerve of the forearm