The Robots are mostly divided into four major configurations based on their appearances, sizes, etc. such as: 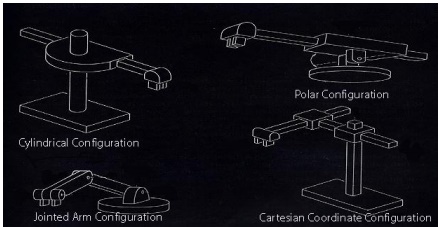 This kind of robots incorporates a slide in the horizontal position and a column in the vertical position. It also includes a robot arm at the end of the slide. Here, the slide is capable of moving in up & down motion with the help of the column. In addition, it can reach the work space in a rotary movement as like a cylinder.

The polar configuration robots will possess an arm, which can move up and down. It comprises of a rotational base along with a pivot. It has one linear & two rotary joints that allows the robot to operate in a spherical work volume. It is also stated as Spherical Coordinate Robots.

The arm in these configuration robots looks almost like a human arm. It gets three rotary joints and three wrist axes, which form into six degrees of freedoms. As a result, it has the capability to be controlled at any adjustments in the work space. These types of robots are used for performing several operations like spray painting, spot welding, arc welding, and more.

These robots are also called as XYZ robots, because it is equipped with three rotary joints for assembling XYZ axes. The robots will process in a rectangular work space by means of this three joints movement. It is capable of carrying high payloads with the help of its rigid structure. It is mainly integrated in some functions like pick and place, material handling, loading and unloading, and so on. Additionally, this configuration adds a name of Gantry Robot.

It is the shape created when a  manipulator reaches forward, backward, up and down.

These distances are determined by the length of a  robot's arm and the design of its axes. Each axis contributes its own range of motion.

A robot can only perform within the confines of this  work envelope. Still, many of the  robots are designed with considerable flexibility. Some have the ability to reach behind themselves. Gantry robots defy traditional constraints of work envelopes. They move along track systems to create large work spaces. 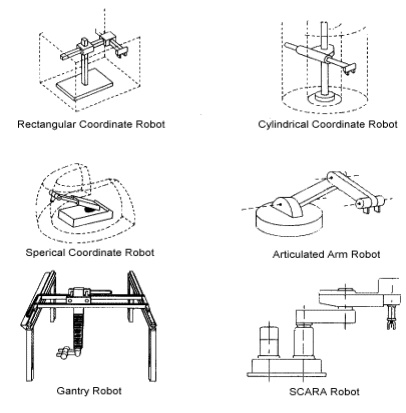 Technical Features of an Industrial Robot