The controller is the "brain" of the industrial robotic arm and allows the parts of the robot to operate together.

The controller is the "brain" of the industrial robotic arm and allows the parts of the robot to operate together. It works as a computer and allows the robot to also be connected to other systems. The  robotic arm controller runs a set of instructions written in code called a program. The program is inputted with  ateach pendant. Many of today's  industrial robot arms use an interface that resembles or is built on the Windows operating system.

Industrial robot arms can vary in size and shape. The industrial  robot arm is the part that positions the end effector. With the  robot arm, the shoulder, elbow, and wrist move and twist to position the end effector in the exact right spot. Each of these joints gives the robot another degree of freedom. A simple robot with three degrees of freedom can move in three ways: up & down, left & right, and forward & backward. Many  industrial robots in factories today are six axis robots.

The end effector connects to the robot's arm and functions as a hand. This part comes in direct contact with the material the robot is manipulating. Some variations of an effector are a gripper, a vacuum pump, magnets, and  welding torches. Some robots are capable of changing end effectors and can be programmed for different sets of tasks.

The drive is the engine or motor that moves the links into their designated positions. The links are the sections between the joints.  Industrial robot arms generally use one of the following types of drives: hydraulic, electric, or pneumatic. Hydraulic drive systems give a robot great speed and strength. An electric system provides a robot with less speed and strength. Pneumatic drive systems are used for smaller robots that have fewer axes of movement. Drives should be periodically inspected for wear and replaced if necessary.

Sensors allow the industrial robotic arm to receive feedback about its environment. Theycan give the robot a limited sense of sight and sound. The sensor collects information and sends it electronically to the robot controlled. One use of these sensors is to keep two robots that work closely together from bumping into each other. Sensors can also assist  end effectors by adjusting for part variances. Vision sensors allow a  pick and place robot to differentiate between items to choose and items to ignore.

Every robot is connected to a computer, which keeps the pieces of the arm working together. This computer is known as the controller.

The controller functions as the "brain"of the robot. The controller also allows the robot to be networked to other systems, so that it may work together with other machines, processes, or robots.

Robots today have controllers that are run by programs - sets of instructions written in code. Almost all robots of today are entirely pre-programmed by people; they can do only what they are programmed to do at the time, and nothing else. In the future, controllers with artificial intelligence, or AI could allow robots to think on their own, even program themselves. This could make robots more self-reliant and independent. 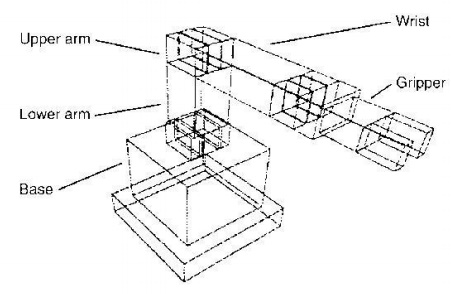 Robot arms come in all shapes and sizes. The arm is the part of the robot that positions the end- effector and sensors to do their pre-programmed business. Many (but not all) resemble human arms, and have shoulders, elbows, wrists, even fingers.

This gives the robot a lot of ways to position itself in its environment. Each joint is said to give the robot 1 degree of freedom. So, a simple robot arm with 3 degrees of freedom could move in 3 ways: up and down, left and right, forward and backward.

The drive is the "engine" that drives the links (the sections between the joints into their desired position. Without a drive, a robot would just sit there, which is not often helpful. Most drives are powered by air, water pressure, or electricity.

The end-effector is the "hand" connected to the robot's arm. It is often different from a human hand - it could be a tool such as a gripper, a vacuum pump, tweezers, scalpel, blowtorch - just about anything that helps it do its job. Some robots can change end-effectors, and be reprogrammed for a different set of tasks.

Most robots of today are nearly deaf and blind. Sensors can provide some limited feedback to the robot so it can do its job.

Compared to the senses and abilities of even the simplest living things, robots have a very long way to go.

The sensor sends information, in the form of electronic signals back to the controller. Sensors also give the robot controller information about its surroundings and let it know the exact position of the arm, or the state of the world around it.