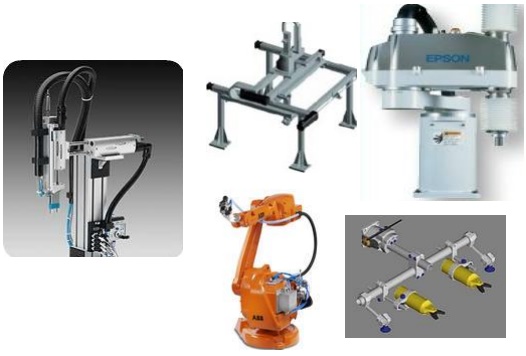 Degree of Freedom (D.O.F) - Each joint on the robot introduces a degree of freedom.

Work Volume/Workspace - The robot tends to have a fixed and limited geometry. The work envelope is the boundary of positions in space that the robot can reach. For a Cartesian robot (like an overhead crane) the workspace might be a square, for more sophisticated robots the workspace   might   be   a ntersshapecthating   looksbubbles’li 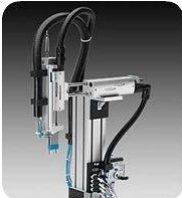 The pick and place machine is the simplest of the robots. Pneumatic powered, it has no servo motors driving the axes, but an air cylinder instead.

As such, each stoke is to an end stop, that is generally adjustable for a few millimeters, via a micrometer type screw.

A popular application is to pick and place small components into an assembly, maybe from a vibratory bowl feeder to an assembly fixture.

Scara means Selective, Compliant, Robot arm.This robot is especially designed for assembly automation and uses 4-axes of motion, each axes driven by a servo motor. The two joints have a motor each and the base has a rotate axis. 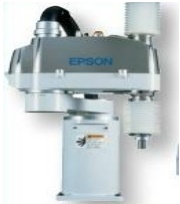 The forth axis is the vertical axis that generally inserts a component. This arrangement makes a very "stiff" arrangement that is ideally suited for accurate insertion. The Scara is the least expensive of the servo powered robots and are usually small and can be very fast. The photo at left is of an Epson robot. Take a look at this page for more details- The Scara Robots.

This type of robot is generally mounted direct to the shop floor and usually has a large work envelope. 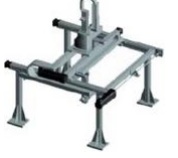 It can be used for material handling applications and I used them for stacking and de-stacking steel blanks, that were laser welded into tailored blanks.

They can be pneumatic powered but the cost of servo drives for industrial robotics is getting so competitive that today the air powered types are few and far between.

More details can be found by visiting this page- The Gantry Robot.

These machines are usually mounted on a table and are similar in concept to the gantry robot but on a smaller scale. The axes can be air or servo motor powered and are generally offered in modules, that are complete and can be bolted together, to form the motions required. 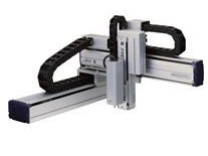 The photo shows a Toshiba robot.

Maybe  the  most  recognized   industrial robot. It is available in a wide range of sizes and payloads, They can be small enough to mount on a table or, like the ABB IR 140 shown here are floor mounted.

Applications are universal in the field of industrial robotics. The robot arm can be found in all types of uses, from assembly to welding to painting and material handling.

When used in a painting application, the robot does not need a large payload capability but does need good repeatability and accurate path following.When correctly programmed and well maintained, a paint robot will produce excellent repeatable results with no paint runs or overspray.

The photo shows an ABB IRB 52.

The welding robot does not require a large payload capability but a larger work envelope can be an advantage and smooth, non-jerky movement is required. Welding is a dirty operation, so sealing of critical areas is essential and the shielding gas used in MIG operations must ensure that weld spatter is kept tp a minimum.

A most important detail in industrial robotics is the part/ robot interface.Grippers come in many sizes and different types. The photo shows an SMC gripper that is available in various bore sizes and is toggle operated. The toggle has the effect of increasing the clamping force and can provide gripping when pneumatic power is absent. 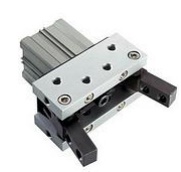 The E.O.A.T. ( End Of Arm Tooling), in industrial robotics, is an essential component of the whole. Custom designed tooling can be very complicated. The fact that modular components are available reduces the technical risk and cost of many applications.