Chapter: Genetics and Molecular Biology: Repression and the lac Operon

Repression and the lac Operon

The initial studies on the lac system, like those on most other bacterial systems, were genetic.

Background of the lac Operon

The initial studies on the lac system, like those on most other bacterial systems, were genetic. At the Pasteur Institute in Paris during World War II, Monod began a study of the process of adaptation of E. coli to growth on medium containing lactose. This first led to studies on the origin of the enzymes that were induced in response to the addition of lactose to the medium and then to studies on how the induction process was regulated. Research on the lac operon at the Pasteur Institute flourished and spread around the world, and for many years was the most active research area in molecular biology.

By now, the essential regulatory properties of the lactose system have been characterized as a result of extensive physiological, genetic, and biochemical analyses. By no means, however, do we fully understand what happens to regulate transcription even in this simple system. Current research on the lactose system includes study of what proteins participate, which other proteins they interact with, and what they do. It also includes the more fundamental questions of how RNA polym-erase recognizes promoters and initiates transcription and how proteins fold during their synthesis, recognize their substrates, and bind to other proteins or to specific sequences on DNA.

The lactose system consists of four genes that enable E. coli to grow on lactose as a source of carbon and energy (Fig. 11.1). The regulatory protein of the system is the product of the lacI gene. It is a repressor, and when it is bound to the DNA it prevents transcription of the lacZ, lacY, and lacA genes. The product of the lacZ gene is the enzymeβ-galactosidase which cleaves lactose to yield glucose and galactose. ThelacY product transports lactose into the cell, and the lacA productacetylates some toxic galactosides to detoxify them. The three genes, lacZ, lacY, and lacA constitute an operon by the strict definition of theword since a single promoter serves more than one gene. We will also use the word “operon” to refer to a transcriptional unit plus its related regulatory sequences even if it contains a single gene.

Figure 11.2 Schematic drawing of thelacoperon in a repressed state and inan induced state in the presence of cAMP. 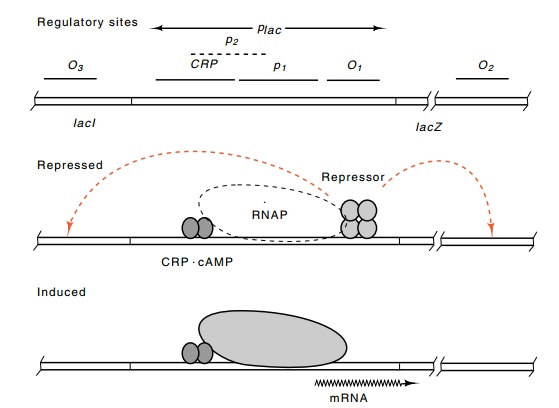 Figure 11.2 shows the picture that has been derived for the mecha-nism of regulation of the lac operon in E. coli. The lacI product binds to a specific site in the promoter region, termed the operator or O1 site. While bound to this operator, and in conjunction with the two other operators located nearby, O2 and O3, it prevents RNA polymerase from binding to or moving from the p1 promoter. The operators O2 and O3 are often called pseudo-operators, and they increase repressor binding at O1 through loop formation in which repressor simultaneously binds to O1 and either O2 or O3. Partially overlapping the p1 promoter is a second promoter, p2. When repressor is not bound to the operators, then RNA polymerase has access to the two partially overlapping promoters p1and p2. Little transcription results from polymerase binding to p2because its isomerization rate is low. Normally, p2 plays no significant role in the system because CRP protein at its binding site blocks access of polymerase to p2. CRP also directly stimulates transcription from p1 promoter.

After lactose is added to a growing culture, the synthesis rate of the lac enzymes ultimately is increased about a thousandfold. Curiously,the induction requires activity of the very enzyme that is being induced, β-galactosidase. The low uninduced, or basal, level of β-galactosidasehydrolyzes some of the lactose that leaks into the cells or that enters via the basal levels of lacY protein. In a side reaction the enzyme also generates allolactose from lactose. The binding of allolactose to re-pressor reduces repressor’s affinity for operator by about a thousand-fold. As a result, repressor tends to dissociate from operator and transcription can begin. Shortly, the induced levels of β-galactosidase and lactose transporter lead to higher intracellular levels of lactose and allolactose and repression is further reduced.

The efficient initiation of transcription by RNA polymerase at the promoter of the lac operon requires not only the absence of bound lac repressor but also the presence of cyclic AMP and cyclic AMP receptor protein, which is called CAP or CRP protein. This auxiliary induction requirement is thought to result from the fact that the carbon and energy requirements of E. coli are most efficiently met by catabolizing glucose rather than other sugars. Consequently, cells have evolved a way to shut down the possibly inefficient use of other carbon utilization pathways if glucose is present. This phenomenon is known as the glucose effect or catabolite repression. The glucose effect is generated in two ways: by excluding inducers of some operons from the cell and by reducing the inducibility of some operons. When glucose is present and is being metabolized, the concentrations of cAMP are low, and few CRP proteins contain bound cAMP. Only when CRP has bound cAMP, which occurs when glucose is absent, can the protein specifically bind to DNA and assist RNA polymerase to initiate transcription of the CRP-dependent operons such as lac.