Khorana laid the groundwork for chemical synthesis of DNA.

Khorana laid the groundwork for chemical synthesis of DNA. He devel-oped techniques to form the phosphodiester bond between nucleotides

Figure 10.23 Outline of one method for the chemical synthesis of DNA. Notethat elongation proceeds from the 3’ to the 5’ end in this method. 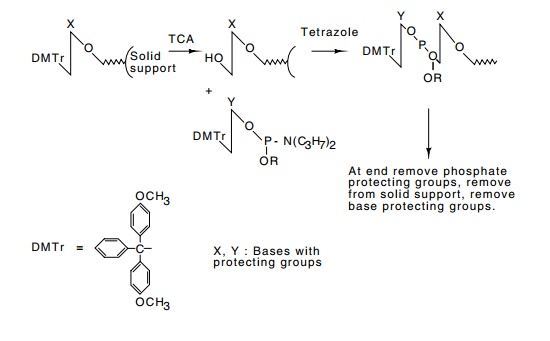 while at the same time preventing the reactive amino, hydroxyl, and other phosphorus groups from reacting. With these techniques, he and his co-workers then synthesized a complete tRNA gene. Originally many person-years were required for the synthesis of 80 nucleotide oligomers. Now, as a result of continued development by many research groups, oligonucleotide synthesis has been highly automated and as many as 100 nucleotides may be joined in specific sequence in a day.

Before 1965, no researchers would have had a good idea of what to do with the sequence of an entire chromosome if it were presented to them. We are hardly in that situation now. Similarly, before 1975 there seemed to be little reason to try to synthesize DNA chemically. Not only were relatively few interesting sequences known, but the fraction of the synthesized material that would possess the desired sequence was likely to be too small to be of use. With the development of cloning since 1975 and the overall increase in our knowledge of biological mechanisms, the picture dramatically changed. Now it is routine to synthesize a gene denovo. Convenient restriction sites can be placed through the gene and when necessary, portions of the gene can be altered by synthesis of just the region between two restriction enzyme cleavage sites.

Figure 10.24 Mutagenesis with chemically synthesized DNA. The oligomerhybridizes, except for the mispaired base. Extension of the primer with DNA Pol I and ligation yields heteroduplex molecules that can be transformed. Following DNA replication in the transformants, the two types of DNA mole-cules segregate to yield wild-type or mutant homoduplexes. Retransformation yields colonies containing entirely mutant or wild-type DNA, which can be identified by hybridization with radioactive mutant oligomer. 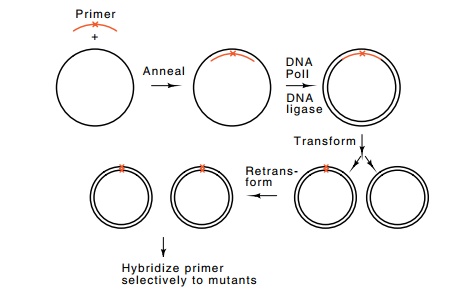 Another method for mutating a gene is to direct mutations to a specific point. This can be done with chemically synthesized oligonu-cleotides in a process called oligonucleotide directed mutagenesis. An oligonucleotide containing the desired alteration, a mutation, insertion, or deletion, will hybridize to complementary, wild-type single-stranded DNA and can serve as a primer for DNA pol I (Fig. 10.24). The resulting double-stranded DNA contains one wild-type strand and one mutant strand. Upon replication in cells, one of the daughter duplexes is wild-type and the other is mutant. Sometimes it is necessary to prevent heteroduplex repair of the mutant strand. Either way, following trans - formation and segregation, a mutant gene can be obtained.