Understanding the biochemical mechanisms underlying the regulation of gene expression is a central problem in biochemistry-biology.

Understanding the biochemical mechanisms underlying the regulation of gene expression is a central problem in biochemistry-biology. One of the first steps in the study of a protein that binds to DNA is to determine where it binds. The use of DNAse footprinting in conjunction with Southern transfers to determine the locations of histone binding was briefly described. Galas and Schmitz developed the elegant method of footprinting to solve the problem of determining the location 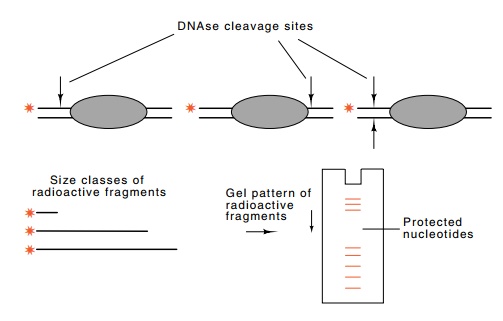 Figure 10.16 DNAse footprinting. Light digestion by DNAse I nicks each of thelabeled DNA molecules on average one time. No nicking occurs on any of the molecules under the bound protein and therefore no fragments will be pro-duced with ends in this region.

at which a protein binds to DNA. As described earlier, their method is based on the principles behind DNA sequencing. Although it was de-vised for mapping DNAse-sensitive sites, it can be used with any reagent that cleaves the DNA or modifies it so that later the DNA can be cleaved. The basic idea can also be used in two modes, a protection mode in which the bound protein protects the DNA from the reagent, and a prebinding interference mode in which the DNA is modified first and then the positions of modification which prevent protein binding are determined.

In the simplest form of footprinting the DNA fragment to be investi-gated must first be labeled on just one end of one strand. This can be done with polynucleotide kinase, with terminal transferase, which adds nucleotides to the 3’-OH end of DNA, with DNA pol I, which fills out sticky ends left by many restriction enzymes, or with PCR by amplifying a region containing the binding site and the use of one radioactively-la-beled oligonucleotide primer.

After the binding of a protein to the DNA, the complex is briefly treated with DNAse. The duration of this treatment is adjusted so that about one random strand scission occurs per DNA molecule. Conse-quently, the population of molecules will contain examples of phos-phodiester bond breakage at all positions except those covered by the protein (Fig. 10.16). Then the DNA is denatured and subjected to electrophoresis on a sequencing gel. This separates the population of molecules according to size, and the amount of DNA in any band is proportional to the amount of cleavage that occurred at the corresponding position in the DNA. No cleavages occur in the positions protected by the presence of the bound protein. 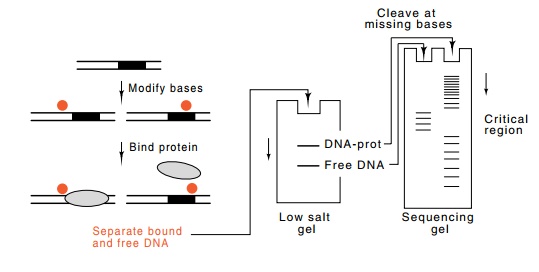 Figure 10.17 Premodification to locate contacted bases or phosphates. Theintensity of the bands ultimately produced is proportional to the numbers of DNA molecules that were modified at that position. By binding protein to the population of DNA molecules, the subset modified in regions essential for protein binding are separated from the subset modified in irrelevant positions.

The footprinting experiments can also be performed with the protein protecting the DNA binding site from chemical attack rather than enzymatic attack. Dimethylsulfate can methylate guanine residues ex-cept some of those protected by the protein. After the methylation, the DNA can be cleaved at each of the methylated guanines, and the denatured, labeled fragments can be subjected to electrophoresis on a sequencing gel. Both DNAse I and dimethylsulfate are imperfect in that their reaction with unprotected DNA is somewhat base-specific. Conse-quently, both of these techniques must be performed with the control of labeled DNA free of the binding protein. The differences in the intensities of the bands between the DNA and protein plus DNA samples then identify the phosphodiester bonds protected from cleavage by the protein. The hydroxyl radical will attack and cleave the phosphodiester backbone independent of sequence. Thus, it is particularly useful for footprinting experiments.

The premodification interference mode for performing footprinting types of experiments is to modify or nick the DNA before addition of the protein whose binding site is to be mapped (Fig. 10.17). Then the protein is added. Those DNA molecules still capable of binding the protein are separated from the DNA molecules that have been modified in regions essential for binding of the protein, and as a result, do not bind the protein. These two populations of DNA molecules are separated from one another by the mobility retardation assay, in which DNA with a bound protein migrates more slowly than DNA without a bound protein. If necessary, the two populations are cleaved at the positions of modified bases and the fragments are separated on DNA sequencing gels as described before.

Figure 10.18 Changing a base-contacting amino acid to an alanine can makethe protein insensitive to the identity of that base.

The basic ideas of footprinting and premodification probing can even be adapted to reveal specific amino acid residue-DNA base interactions in the binding of a protein to DNA. The approach is similar to the premodification method just described. The labeled DNA is treated chemically so that each molecule, on average, has one base removed from a random position. This can be either a hydroxyl radical treatment or one of the base-specific reactions used in Maxam-Gilbert DNA sequencing. Then the entire population of molecules is permitted to bind to the protein. There is no effect on the binding if a base is missing from a position not contacted by the protein. If, however, a base is missing from a position the protein contacts, the protein will bind less tightly. Thus, if the protein and treated DNA are mixed and then diluted so that no further binding can occur, the protein will dissociate first, if it ever binds at all, from those DNA molecules that are missing bases that are contacted by the protein. The population of free DNA molecules becomes enriched with such DNA molecules. Similarly, the population of DNA molecules with bound protein becomes enriched with molecules that are missing only those bases not involved with contacts to the protein. The two DNA populations can be separated from one another with the DNA band shift assay. If necessary, the molecules are chemi-cally cleaved at the positions of missing bases, and the positions of the cleavages are displayed after electrophoresis on DNA sequencing gels.

To demonstrate a specific residue-base interaction, the residue is modified by site-specific mutagenesis or PCR to an alanine. Because alanine is smaller than most other amino acids, most likely it will be unable to make the contact made by the amino acid it replaced (Fig. 10.18). Thus, in performing the missing contact experiment, a new base will be in the collection of bases not contacted. This is the base contacted by the amino acid at the position of the new alanine. Of course, in the execution of the experiment, allowance must be made for the fact that dissociation of the protein from the DNA is faster because of the missing contact. Either a shorter time is allowed for dissociation or buffer conditions are altered to increase the affinity of binding.

Figure 10.19 Generation of antisense RNA by inverting a gene or a segmentof a gene and its subsequent hybridization in vivo to the mRNA from the gene, thereby preventing its translation.