We now consider the most fundamental issues in molecular genetics.

In E.coli, nearly 260 genes are grouped into 75 different operons.

Structure of the operon: Each operon is a unit of gene expression and regulation and consists of one or more structural genes and an adjacent operator  gene  that  controls  transcriptional activity of the structural gene.

i)   The structural gene codes for proteins, rRNA and tRNA required by the cell.

ii)  Promoters are the signal sequences in DNA that initiate RNA synthesis. RNA polymerase binds to the promoter prior to the initiation of transcription.

iii) The operators are present between the promoters and structural genes. The repressor protein binds to the operator region of the operon.

The lac operon consists of one regulator gene (‘i’ gene refers to inhibitor)  promoter sites (p), and operator site (o). Besides these,  it  has  three structural genes namely lac z,y and lac a. The lac ‘z’ gene codes for β-galactosidase,  lac  ‘y’  gene codes for permease and ‘a’ gene codes for transacetylase.

Jacob  and Monod proposed the classical model of Lac operon to explain gene expression and regulation in E.coli. In lac operon, a polycistronic structural gene is regulated by a common promoter and regulatory gene. When the cell is using its normal energy source as glucose, the ‘i’ gene transcribes a repressor mRNA and after its translation, a repressor protein is produced. It binds to the operator region of the operon and prevents translation, as a result, β-galactosidase is not produced. In the absence of preferred carbon source such as glucose, if lactose is available as an energy source for the bacteria then lactose enters the cell as a result of permease enzyme. Lactose acts as an inducer and interacts with the repressor to inactivate it. 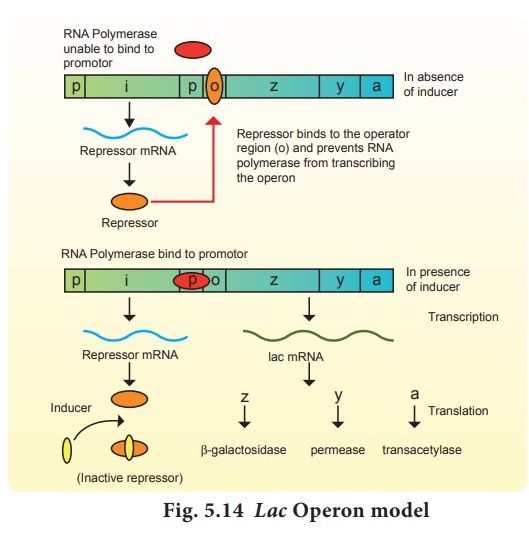 The repressor protein binds to the operator of the operon and prevents RNA polymerase from transcribing the operon. In the presence of inducer, such as lactose or allolactose, the repressor is inactivated by interaction with the inducer. This allows RNA polymerase to bind to the promotor site and transcribe the operon to produce lac mRNA which enables formation of all the required enzymes needed for lactose metabolism  (Fig. 5.14).  This  regulation  of lac operon by the repressor is an example of negative control of transcription initiation. Lac operon is also under the control of positive regulation as well.