Replication of DNA takes place during the S phase of cell cycle. 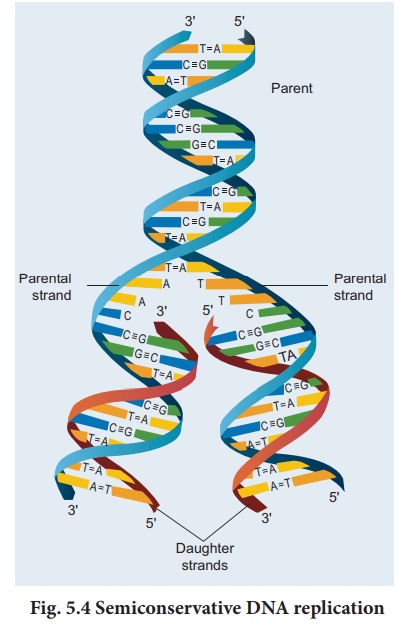 Semi-conservative replication was proposed by Watson and Crick in 1953. This mechanism of replication is based on the DNA model. They suggested that the two polynucleotide strands of DNA molecule unwind and start separating at one end. During this process, covalent hydrogen bonds are broken. The separated single strand then acts as template for the synthesis of a new strand. Subsequently, each daughter double helix carries one polynucleotide strand from the parent molecule that acts as a template and the other strand is newly synthesised and complementary to the parent strand (Fig. 5.4).

At the end of growth, they observed that the bacterial DNA in the heavy culture contained only 15N and in the light culture only 14N. The heavy DNA could be distinguished from light DNA (15N from 14N) with a technique called Cesium Chloride (CsCl) density gradient centrifugation. In this process, heavy and light DNA extracted from cells in the two cultures settled into two distinct and separate bands (hybrid DNA) (Fig. 5.5).

The heavy culture (15N) was then transferred into a medium that had only NH 4Cl, and took samples at various definite time intervals (20 minutes duration). After the first replication, they extracted DNA and subjected it to density gradient centrifugation. The DNA settled into a band that was intermediate in position between the previously determined heavy and light bands. After the second replication (40 minutes duration), they again extracted DNA samples, and this time found the DNA settling into two bands, one at the light band position and one at intermediate position. These results confirm Watson and Crick’s semi conservative replication hypothesis.

2. Enzymes and mechanism of replication

Replication begins at the initiation site called the site of ‘ origin of replication’ (ori). In prokaryotes, there is only one origin of replication, whereas in eukaryotes with giant DNA molecules, there can be several origins of replication (replicons). Since the two strands of DNA cannot be separated throughout at a time (due to large requirement of energy) the replication occurs within a small opening of the DNA helix called as replication fork. Unwinding of the DNA strand is carried out by DNA helicase. Thus, in one strand (template strand with polarity 3'→5') the replication is continuous and is known as the leading strand while in the other strand (coding strand with polarity 5'→3') replication is discontinuous, known as the lagging strand (Fig. 5.6). The discontinuously synthesized fragments of the lagging strand (called the Okazaki fragments) are joined by the enzyme DNA ligase. 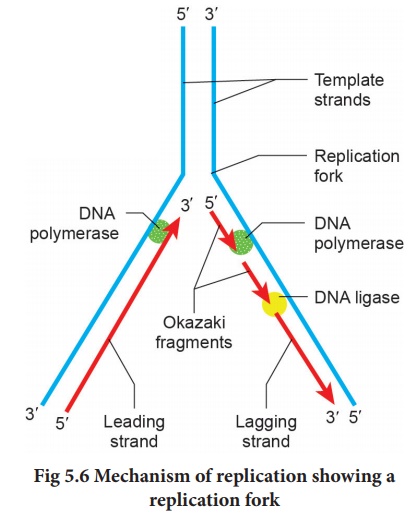 As they move away in both directions, newly synthesized complementary nucleotides are paired with the existing nucleotides on the parent strand and covalently bonded together by DNA polymerase . Formation of new strand requires a primer (a short stretch of RNA)for initiation. The primer produces a 3'-OH end on the sequence of ribonucleotides, to which deoxy ribonucleotides are added. The RNA primer is ultimately removed leaving a gap in the newly synthesized DNA strand. It is removed from 5' end one by one by the exonuclease activity of DNA polymerase. Finally, when all the nucleotides are in position, gaps are sealed by the enzyme DNA ligase.

At the point of origin of repliction, the helicases and topoisomerases (DNA gyrase) unwind and pull apart the strands, forming a Y-Shaped structure called the replication fork. There are two replication forks at each origin. The two strands of a DNA helix have an antiparallel  orientation. The enzyme DNA polymerase can only catalyse the addition of a nucleotide to the new strands in the 5'→3' direction, as it can only add nucleotides to the 3' carbon position.