Proton pump inhibitors (PPIs) are now among the most widely prescribed drugs worldwide due to their outstanding efficacy and safety.

Since their introduction in the late 1980s, these efficacious acid inhibitory agents have assumed the major role for the treatment of acid-peptic disorders. Proton pump inhibitors (PPIs) are now among the most widely prescribed drugs worldwide due to their outstanding efficacy and safety. 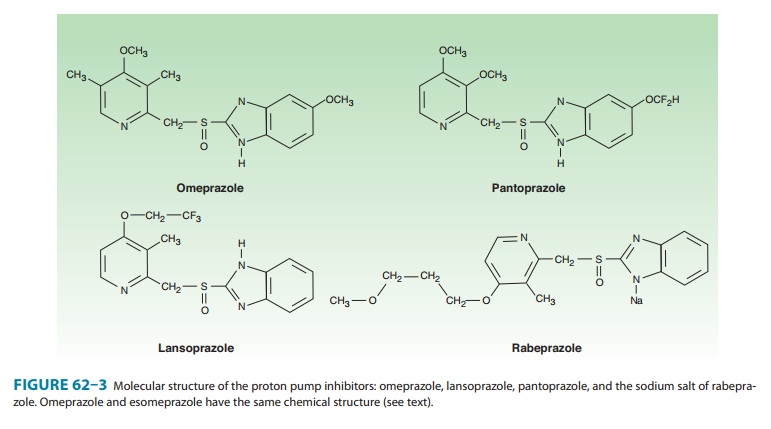 Proton pump inhibitors are administered as inactive prodrugs. To protect the acid-labile prodrug from rapid destruction within the gastric lumen, oral products are formulated for delayed release as acid-resistant, enteric-coated capsules or tablets. After passing through the stomach into the alkaline intestinal lumen, the enteric coatings dissolve and the prodrug is absorbed.

For children or patients with dysphagia or enteral feeding tubes, capsule formula-tions (but not tablets) may be opened and the microgranules mixed with apple or orange juice or mixed with soft foods (eg, applesauce). Lansoprazole is also available as a tablet formulation that disintegrates in the mouth, or it may be mixed with water and administered via oral syringe or enteral tube. Omeprazole is also available as a powder formulation (capsule or packet) that contains sodium bicarbonate (1100–1680 mg NaHCO3; 304–460 mg of sodium) to protect the naked (non-enteric-coated) drug from acid degradation. When administered on an empty stomach by mouth or enteral tube, this “immediate-release” suspension results in rapid omeprazole absorption (Tmax< 30 minutes) and onset of acid inhibition.

The proton pump inhibitors are lipophilic weak bases (pKa 4–5) and after intestinal absorption diffuse readily across lipid membranes into acidified compartments (eg, the parietal cell canaliculus). The prodrug rapidly becomes protonated within the canaliculus and is concentrated more than 1000-fold by Henderson-Hasselbalch trapping . There, it rapidly undergoes a molecular conversion to the active form, a reactive thiophilic sulfenamide cation, which forms a covalent disulfide bond with the H+/K+-ATPase, irreversibly inactivating the enzyme.

The pharmacokinetics of available proton pump inhibitors are shown in Table 62–2. Immediate-release omeprazole has a faster onset of acid inhibition than other oral formulations. Although differences in pharmacokinetic profiles may affect speed of onset and duration of acid inhibition in the first few days of therapy, they are of little clinical importance with continued daily admin-istration. The bioavailability of all agents is decreased approxi-mately 50% by food; hence, the drugs should be administered on an empty stomach.

In a fasting state, only 10% of proton pumps are actively secreting acid and susceptible to inhibition. Proton pump inhibitors should be administered approximately 1 hour before a meal (usually breakfast), so that the peak serum concen-tration coincides with the maximal activity of proton pump secre-tion. The drugs have a short serum half-life of about 1.5 hours, but acid inhibition lasts up to 24 hours owing to the irreversible inactivation of the proton pump. At least 18 hours are required for synthesis of new H+/K+-ATPase pump molecules. Because not all proton pumps are inactivated with the first dose of medication, up to 3–4 days of daily medication are required before the full acid-inhibiting potential is reached. Similarly, after stopping the drug, it takes 3–4 days for full acid secretion to return.

Proton pump inhibitors undergo rapid first-pass and systemic hepatic metabolism and have negligible renal clearance. Dose reduction is not needed for patients with renal insufficiency or mild to moderate liver disease but should be considered in patients with severe liver impairment. Although other proton pumps exist in the body, the H+/K+-ATPase appears to exist only in the parietal cell and is distinct structurally and functionally from other H+-transporting enzymes.

The intravenous formulations of esomeprazole and pantopra-zole have characteristics similar to those of the oral drugs. When given to a fasting patient, they inactivate acid pumps that are actively secreting, but they have no effect on pumps in quiescent, nonsecreting vesicles. Because the half-life of a single injection of the intravenous formulation is short, acid secretion returns several hours later as pumps move from the tubulovesicles to the canali-cular surface. Thus, to provide maximal inhibition during the first 24–48 hours of treatment, the intravenous formulations must be given as a continuous infusion or as repeated bolus injections. The optimal dosing of intravenous proton pump inhibitors to achieve maximal blockade in fasting patients is not yet established.

From a pharmacokinetic perspective, proton pump inhibitors are ideal drugs: they have a short serum half-life, they are concen-trated and activated near their site of action, and they have a long duration of action. 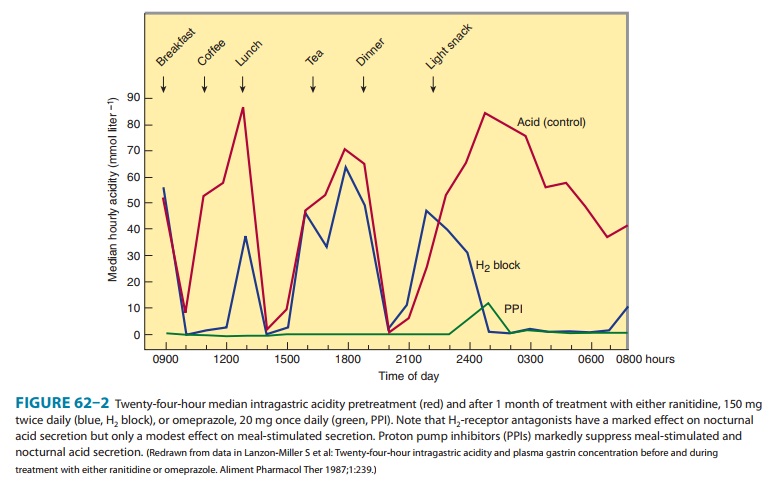 In current clinical practice, many patients with symptomatic GERD are treated empirically with medications without prior endoscopy, ie, without knowledge of whether the patient has ero-sive or nonerosive reflux disease. Empiric treatment with proton pump inhibitors provides sustained symptomatic relief in 70–80% of patients, compared with 50–60% with H2 antagonists. Because of recent cost reductions, proton pump inhibitors are being used increasingly as first-line therapy for patients with symptomatic GERD.

Asymptomatic peptic ulceration develops in 10–20% of people taking frequent NSAIDs, and ulcer-related complications (bleed-ing, perforation) develop in 1–2% of persons per year. Proton pump inhibitors taken once daily are effective in reducing the incidence of ulcers and ulcer complications in patients taking aspirin or other NSAIDs.

3. Prevention of rebleeding from peptic ulcers—In patientswith acute gastrointestinal bleeding due to peptic ulcers, the risk of rebleeding from ulcers that have a visible vessel or adherent clot is increased. Rebleeding of this subset of high-risk ulcers is reduced significantly with proton pump inhibitors administered for 3–5 days either as high-dose oral therapy (eg, omeprazole, 40 mg orally twice daily) or as a continuous intravenous infusion. It is believed that an intragastric pH higher than 6 may enhance coagulation and platelet aggregation. The optimal dose of intravenous proton pump inhibitor needed to achieve and maintain this level of near-complete acid inhibition is unknown; however, initial bolus administration of esomeprazole or pantoprazole (80 mg) followed by constant infusion (8 mg/h) is commonly recommended.

Proton pump inhibitors have modest efficacy for treatment of non-ulcer dyspepsia, benefiting 10–20% more patients than placebo. Despite their use for this indication, superiority to H2 antagonists (or even placebo) has not been conclusively demonstrated.

As discussed previously (see H2-Receptor Antagonists) proton pump inhibitors (given orally, by nasogastric tube, or by intrave-nous infusions) may be administered to reduce the risk of clini-cally significant stress-related mucosal bleeding in critically ill patients. The only proton pump inhibitor approved by the Food and Drug Administration (FDA) for this indication is an oral immediate-release omeprazole formulation, which is administered by nasogastric tube twice daily on the first day, then once daily. For patients with nasoenteric tubes, immediate-release omeprazole may be preferred to intravenous H2 antagonists or other proton pump inhibitors because of comparable efficacy, lower cost, and ease of administration.

E. Gastrinoma and Other Hypersecretory Conditions

Patients with isolated gastrinomas are best treated with surgical resection. In patients with metastatic or unresectable gastrinomas, massive acid hypersecretion results in peptic ulceration, erosive esophagitis, and malabsorption. Previously, these patients required vagotomy and extraordinarily high doses of H2 antagonists, which still resulted in suboptimal acid suppression. With proton pump inhibitors, excellent acid suppression can be achieved in all patients. Dosage is titrated to reduce basal acid output to less than 5–10 mEq/h. Typical doses of omeprazole are 60–120 mg/d.

Proton pump inhibitors are extremely safe. Diarrhea, headache, and abdominal pain are reported in 1–5% of patients, although the frequency of these events is only slightly increased compared with placebo. Increasing cases of acute interstitial nephritis have been reported. Proton pump inhibitors do not have teratogenicity in animal models; however, safety during pregnancy has not been established.

Acid is important in releasing vitamin B12 from food. A minor reduction in oral cyanocobalamin absorption occurs during pro-ton pump inhibition, potentially leading to subnormal B12 levels with prolonged therapy. Acid also promotes absorption of food-bound minerals (non-heme iron, insoluble calcium salts, magne-sium). Several case-control studies have suggested a modest increase in the risk of hip fracture in patients taking proton pump inhibitors over a long term compared with matched controls. Although a causal relationship is unproven, proton pump inhibi-tors may reduce calcium absorption or inhibit osteoclast function. Pending further studies, patients who require long-term proton pump inhibitors—especially those with risk factors for osteoporo-sis—should have monitoring of bone density and should be pro-vided calcium supplements. Cases of severe, life-threatening hypomagnesemia with secondary hypocalcemia due to proton pump inhibitors have been reported; however, the mechanism of action is unknown.

Gastric acid is an important barrier to colonization and infection of the stomach and intestine from ingested bacteria. Increases in gastric bacterial concentrations are detected in patients taking proton pump inhibitors, which is of unknown clinical signifi-cance. Some studies have reported an increased risk of both com-munity-acquired respiratory infections and nosocomial pneumonia among patients taking proton pump inhibitors.

There is a 2- to 3-fold increased risk for hospital- and community-acquired Clostridium difficile infection in patients taking proton pump inhibitors. There also is a small increased risk of other enteric infections (eg, Salmonella, Shigella, E coli, Campylobacter), which should be considered particularly when traveling in under-developed countries.

Gastrin levels are regulated by intragastric acidity. Acid suppres-sion alters normal feedback inhibition so that median serum gas-trin levels rise 1.5- to 2-fold in patients taking proton pump inhibitors. Although gastrin levels remain within normal limits in most patients, they exceed 500 pg/mL (normal, < 100 pg/mL) in 3%. Upon stopping the drug, the levels normalize within 4 weeks. The rise in serum gastrin levels may stimulate hyperplasia of ECL and parietal cells, which may cause transient rebound acid hyper-secretion with increased dyspepsia or heartburn after drug discon-tinuation, which abate within 2–4 weeks after gastrin and acid secretion normalize. In female rats given proton pump inhibitors for prolonged periods, hypergastrinemia caused gastric carcinoid tumors that developed in areas of ECL hyperplasia. Although humans who take proton pump inhibitors for a long time also may exhibit ECL hyperplasia, carcinoid tumor formation has not been documented. At present, routine monitoring of serum gas-trin levels is not recommended in patients receiving prolonged proton pump inhibitor therapy.

E. Other Potential Problems Due to Decreased Gastric Acidity

Among patients infected with H pylori, long-term acid suppres-sion leads to increased chronic inflammation in the gastric body and decreased inflammation in the antrum. Concerns have been raised that increased gastric inflammation may accelerate gastric gland atrophy (atrophic gastritis) and intestinal metaplasia— known risk factors for gastric adenocarcinoma. A special FDA Gastrointestinal Advisory Committee concluded that there is no evidence that prolonged proton pump inhibitor therapy produces the kind of atrophic gastritis (multifocal atrophic gastritis) or intestinal metaplasia that is associated with increased risk of ade-nocarcinoma. Routine testing for H pylori is not recommended in patients who require long-term proton pump inhibitor therapy. Long-term proton pump inhibitor therapy is associated with the development of small benign gastric fundic-gland polyps in a small number of patients, which may disappear after stopping the drug and are of uncertain clinical significance.

Decreased gastric acidity may alter absorption of drugs for which intragastric acidity affects drug bioavailability, eg, ketoconazole, itraconazole, digoxin, and atazanavir. All proton pump inhibitors are metabolized by hepatic P450 cytochromes, including CYP2C19 and CYP3A4. Because of the short half-lives of proton pump inhibitors, clinically significant drug interactions are rare. Omeprazole may inhibit the metabolism of warfarin, diazepam, and phenytoin. Esomeprazole also may decrease metabolism ofdiazepam. Lansoprazole may enhance clearance of theophyl-line. Rabeprazole and pantoprazole have no significant drug interactions.