Drugs Used in the Treatment of Irritable Bowel Syndrome

IBS is an idiopathic chronic, relapsing disorder characterized by abdominal discomfort (pain, bloating, distention, or cramps) in association with alterations in bowel habits (diarrhea, constipa-tion, or both).

DRUGS USED IN THE TREATMENT OF IRRITABLE BOWEL SYNDROME

IBS is an idiopathic chronic, relapsing disorder characterized by abdominal discomfort (pain, bloating, distention, or cramps) in association with alterations in bowel habits (diarrhea, constipa-tion, or both). With episodes of abdominal pain or discomfort, patients note a change in the frequency or consistency of their bowel movements.

Pharmacologic therapies for IBS are directed at relieving abdominal pain and discomfort and improving bowel function.

For chronic abdominal pain, low doses of tricyclic antidepres-sants (eg, amitriptyline or desipramine, 10–50 mg/d) appear to be helpful . At these doses, these agents have no effect on mood but may alter central processing of visceral afferent information. The anticholinergic properties of these agents also may have effects on gastrointestinal motility and secretion, reduc-ing stool frequency and liquidity. Finally, tricyclic antidepressants may alter receptors for enteric neurotransmitters such as sero-tonin, affecting visceral afferent sensation.

Several other agents are available that are specifically intended for the treatment of IBS.

Some agents are promoted as providing relief of abdominal pain or discomfort through antispasmodic actions. However, small or large bowel spasm has not been found to be an important cause of symptoms in patients with IBS. Antispasmodics work primarily through anticholinergic activities. Commonly used medications in this class include dicyclomine and hyoscyamine . These drugs inhibit muscarinic cholinergic receptors in the enteric plexus and on smooth muscle. The efficacy of antispasmodics for relief of abdominal symptoms has never been convincingly dem-onstrated. At low doses, they have minimal autonomic effects. However, at higher doses they exhibit significant additional anti-cholinergic effects, including dry mouth, visual disturbances, uri-nary retention, and constipation. For these reasons, antispasmodics are infrequently used. 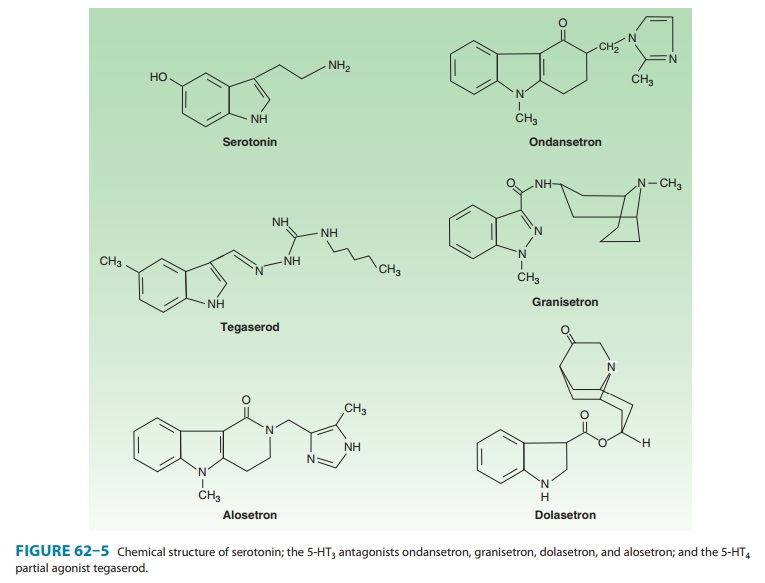 Alosetron is a 5-HT3antagonist that has been approved for thetreatment of patients with severe IBS with diarrhea (Figure 62–5). Four other 5-HT3 antagonists (ondansetron, granisetron, dolase-tron, and palonosetron) have been approved for the preventionand treatment of nausea and vomiting (see Antiemetics); however, their efficacy in the treatment of IBS has not been determined. The differences between these 5-HT3 antagonists that determine their pharmacodynamic effects have not been well studied.

Alosetron is a highly potent and selective antagonist of the 5-HT3 receptor. It is rapidly absorbed from the gastrointestinal tract with a bioavailability of 50–60% and has a plasma half-life of 1.5 hours but a much longer duration of effect. It undergoes extensive hepatic cytochrome P450 metabolism with renal excretion of most metabolites. Alosetron binds with higher affinity and disso-ciates more slowly from 5-HT3 receptors than other 5-HT3 antagonists, which may account for its long duration of action.

Alosetron is approved for the treatment of women with severe IBS in whom diarrhea is the predominant symptom (“diarrhea-predominant IBS”). Its efficacy in men has not been established. In a dosage of 1 mg once or twice daily, it reduces IBS-related lower abdominal pain, cramps, urgency, and diarrhea. Approximately 50–60% of patients report adequate relief of pain and discomfort with alosetron compared with 30–40% of patients treated with placebo. It also leads to a reduction in the mean number of bowel movements per day and improvement in stool consistency. Alosetron has not been evaluated for the treatment of other causes of diarrhea.

In contrast to the excellent safety profile of other 5-HT3-receptor antagonists, alosetron is associated with rare but serious gastroin-testinal toxicity. Constipation occurs in up to 30% of patients with diarrhea-predominant IBS, requiring discontinuation of the drug in 10%. Serious complications of constipation requiring hospitalization or surgery have occurred in 1 of every 1000 patients. Episodes of ischemic colitis—some fatal—have been reported in up to 3 per 1000 patients. Given the seriousness of these adverse events, alosetron is restricted to women with severe diarrhea-predominant IBS who have not responded to conventional thera-pies and who have been educated about the relative risks and benefits.

Despite being metabolized by a number of CYP enzymes, alose-tron does not appear to have clinically significant interactions with other drugs.

The pharmacology of tegaserod was discussed previously under Laxatives. This agent was approved for the short-term treatment of women with IBS who had predominant constipation. Controlled studies demonstrated a modest improvement (approximately 15%) in patient global satisfaction and a reduction in severity of pain and bloating in patients treated with tegaserod, 6 mg twice daily, com-pared with placebo. Owing to an increased number of cardiovascu-lar deaths observed in post-marketing studies in patients taking tegaserod, it was voluntarily removed from the market.

As discussed previously, lubiprostone is a prostanoic acid deriva-tive that stimulates the type 2 chloride channel (ClC-2) in the small intestine and is used in the treatment of chronic constipa-tion. Lubiprostone recently was approved for the treatment of women with IBS with predominant constipation. Its efficacy for men with IBS is unproven. The approved dose for IBS is 8 mcg twice daily (compared with 24 mcg twice daily for chronic consti-pation). Lubiprostone has not been compared with other less expensive laxatives (eg, milk of magnesia). Lubiprostone is listed as category C for pregnancy and should be avoided in women of child-bearing age.