Drugs that can selectively stimulate gut motor function (prokinetic agents) have significant potential clinical usefulness. Agents that increase lower esophageal sphincter pressures may be useful for GERD. Drugs that improve gastric emptying may be helpful for gastroparesis and postsurgical gastric emptying delay. Agents that stimulate the small intestine may be beneficial for postoperative ileus or chronic intestinal pseudo-obstruction. Finally, agents that enhance colonic transit may be useful in the treatment of consti-pation. Unfortunately, only a limited number of agents in this group are available for clinical use at this time.

PHYSIOLOGY OF THE ENTERIC NERVOUS SYSTEM

The enteric nervous system  is composed of interconnected networks of ganglion cells and nerve fibers mainly located in the submucosa (submucosal plexus) and between the circular and longitudinal muscle layers (myenteric plexus). These networks give rise to nerve fibers that connect with the mucosa and muscle. Although extrinsic sympathetic and parasympathetic nerves project onto the submucosal and myenteric plexuses, the entericnervous system can independently regulate gastrointestinal motility and secretion. Extrinsic primary afferent neurons project via the dorsal root ganglia or vagus nerve to the central nervous system (Figure 62–4). Release of serotonin (5-HT) from intestinal mucosa enterochromaffin (EC) cells stimulates 5-HT3 receptors on the extrinsic afferent nerves, stimulating nausea, vomiting, or abdomi-nal pain. Serotonin also stimulates submucosal 5-HT1P receptors of the intrinsic primary afferent nerves (IPANs), which contain calci-tonin gene-related peptide (CGRP) and acetylcholine and project to myenteric plexus interneurons. 5-HT4 receptors on the presynaptic terminals of the IPANs appear to enhance release of CGRP or ace-tylcholine. The myenteric interneurons are important in controlling the peristaltic reflex, promoting release of excitatory mediators proximally and inhibitory mediators distally. Motilin may stimulate excitatory neurons or muscle cells directly. Dopamine acts as an inhibitory neurotransmitter in the gastrointestinal tract, decreasing the intensity of esophageal and gastric contractions. 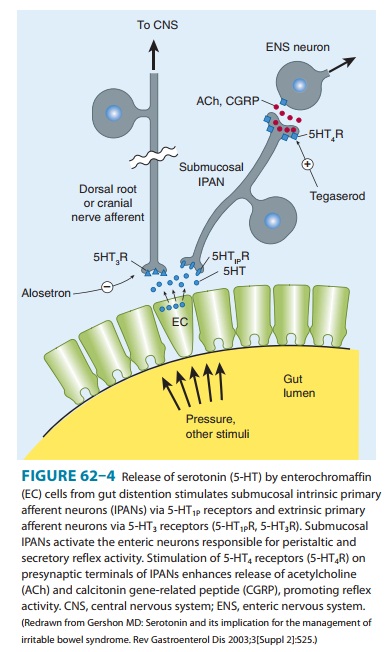 Although there are at least 14 serotonin receptor subtypes, 5-HT drug development for gastrointestinal applications to date has focused on 5-HT3-receptor antagonists and 5-HT4-receptoragonists. These agents—which have effects on gastrointestinalmotility and visceral afferent sensation—are discussed under Drugs Used for the Treatment of Irritable Bowel Syndrome and Antiemetic Agents.

Cholinomimetic agonists such as bethanechol stimulate muscarinic M3 receptors on muscle cells and at myenteric plexus synapses . Bethanechol was used in the past for the treatment of GERD and gastroparesis. Owing to multiple cholinergic effects and the advent of less toxic agents, it is now seldom used. The acetylcholinesterase inhibitor neostigmine can enhance gastric, small intestine, and colonic emptying. Intravenous neostigmine has enjoyed a resurgence in clinical usage for the treatment of hos-pitalized patients with acute large bowel distention (known as acute colonic pseudo-obstruction or Ogilvie’s syndrome). Administration of 2 mg results in prompt colonic evacuation of flatus and feces in the majority of patients. Cholinergic effects include excessive sali-vation, nausea, vomiting, diarrhea, and bradycardia.

Metoclopramide and domperidone are dopamine D2-receptor antagonists. Within the gastrointestinal tract activation of dop-amine receptors inhibits cholinergic smooth muscle stimulation; blockade of this effect is believed to be the primary prokinetic mechanism of action of these agents. These agents increase esoph-ageal peristaltic amplitude, increase lower esophageal sphincter pressure, and enhance gastric emptying but have no effect on small intestine or colonic motility. Metoclopramide and domperi-done also block dopamine D2 receptors in the chemoreceptor trigger zone of the medulla (area postrema), resulting in potent antinausea and antiemetic action.

Metoclopramide is available for clinical use in the USA; domperi-done is available in many other countries. These agents are some-times used in the treatment of symptomatic GERD but are not effective in patients with erosive esophagitis. Because of the supe-rior efficacy and safety of antisecretory agents in the treatment of heartburn, prokinetic agents are used mainly in combination with antisecretory agents in patients with regurgitation or refractory heartburn.

These agents are widely used in the treatment of patients with delayed gastric emptying due to postsurgical disorders (vagotomy, antrectomy)and diabetic gastroparesis. Metoclopramide is sometimes adminis-tered in hospitalized patients to promote advancement of nasoenteric feeding tubes from the stomach into the duodenum.

These agents lead to symptomatic improvement in a small num-ber of patients with chronic dyspepsia.

Because of their potent antiemetic action, metoclopramide and domperidone are used for the prevention and treatment of emesis.

The most common adverse effects of metoclopramide involve the central nervous system. Restlessness, drowsiness, insomnia, anxiety, and agitation occur in 10–20% of patients, especially the elderly. Extrapyramidal effects (dystonias, akathisia, parkinsonian features) due to central dopamine receptor blockade occur acutely in 25% of patients given high doses and in 5% of patients receiving long-term therapy. Tardive dyskinesia, sometimes irreversible, has devel-oped in patients treated for a prolonged period with metoclopramide. For this reason, long-term use should be avoided unless absolutely necessary, especially in the elderly. Elevated prolactin levels (caused by both metoclopramide and domperidone) can cause galactor-rhea, gynecomastia, impotence, and menstrual disorders.

Domperidone is extremely well tolerated. Because it does not cross the blood-brain barrier to a significant degree, neuropsychi-atric and extrapyramidal effects are rare.

Macrolide antibiotics such as erythromycin directly stimulate motilin receptors on gastrointestinal smooth muscle and promote the onset of a migrating motor complex. Intravenous erythromycin (3 mg/kg) is beneficial in some patients with gastroparesis; how-ever, tolerance rapidly develops. It may be used in patients with acute upper gastrointestinal hemorrhage to promote gastric emp-tying of blood before endoscopy.