Three monoclonal antibodies to human TNF are approved for the treatment of inflammatory bowel disease: infliximab, adali-mumab, and certolizumab (Table 62ā€“3). Infliximab and adali-mumab are antibodies of the IgG1 subclass. Certolizumab is a recombinant antibody that contains an Fab fragment that is conju-gated to polyethylene glycol (PEG) but lacks an Fc portion. The Fab portions of infliximab and certolizumab are chimeric mouse-human antibodies but adalimumab is fully humanized. Infliximab 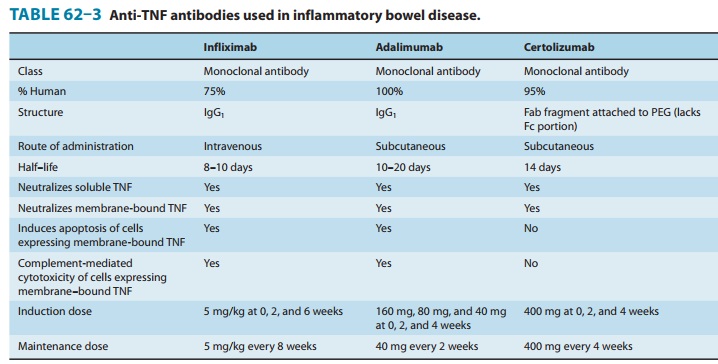 All three agents bind to soluble and membrane-bound TNF with high affinity, preventing the cytokine from binding to its receptors. Binding of all three antibodies to membrane-bound TNF also causes reverse signaling that suppresses cytokine release. When infliximab or adalimumab bind to membrane-bound TNF, the Fc portion of the human IgG1 region promotes antibody-mediated apoptosis, complement activation, and cellular cytotox-icity of activated T lymphocytes and macrophages. Certolizumab, without an Fc portion, lacks these properties.

All three agents are approved for the acute and chronic treatment of patients with moderate to severe Crohnā€™s disease who have had an inadequate response to conventional therapies. Infliximab also is approved for the acute and chronic treatment of moderate to severe ulcerative colitis. With induction therapy, all three agents lead to symptomatic improvement in 60% and disease remission in 30% of patients with moderate to severe Crohnā€™s disease, including patients who have been dependent on glucocorticoids or who have not responded to 6-MP or methotrexate. The median time to clinical response is 2 weeks. Induction therapy is generally given as follows: infliximab 5 mg/kg intravenous infusion at 0, 2, and 6 weeks; adalimumab 160 mg (in divided doses) initially and 80 mg subcutaneous injection at 2 weeks; and certolizumab 400 mg subcutaneous injection at 0, 2, and 4 weeks. Patients whorespond may be treated with chronic maintenance therapy, as fol-lows: infliximab 5 mg/kg intravenous infusion every 8 weeks; adalimumab 40 mg subcutaneous injection every 2 weeks; certoli-zumab 400 mg subcutaneous injection every 4 weeks. With chronic, regularly scheduled therapy, clinical response is main-tained in more than 60% of patients and disease remission in 40%. However, one-third of patients eventually lose response despite higher doses or more frequent injections. Loss of response in many patients may be due to the development of antibodies to the TNF antibody or to other mechanisms.

Serious adverse events occur in up to 6% of patients with anti-TNF therapy. The most important adverse effect of these drugs is infection due to suppression of the TH1 inflammatory response. This may lead to serious infections such as bacterial sepsis, tuber-culosis, invasive fungal organisms, reactivation of hepatitis B, listeriosis, and other opportunistic infections. Reactivation of latent tuberculosis, with dissemination, has occurred. Before administering anti-TNF therapy, all patients must undergo testing with tuberculin skin tests or interferon gamma release assays. Prophylactic therapy for tuberculosis is warranted for patients with positive test results before beginning anti-TNF therapy.More common but usually less serious infections include upper respiratory infections (sinusitis, bronchitis, and pneumonia) and cellulitis. The risk of serious infections is increased markedly in patients taking concomitant corticosteroids.

Antibodies to the antibody (ATA) may develop with all three agents. These antibodies may attenuate or eliminate the clinical response and increase the likelihood of developing acute or delayed infusion or injection reactions. Antibody formation is much more likely in patients given episodic anti-TNF therapy than regular scheduled injections. In patients on chronic mainte-nance therapy, the prevalence of ATA with infliximab is 10%, certolizumab 8%, and adalimumab 3%. Antibody development also is less likely in patients who receive concomitant therapy with immunomodulators (ie, 6-MP or methotrexate). Concomitant treatment with anti-TNF agents and immunomodulators may increase the risk of lymphoma.

Infliximab intravenous infusions result in acute adverse infusion reactions in up to 10% of patients, but discontinuation of the infu-sion for severe reactions is required in less than 2%. Infusion reac-tions are more common with the second or subsequent infusions than with the first. Early mild reactions include fever, headache, dizziness, urticaria, or mild cardiopulmonary symptoms that include chest pain, dyspnea, or hemodynamic instability. Reactions to subsequent infusions may be reduced with prophylactic admin-istration of acetaminophen, diphenhydramine, or corticosteroids. Severe acute reactions include significant hypotension, shortness of breath, muscle spasms, and chest discomfort; such reactions may require treatment with oxygen, epinephrine, and corticosteroids.

A delayed serum sickness-like reaction may occur 1ā€“2 weeks after anti-TNF therapy in 1% of patients. These reactions consist of myalgia, arthralgia, jaw tightness, fever, rash, urticaria, and edema and usually require discontinuation of that agent. Positive antinuclear antibodies and anti-double-stranded DNA develop in a small number of patients. Development of a lupus-like syn-drome is rare and resolves after discontinuation of the drug.

Lymphoma appears to be increased in patients with untreated inflammatory bowel disease. Anti-TNF agents may further increase the risk of lymphoma in this population, although the relative risk is uncertain. An increased number of cases of hepato-splenic T-cell lymphoma, a rare but usually fatal disease, have been noted in children and young adults, virtually all of whom have been on combined therapy with immunomodulators, anti-TNF agents, or corticosteroids.