Protein tagging systems are tools for the isolation and purification of single target proteins from a mixture. The target protein is genetically fused to a segment of DNA that codes for a “tag,” creating a hybrid gene.

Protein tagging systems are tools for the isolation and purification of single target proteins from a mixture. The target protein is genetically fused to a segment of DNA that codes for a “tag,” creating a hybrid gene. This is inserted into a vector with the appropriate promoters and terminators to express the tagged protein of interest. The gene construct is transformed into a suitable host organism for expression. When the cells are grown and disrupted to release the proteins, the target protein can be easily isolated because of its tag.

Many different types of tags are used to isolate proteins because the chemistry and size of the tag may affect the protein of interest in a negative way. The first widely used tag, called the polyhistidine or His6 tag, consists of six histidine residues in a row (Fig. 9.15). Histidine binds very tightly to nickel ions; therefore, His-tagged proteins are purified on a column to which Ni2+ ions are attached. Once attached to the column, the His6-tagged protein is removed by disrupting the Ni2+–His interaction with free histidine or imidazole. The polyhistidine tag may be attached to the carboxy- or amino-terminal end of the protein of interest. Because the His6 tag is very short, the target protein is rarely affected by adding it.

Other short tags for proteins include FLAG, which is recognized by a specific antibody. FLAG has the peptide sequence AspTyrLysAspAspAspAspLys. As before, the gene for the target protein plus a short DNA segment encoding FLAG is cloned into a vector, and the hybrid protein is produced in either bacteria or a cell line. FLAG-tagged proteins can be isolated from a cell lysate using the anti-FLAG antibody either bound to beads or attached to a column. Only the tagged protein attaches to the beads/column. Finally, the FLAG-tagged protein is separated from the antibody by adding free FLAG peptide. The short peptide is present in surplus and competes for antibody with the tagged protein, which is therefore eluted from the beads or column. 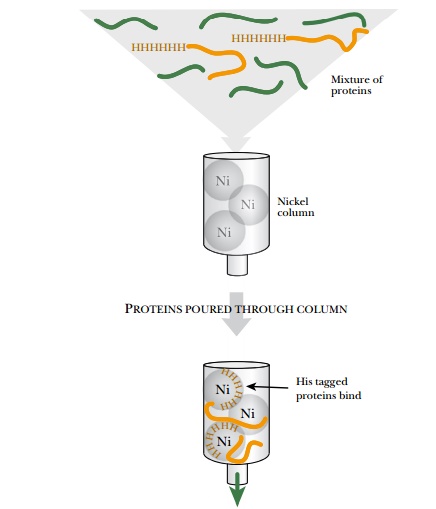 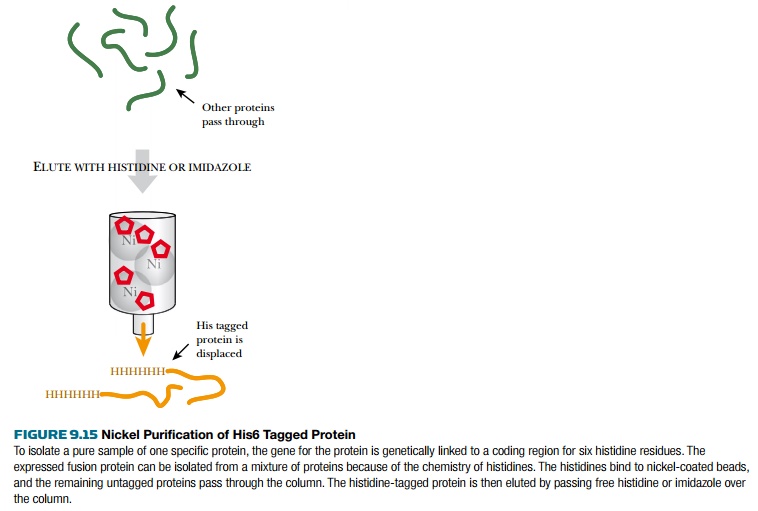 Another short tag is the “Strep” tag, provided by a short DNA segment that encodes a 10-amino-acid peptide with a similar structure to biotin. The biotin-like peptide binds tightly to avidin and streptavidin, so Strep-tagged proteins are isolated by binding to streptavidin-coated beads or a streptavidin column.

Besides short tags, longer tags that consist of entire proteins are used for some applications. Three popular tags include protein A from Staphylococcus, glutathione-S-transferase (GST) from Schistosoma japonicum, and maltose-binding protein (MBP) from Escherichia coli. Just like the short tags, the genes for these longer tags are genetically fused to the target gene. The hybrid gene constructs are expressed by using appropriate transcriptional promoters and terminators. Once the host cells express the hybrid gene, the fusion protein is isolated by purifying the protein tag. A specific antibody is available to bind to protein A, and lowering the pH releases the fusion protein. MBP binds to maltose (attached to beads or a column), and the fusion protein is released by adding free maltose. GST binds to its substrate, glutathione (on beads or a column), and free glutathione is used to release the hybrid protein. Once the fusion protein has been isolated, it must be cleaved to separate the target protein from the tag protein.

A useful feature of the longer tags is the presence of protease cleavage site between the target protein and the tagging protein. 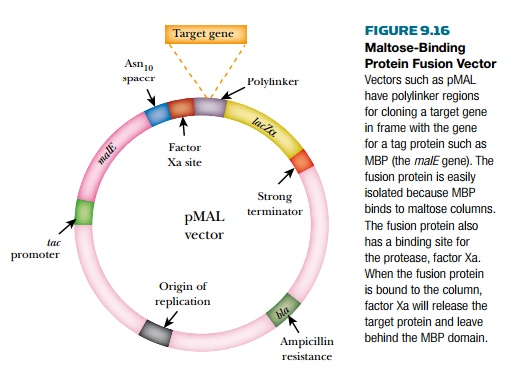 The vector for pMAL (New England Biolabs, Inc., Ipswich, MA) has the gene for MBP, followed by a spacer region, a recognition site for factor Xa, then the polylinker region for cloning the target gene (Fig. 9.16). Factor Xa is a specific protease used in the blood clotting system, and inserting its recognition sequence allows the MBP portion of the hybrid protein to be cleaved from the target protein. After the hybrid protein is eluted from the purification column with maltose, the original protein is isolated by protease treatment. This is extremely  useful when pure, native protein is needed for analysis.

An even easier way to obtain a pure sample of native protein is the self-cleavable intein tag. The approach is based on inteins, self-splicing intervening segments found in some proteins. Inteins are the protein equivalent to introns in RNA. The intein removes itself from its host protein via a branched intermediate (Fig. 9.17). 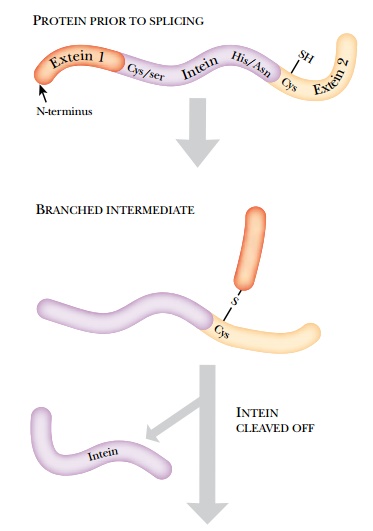 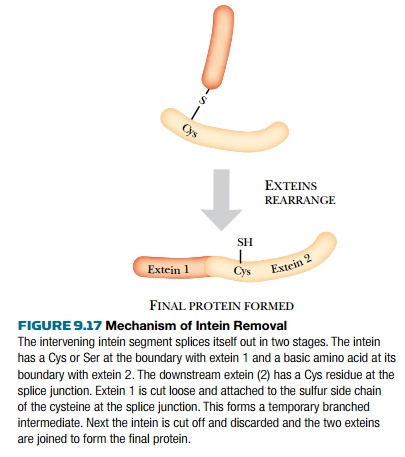 The Intein Mediated Purification with Affinity Chitin-binding Tag (IMPACT) system from New England Biolabs uses a modified intein from the VMA1 gene of Saccharomyces cerevisiae. Intein cleavage is used to release the target protein after purification of the fusion protein (Fig. 9.18). 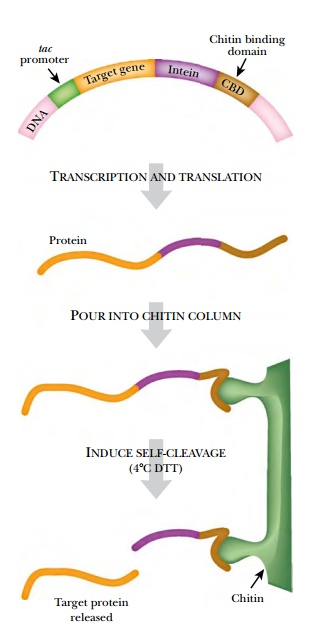 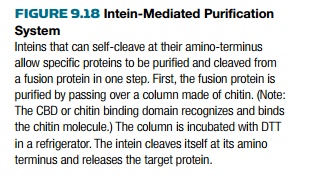 This yeast intein originally cleaved both its N-terminus and its C-terminus, but it has been modified so that it only cleaves its N-terminus. The chitin-binding tag of this system is the small chitin-binding domain (CBD) from the chitinase A1 gene of Bacillus circulans. (Chitin is  the substance that forms the exoskeleton of insects.) The vector has a polylinker or cloning site for the target gene followed by the DNA segment encoding the intein, followed by the CBD.  The fusion protein is expressed, and cell lysates containing the hybrid protein are isolated. When the lysate passes through a chitin column, the hybrid protein binds to the column via the CBD, and the remaining cellular proteins elute. The column is then incubated at 4°C with dithiothreitol (DTT), a thiol reagent that activates the intein to cleave its N-terminus. Thus the target protein is released from the column, leaving behind the intein and CBD regions.