In addition to protein function and expression, proteomics attempts to find relevant protein interactions. For those who like “-omics” terminology, the total of all protein-protein interactions is called the protein interactome. For example, hormones usually bind to receptors that pass the signal on. Often this involves a protein relay where one protein activates another, which in turn activates yet another. To understand hormone function, researchers must identify all the proteins in the signal cascade. Phage display is one way to identify interactions, but the displayed proteins may not fold correctly or specific cofactors may be missing when mammalian proteins are expressed in bacteria. 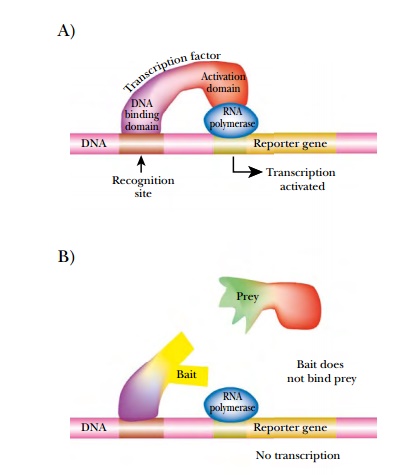 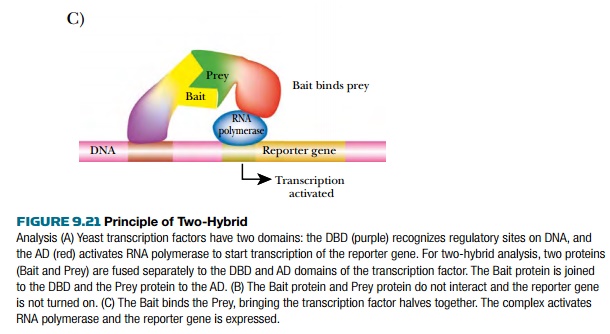 In the two-hybrid system, the two domains are each fused to different proteins by creating hybrid genes. The bait is the DBD genetically fused to the protein of interest, and the prey is the AD fused to proteins that are being screened for interaction with the bait. When the bait and prey bind, the DBD and AD activate transcription of the reporter gene. 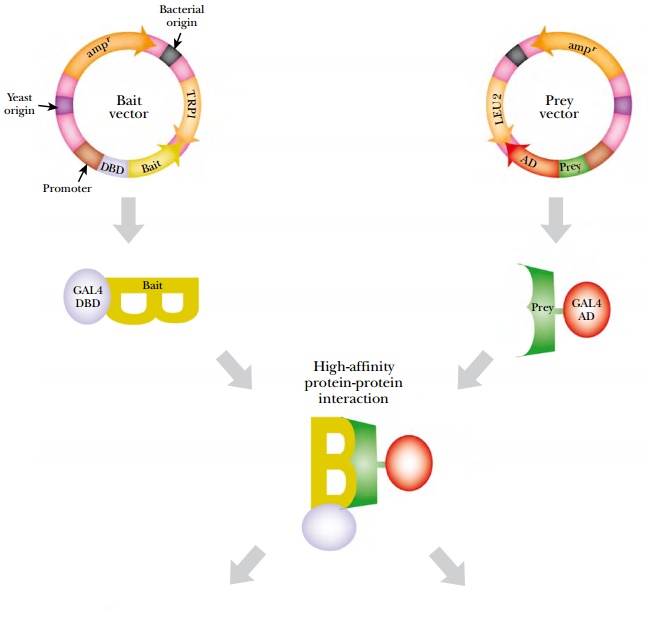 The reporter genes must be engineered to be under control of the GAL4 recognition sequence. Common reporter genes include HIS3, which encodes an enzyme in the histidine pathway and whose expression allows yeast cells to grow on media lacking histidine, or URA3, which allows growth without uracil. These reporter systems require yeast host cells that are defective in the corresponding genes. However, they do allow direct selection of positive isolates.

Another reporter used is lacZ from E. coli, which encodes β-galactosidase. Both bacteria and yeast that express lacZ turn blue when grown with X-Gal. β-galactosidase cleaves X-Gal, releasing a blue product. The reporter genes are usually integrated into the yeast genome, rather than being carried on a separate vector.

The yeast two-hybrid system has been used to identify all the protein interactions in the yeast proteome by mass screening with mating (Fig. 9.23). Yeast has about 6000 different proteins, and each of these has been cloned into both vectors via PCR. This way, each protein can be used as both bait and prey. All the bait vectors were transformed into haploid yeast of one 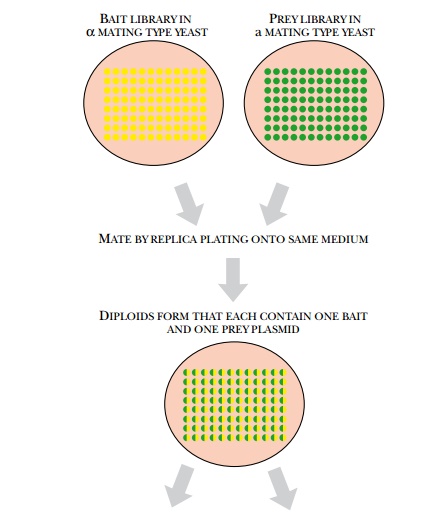 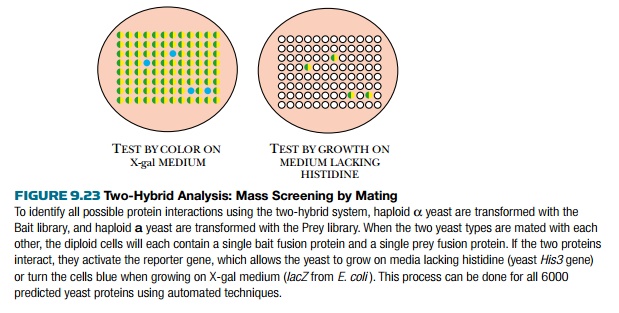 mating type, and the prey vectors into the other mating type. Haploid cells carrying bait are fused to haploid cells with prey and the resulting diploid cells are screened for reporter gene activity. This analysis thus examined 6000 × 6000 combinations for protein interaction.

The yeast two-hybrid system has some limitations. Because transcription factors must be in the nucleus to work, the target proteins must also function in the nucleus. For some proteins, entering the nucleus may cause the protein to misfold. For other proteins, the nucleus does not have the proper cofactors and the protein may be unstable. Large proteins may not be expressed well, or may be toxic to the yeast, leading to false negative results.