Digestion of Proteins by Proteases

Proteases (also known as proteinases or peptidases) hydrolyze the peptide bond between amino acid residues in a polypeptide chain.

DIGESTION OF PROTEINS BY PROTEASES

Proteases (also known as proteinases or peptidases) hydrolyze the peptide bond between amino acid residues in a polypeptide chain. Proteases may be specific and limited to one or more sites within a protein, or they may be nonspecific, digesting proteins into individual amino acids. The ability to digest a protein at specific points is critical to mass spectrometry (see later discussion) and many other protein experiments. For example, proteases are used to cleave fusion proteins or remove single amino acids for protein sequencing.

Proteases are found in all organisms and are involved in all areas of metabolism. During programmed cell death, proteases digest cellular components for recycling. Plants deploy proteases to protect themselves from fungal or bacterial invaders. In the biotechnology industry, proteases have many uses. For example, they are included as additives in detergents to digest proteins in ketchup, blood, or grass stains. 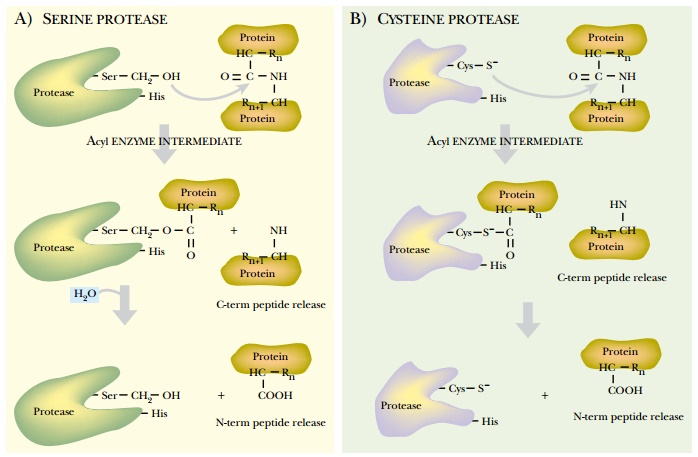 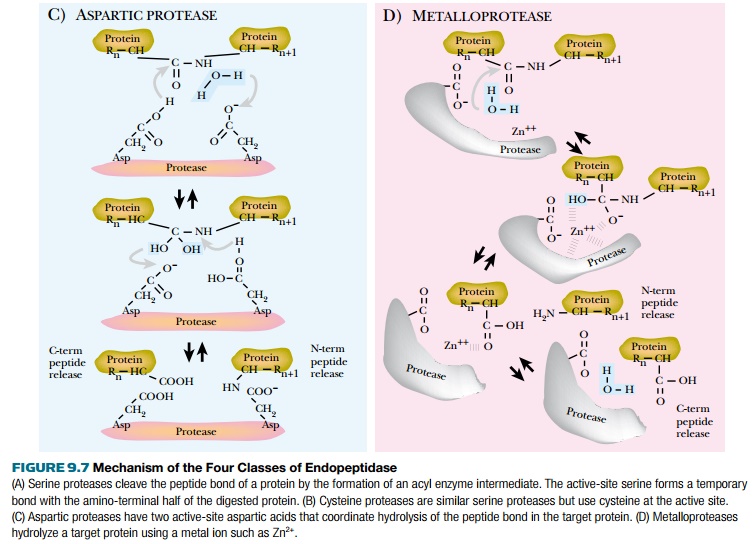 Proteases are classified by three criteria: the reaction catalyzed, the chemical nature of the catalytic site, and their evolutionary relationships. Endopeptidases cleave the target protein internally. Exopeptidases remove single amino acids from the amino- or carboxy-terminal ends of a protein. Exopeptidases are divided into carboxypeptidases or aminopeptidases depending on whether they digest proteins from the carboxy- or amino-terminus, respectively. Proteases are also divided based on their catalytic site architecture. Serine proteases have a serine in their active site that covalently attaches to one of the protein fragments as an enzymatic intermediate (Fig. 9.7). This class includes the chymotrypsin family (chymotrypsin, trypsin, and elastase), and the subtilisin family. Cysteine proteases have a similar mechanism, but use cysteine rather than serine. These include the plant proteases (papain, from papaya, and bromelain, from pineapple) as well as mammalian proteases such as calpains. Aspartic proteases have two essential aspartic acid residues that are close together in the active site, although far apart in the protease sequence. This family includes the digestive enzymes pepsin and chymosin. Metalloproteases use metal ion cofactors to facilitate protein digestion and include thermolysin. Finally, the fifth class of proteases, threonine proteases, has an active-site threonine.

Researchers who study proteases have not escaped the “-omics” culture, and sometimes the term degradome is used for the complete set of proteases expressed at one specific time by a cell, tissue, or organism. Understanding the degradome of an organism relies on much the same techniques as used for proteomics, although modifications are made to look only at proteases rather than at the entire proteome. For example, protease chips contain only antibodies to known proteases rather than to all proteins (see later discussion).