Chromatography is a general term for many separation techniques, where a sample of molecules, the analyte, is dissolved in a mobile phase and then forced through a stationary phase.

HPLC has many applications including separation, identification, purification, and quantification of proteins or other analytes. Preparative HPLC is used to isolate and purify one specific protein from a mixture. Using HPLC to identify a compound requires a specific detection method. For example, if the target protein carries a fluorescent label, then a fluorescence detector would be used. One application of HPLC, quantitative HPLC, can be used to determine the amount of target protein by comparing it to a set of standard proteins with known amounts. This allows measurement of changes in level of a specific protein under different conditions. A major benefit that HPLC offers to proteomics researchers is that the separated proteins are already in a liquid state, making further analysis easier. 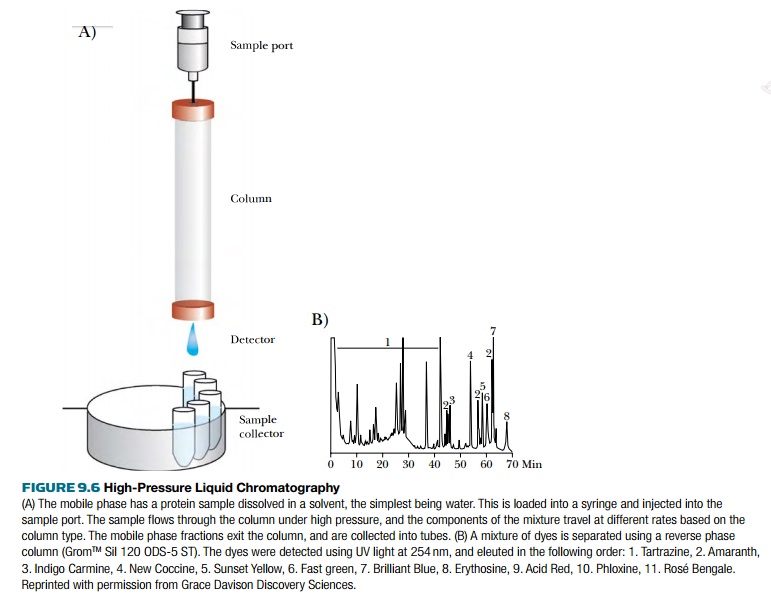 Although HPLC seems simple in theory, the actual process of separating the mixture into its components is complex. Each mixture has different chemistries, and so many different solid phases are used to separate them. Even before it is loaded into the column, the mixture can be manipulated to remove certain components or change their chemistry. For example, treating with a phosphatase will remove phosphate groups from proteins. Such manipulations can increase the efficiency with which the protein of interest is isolated from the mixture.

HPLC is very adaptable because of the availability of different types of stationary phase materials. Size exclusion chromatography columns contain porous beads that separate mixtures of proteins by size. Large molecules do not enter the pores of the beads and travel through the column quickly, while smaller compounds are delayed by entering the beads. Many different pore sizes are available for mixtures of different size ranges. Reverse phase HPLC uses columns packed with hydrophobic alkyl chains attached to silica-based material. The column binds and delays hydrophobic molecules while hydrophilic molecules elute faster.

Ion-exchange HPLC uses a stationary phase with charged functional groups that bind oppositely charged molecules in the sample. Such molecules remain in the column after the sample has passed through. To elute them, the mobile phase is changed. For example, if the pH of the mobile phase is adjusted, the net charge on many proteins will be altered and they will be released from the column. Other stationary phases form hydrogen bonds with the analyte and separate based on overall polarity. For affinity HPLC, the stationary phase contains a molecule that specifically binds the target protein, for example, an antibody. When a mixture passes over the stationary phase, only the target protein is bound, and other proteins pass through. Changing the mobile phase so as to disrupt the interaction releases the protein of interest.

As molecules exit the column, they must be detected. Many different detectors exist. These usually respond by plotting peaks as molecules pass by. Refractive index detectors monitor whether the exiting mobile phase refracts any light by shining a light beam through it. Compounds present in exiting fractions will scatter light, and a photodetector records this as a positive signal. The amount of scatter affects the height of the peak and the length of time of the scatter determines the width of the peak. Ultraviolet detectors have a UV light source and a detector to determine when the passing mobile phase absorbs the UV light. Such detectors may monitor one or more wavelengths depending on the substance being examined. Fluorescence detectors detect compounds that fluoresce, that is, absorb and re-emit light at different wavelengths; radiochemical detectors detect radioactively labeled compounds; and electrochemical detectors measure compounds that undergo oxidation or reduction reactions. An approach that is increasingly used for proteomics is detection by mass spectrometry. This combination allows proteins separated by HPLC to be fed directly into a mass spectrometer for identification.

A critical aspect of HPLC is getting a good separation between the different proteins in the sample, that is, good resolution. Each peak that comes off the column should be symmetrical and as narrow as possible. For high resolution, many experimental conditions can be adjusted. The most obvious is changing the stationary phase. Sometimes just changing the particle size of the stationary phase improves separation. An alternative is to adjust the composition of the mobile phase. Temperature also affects many separations and may need to be controlled.