The operation of connecting an alternator in parallel with another alternator or with common bus-bars is known as synchronizing.

For proper synchronization of alternators, the following four conditions must be satisfied

It means that the switch must be closed at (or very near) the instant the two voltages have correct phase relationship.

Condition (1) is indicated by a voltmeter, conditions (2), (3) and (4) are indicated by synchronizing lamps or a synchronoscope.

The synchronizing lamp method is consists of 3 lamps connected between the phases of the running 3-ph generator and the incoming generator as shown in Fig:

In three phase alternators, it is necessary to synchronize one phase only, the other two phases be will then synchronized automatically. However, first it is necessary that the incoming alternator is correctly 'phased out' i.e. the phases are connected in the proper order of R,Y &B not R, B, Y etc. 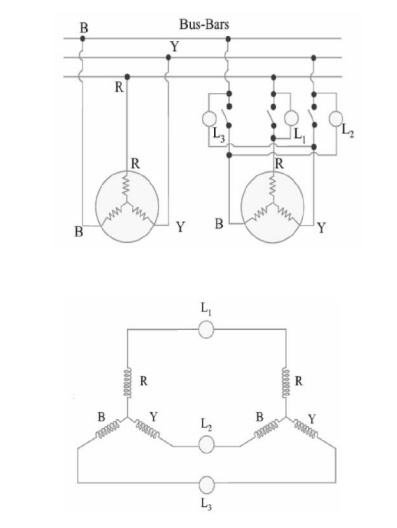 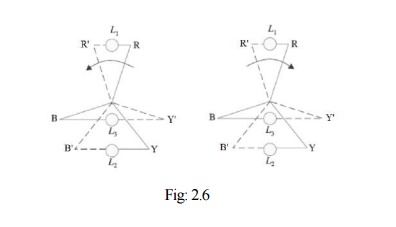 Two set of star vectors will rotate at unequal speeds if the frequencies of the two are different. If the incoming alternator is running faster, then voltage star R′ Y′ B′ appear to rotate anticlockwise with respect to the bus-bar voltage star RYB at a speed corresponding to the difference between their frequencies. With reference to Fig: 2.6, it is seen that voltage across L1 is RR′ to be increasing from zero, and that across L2 is YB′ which is decreasing, having just passed through its maximum, and that across L3 BY′ which is increasing and approaching its maximum. Hence the lamps will light up one after the other in the order 2, 3, 1,2,3,1 or 1, 2, 3. If the incoming alternator is running slower, then the sequence of light up will be 1, 3, 2. Synchronization is done at the moment the uncrossed lamp L1 is in the middle of the dark period and other two lamps are equally bright. Hence this method of synchronization is known as two bright one dark lamp method.

It should be noted that synchronization by lamps is not quite accurate, because to a large extent, it depends on the sense of correct judgment of the operator. Hence, to eliminate the element of personal judgment in routine operation of alternators, the machines are synchronized by a more accurate device called a synchronoscope as shown in Fig: It consists of 3 stationary coils and a rotating iron vane which is attached to a pointer. Out of three coils, a pair is connected to one phase of the line and the other to the corresponding machine terminals, potential transformer being usually used. The pointer moves to one side or the other from its vertical position depending on whether the incoming machine is too fast or too slow. For correct speed, the pointer points vertically up. 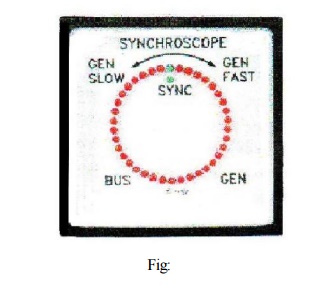