Effect of Change of Excitation

A change in the excitation of an alternator running in parallel with other affects only its KVA output; it does not affect the KW output.

Effect of Change of Excitation:

A change in the excitation of an alternator running in parallel with other affects only its KVA output; it does not affect the KW output. A change in the excitation, thus, affects only the power factor of its output. Let two similar alternators of the same rating be operating in parallel, receiving equal power inputs from their prime movers. Neglecting losses, their kW outputs are therefore equal. If their excitations are the same, they induce the same emf, and since they are in parallel their terminal voltages are also the same. When delivering a total load of I amperes at a power-factor of cos Ф, each alternator delivers half the total current and I1 = I2 = I/2. 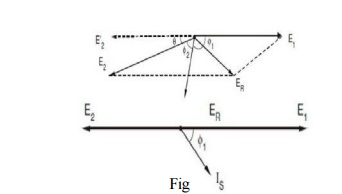 Since their induced emfs are the same, there is no resultant emf acting around the local circuit formed by their two armature windings, so that the synchronizing current, Is, is zero. Since the armature resistance is neglected, the vector difference between E1 = E2 and V is equal to, I1Xs1 I2Xs2 , this vector leading the current I by 900, where XS1 and XS2 are the synchronous reactances of the two alternators respectively.

Now consider the effect of reducing the excitation of the second alternator. E2 is therefore reduced as shown in Figure. This reduces the terminal voltage slightly, so let the excitation of the first alternator be increased so as to bring the terminal voltage back to its original value. Since the two alternator inputs are unchanged and losses are neglected, the two kW outputs are the same as before. The current I2 is changed due to the change in E2, but the active components of both I1 and I2 remain unaltered. It can be observed that there is a small change in the load angles of the two alternators, this angle being slightly increased in the case of the weakly excited alternator and slightly decreased in the case of the strongly excited alternator. It can also be observed that I1 + I2 = I, the total load current.