Where Kp is called pitch factor and Kd is called distribution factor.

Let the coil have a pitch short by angle  q electrical space degrees from full pitch and induced emf in each coil side be E,

• when the coil is short pitched by  q electrical space degrees the resultant induced emf, ER  in the coil is phasor sum of two voltages,q apart 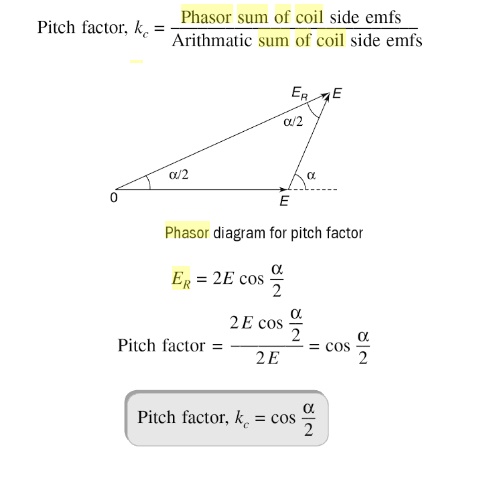 Kpn = cos a n where n is the order of harmonic

The distribution factor is always less than unity.

Induced emf in each coil side = Ec

Angular displacement between the slots,  γo

The emf induced in different coils of one phase under one pole are represented by side AC, CD, DE,

EF Which are equal in magnitude (say each equal Ec) and differ in phase (say by γo) from each other. 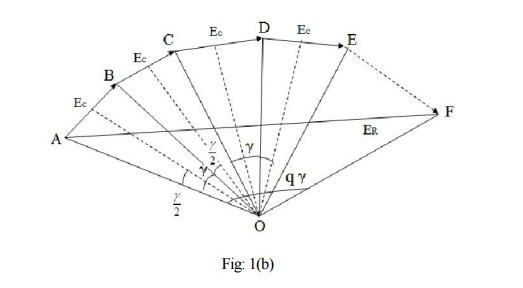 If bisectors are drawn on AC, CD, DE, EF they would meet at common point (O). The point O would be the center of the circle having AC, CD, DE, EF as the chords and representing the emfs induced in the coils in different slots.

•                     Because the resulting voltage waveform is symmetric about the center of the rotor flux, no even harmonics are present in the phase voltage.

Elimination or Suppression of Harmonics

Field flux waveform can be made as much sinusoidal as possible by the following methods:

3.             Distribution: distribution of the armature winding along the air-gap periphery

6.             Alternator connections: star or delta connections of alternators suppress triplen harmonics from appearing across the lines

Both distribution factor (Kd) and pitch factor Kp together is known as winding factor Kw.