When an alternator is subjected to a varying load, the voltage at the armature terminals varies to a certain extent, and the amount of this variation determines the regulation of the machine. When the alternator is loaded the terminal voltage decreases as the drops in the machine stars increasing and hence it will always be different than the induced emf.

Voltage regulation of an alternator is defined as the change in terminal voltage from no load to full load expressed as a percentage of rated voltage when the load at a given power factor is removed without change in speed and excitation. Or the numerical value of the regulation is defined as the percentage rise in voltage when full load at the specified power-factor is switched off with speed and field current remaining unchanged expressed as a percentage of rated voltage.

Hence regulation can be expressed as

This method is also known as synchronous impedance method. Here the magnetic circuit is assumed to be unsaturated. In this method the MMFs (fluxes) produced by rotor and stator are replaced by their equivalent emf, and hence called emf method.

To predetermine the regulation by this method the following informations are to be determined. Armature resistance /phase of the alternator, open circuit and short circuit characteristics of the alternator. 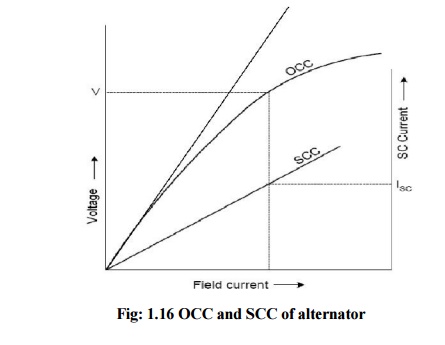 The ratio of open circuit voltage to the short circuit current at a particular field current, or at a field current responsible for circulating the rated current is called the synchronous impedance. 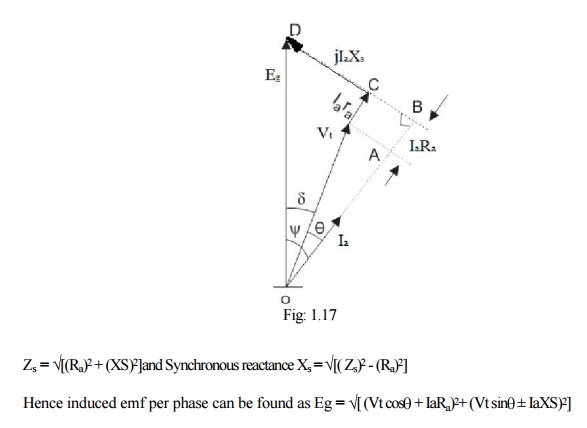 Synchronous impedance method is easy but it gives approximate results. This method gives the value of regulation which is greater (poor) than the actual value and hence this method is called pessimistic method. The complete phasor diagram for the emf method is shown in Fig 1.18. 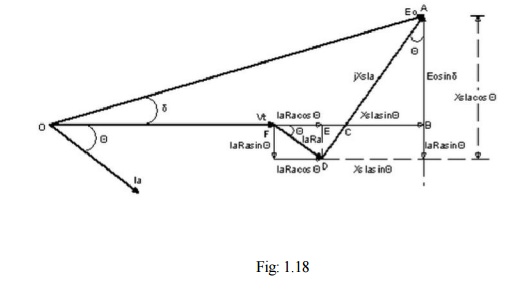 This method is also known as amp - turns method. In this method the all the emfs produced by rotor and stator are replaced by their equivalent MMFs (fluxes), and hence called mmf method. In this method also it is assumed that the magnetic circuit is unsaturated. In this method both the reactance drops are replaced by their equivalent mmfs. Fig: 1.19 shows the complete phasor diagram for the mmf method. Similar to emf method OC and SC characteristics are used for the determination of regulation by mmf method. The details are shown in Fig: 1.19. Using the details it is possible determine the regulation at different power factors. 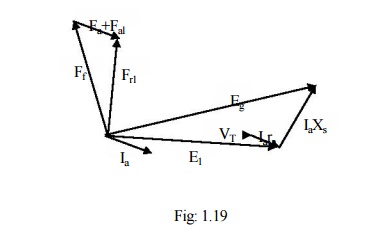 Following procedure can be used for determination of regulation by mmf method. 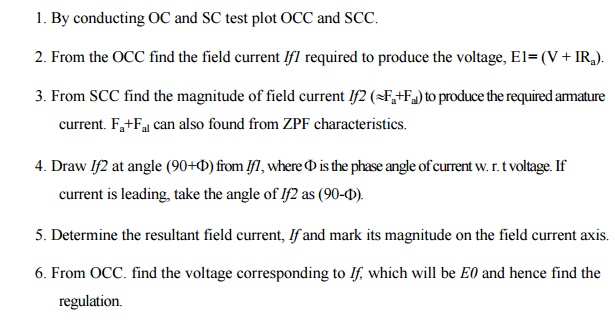 Because of the assumption of unsaturated magnetic circuit the regulation computed by this method will be less than the actual and hence this method of regulation is called optimistic method.

ASA or modified mmf method consider saturation effect for calculation of regulation. In the mmf method the total mmf F computed is based on the assumption of unsaturated magnetic circuit which is unrealistic. In order to account for the partial saturation of the magnetic circuit it must be increased by a certain amount FF2 which can be computed from occ, scc and air gap lines as explained below referring to Fig: 1.20 (i) and (ii). 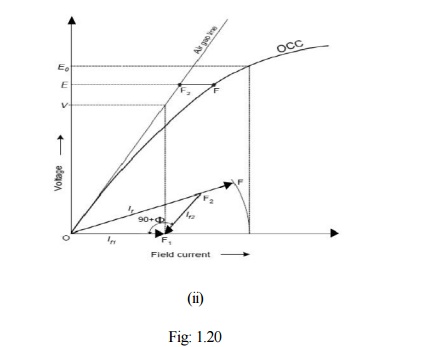 During the operation of the alternator, resistance voltage drop IaRa and armature leakage reactance drop IaXL are actually emf quantities and the armature reaction reactance is a mmf quantity. To determine the regulation of the alternator by this method OCC, SCC and ZPF test details and characteristics are required. AS explained earlier oc and sc tests are conducted and OCC and SCC are drawn. ZPF test is conducted by connecting the alternator to ZPF load and exciting the alternator in such way that the alternator supplies the rated current at rated voltage running at rated speed. To plot ZPF characteristics only two points are required. One point is corresponding to the zero voltage and rated current that can be obtained from scc and the other at rated voltage and rated current under zpf load. This zero power factor curve appears like OCC but shifted by a factor IaXL vertically and horizontally by armature reaction mmf as shown below in Fig: 1.21. Following are the steps to draw ZPF characteristics. 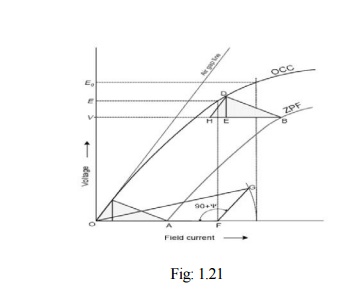 By suitable tests plot OCC and SCC. Draw air gap line. Conduct ZPF test at full load for rated voltage and fix the point B. Draw the line BH with length equal to field current required to produce full load current on short circuit. Draw HD parallel to the air gap line so as to cut the OCC. Draw DE perpendicular to HB or parallel to voltage axis. Now, DE represents voltage drop IXL and BE represents the field current required to overcome the effect of armature reaction.

The resultant field current is given by OG. Mark this length on field current axis. From OCC find the corresponding E0. Find the regulation.