Principle: The cellulose fibres of chromatography paper act as the supporting matrix for the stationary phase.

a. Paper development: There are two techniques which may be employed for the development of paper, ascending and descending methods. In both cases, the solvent is placed in the base of a sealed tank or glass jar to allow the chamber to become saturated with the solvent paper. The sample spots should be in a position just above the surface of the solvent so that as the solvent moves vertically up the paper by capillary action, separation of the sample is achieved.

b. Component detection: The separated components can be detected by (i) examining the paper under ultraviolet light; (ii) spraying of papers with specific colour reagents, for example ninhydrin for amino acids and sulphuric acid for simple sugars. 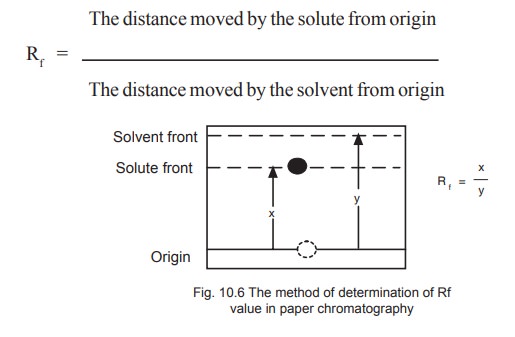 The value of Rf is constant for a particular compound under standard conditions and closely reflects the distribution co-efficient for that compound.