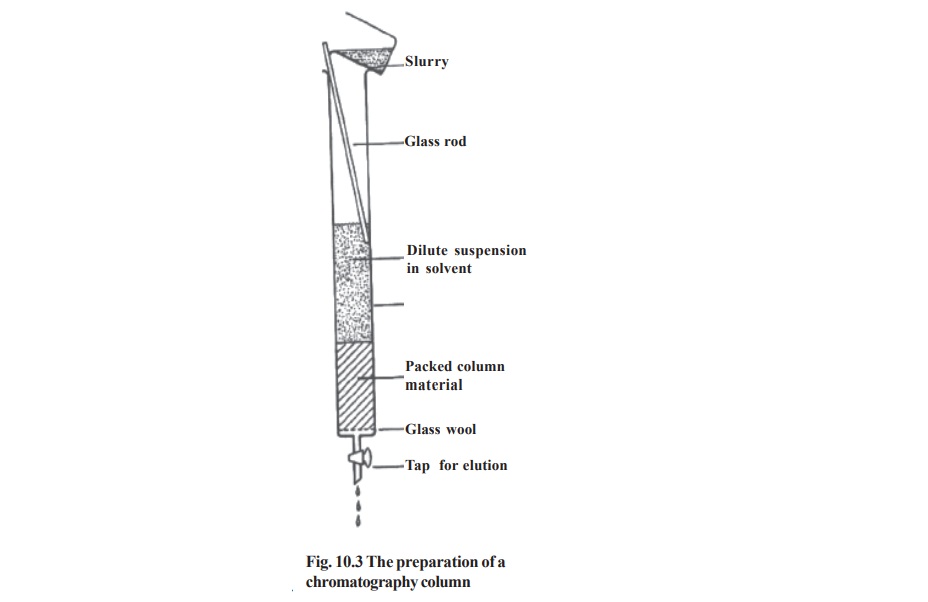 All the major types of chromatography are routinely carried out using column type.

Column chromatography: In this type, the stationary phase is packed into a glass or metal columns (wide tubes or cylinders). The mixture to be separated is layered on the top of the column in the form of a solution at particular concentration. After equilibration the components are eluted out of the column one by one using specific mobile phases (Fig.10.2).The solvent used to elute the separated components is known as eluant.

An adsorbent may be described as a solid which has the property of adsorbing molecules at its surface, particularly when it is porous and finely divided. Adsorption can be specific so that one solute may be adsorbed selectively from a mixture. Separation of components by the method depends upon differences both in their degree of adsorption by the adsorbent and solubility in the solvent used for separation. Adsorption chromatography can be carried out in both the column and thin layer modes.

Principle: This technique is based upon the partitioning of compounds between a liquid stationary phase and a gas mobile phase . It is a widely used method for the qualitative and quantitative analysis of a large number of compounds (eg. fatty acids) because it has high sensitivity, reproducibility and speed of resolution. A stationary phase of liquid material such as a silicone grease is supported on an inert granular solid . This material is packed into a narrow coiled glass or steel column 1 to 3 meter long and 2 to 4mm internal diameter. Through this column an inert carrier gas (the mobile phase) such as nitrogen, helium or argon is passed. The column is maintained in an oven at an elevated temperature which volatilizes the compounds to be separated.

The basis for the separation is the difference in the partition coefficients of the volatilized compounds between the liquid and gas phases as the compounds are carried through the column by the carrier gas. As the compounds flow, they leave the column and pass through a detector which is connected to a recorder and record a peak. The area of the peak corresponds to the concentration of the compound separated.

Principle: The principle of this form of chromatography is the attraction between oppositely charged particles . Many biological materials, such as amino acids and proteins, have ionisable groups and the fact that may carry a net positive or negative charge can be utilized in separating mixtures of such compounds. The net charge carried by such compounds depend on their pKa and on the pH of the solution.

·           selective adsorption of the molecules to be separated by the ion exchange resins. B release of the exchangeable group from the matrix.

·           Regeneration of the matrix by recharging with the original exchangeable groups. 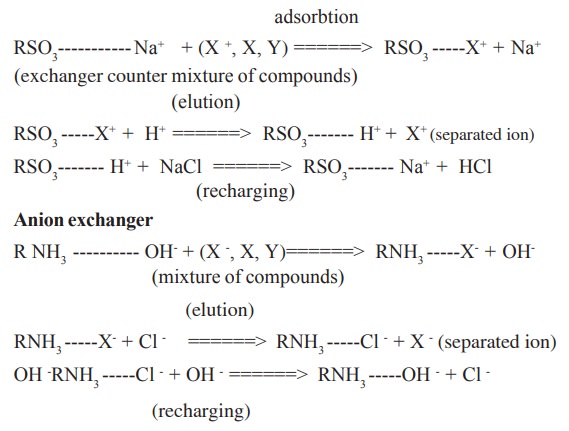 Some of the ion exchange materials used in this technique are Amberlite IRC 50, Bio- Rex, Dowex 50, Sephadex etc.

Princple: This technique is based on the separation of molecules on the basis of their molecular size and shape and the molecular sieve properties of a variety of porous materials which serve as the solid stationary phase.

A column of gel particles or porous glass granules is in equilibrium with a suitable solvent for the molecules to be separated. Large molecules which are completely excluded from the pores will pass through the interstitial spaces and smaller molecules will be distributed between the solvent inside and outside the molecular sieve and will then pass through the column at a lower rate . So the larger particles will come out of the column first followed by smaller particles (fig. 10.4). 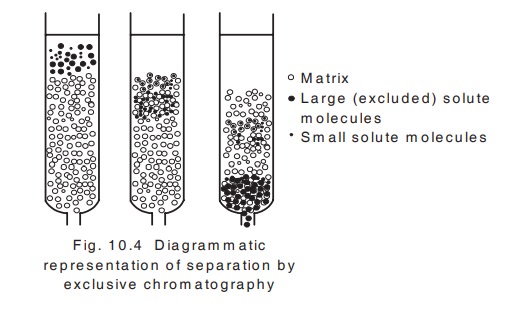 Under suitable experimental conditions when a complex mixture containing the specific compound to be purified is added to the insolubilised ligand generally contained in a chromatography column, only that compound will bind to the ligand. All the other compounds can be washed away and the compound subsequently recovered by displacement from the ligand. The purification of an enzyme by this technique is shown diagrammatically in Fig. 10.5. 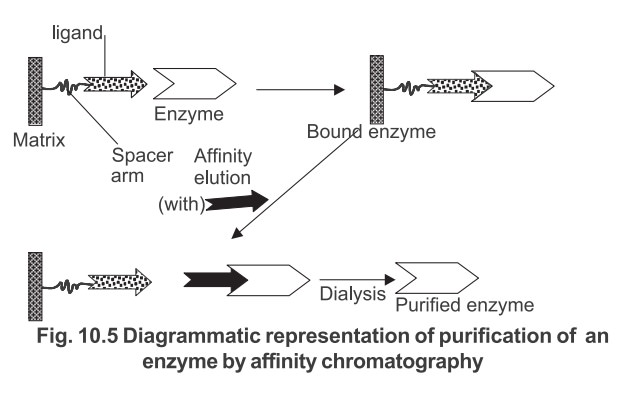 In practice, particles which are uniform, spherical and rigid are used as matrix materials such as polystyrene, cellulose, porous glass and silica etc.