PCR allows the scientist to clone genes or segments of genes for identification and analysis. PCR also allows the scientist to manipulate a gene that has already been identified. Various modifiedPCR techniques allow scientists to hybridize two separate genes or genes segments into one, delete or invert regions of DNA, and alter single nucleotides to change the gene and its encoded protein in a more subtle way. 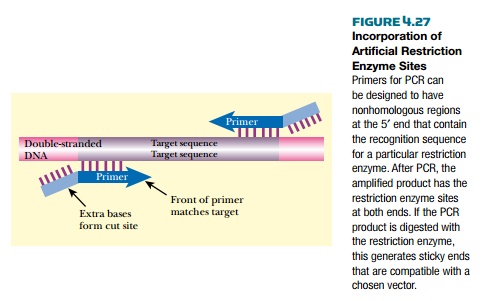 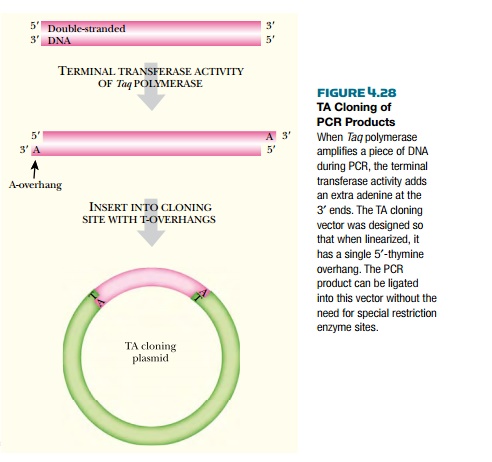 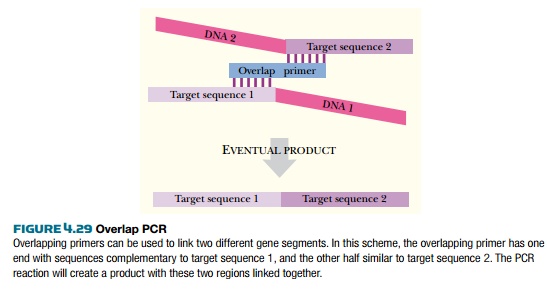 PCR can be used to create large deletions or insertions into a gene (Fig. 4.30). Once again the design of the PCR primers is key to the construction. For example, primers to generate insertions have two regions: the first half is homologous to the sequence around the insertion point; the second half has sequences complementary to the insert sequence. For example, suppose an antibiotic resistance gene such as npt (confers resistance to neomycin) is to be inserted into a cloning vector. The primers would have their 5′ ends complementary to the sequence flanking the insertion point on the vector and their 3′ ends complementary to the ends of the npt gene. First the primers are used to amplify the npt gene and give a product with sequences homologous to the vector flanking both ends. Next, the PCR product is transformed into bacteria harboring the vector. The npt gene recombines with the insertion point by homologous recombination, resulting in insertion of the npt gene into the vector. 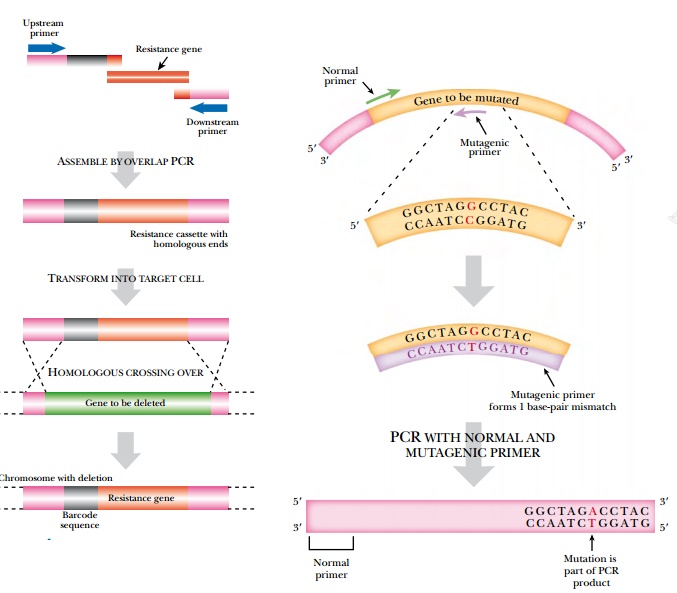 The insertion point(s) will determine whether the antibiotic cassette causes just an insertion or both an insertion plus a deletion. If the two PCR primers recognize separate homologous recombination sites, then the incoming PCR segment will recombine at these two sites.

Homologous recombination then results in the npt gene replacing a piece of the vector rather than merely inserting at one particular location.

PCR can also generate nucleotide changes in a gene by directed mutagenesis (Fig. 4.31). Usually only one or a few adjacent nucleotides are changed. First, a mutagenic PCR primer is synthesized that has nucleotide mismatches in the middle region of the primer. The primer will anneal to the target site with the mismatch in the center. The primer needs to have enough matching nucleotides on both sides of the mismatch so that binding is stable during the PCR reaction. The mutagenic primer is paired with a normal primer. The PCR reaction then amplifies the target DNA incorporating the changes at the end with the mutagenic primer. These changes may be relatively subtle, but if the right nucleotides are changed, then a critical amino acid may be changed. One amino acid change can alter the entire function of a protein. Such an approach is often used to assess the importance of particular amino acids within a protein.