Home | | Biotechnology Applying the Genetic Revolution | In Vitro Synthesis of DNA Can Determine the Sequence of Bases
Posted On :  01.06.2017 09:44 pm

In Vitro Synthesis of DNA Can Determine the Sequence of Bases

Being able to quickly and easily determine the sequence of any gene has been the driving force for the recent advances made in biotechnology. Before sequencing became commonplace, identifying the gene responsible for a particular trait or disease was challenging.

IN VITRO SYNTHESIS OF DNA CAN DETERMINE THE SEQUENCE OF BASES

Being able to quickly and easily determine the sequence of any gene has been the driving force for the recent advances made in biotechnology. Before sequencing became commonplace, identifying the gene responsible for a particular trait or disease was challenging. Frederick Sanger developed a method for sequencing a gene in vitro in 1974. He was interested in the amino acid sequence of insulin and decided to deduce the sequence of the protein from the nucleotide sequence. He invented the chain termination sequencing method, whose basic principles are still used today (Fig. 4.17). Much like DNA replication, chain termination sequencing requires a primer, DNA polymerase, a single-stranded DNA template, and deoxynucleotides. During in vitro sequencing reactions, these components are mixed and DNA polymerase makes many copies of the original template. The trick needed to deduce the sequence is to stop synthesis of some DNA chains at each base pair. Consequently, the fragments generated will differ in size by one base pair. These are then separated by gel electrophoresis. If the final base pair for each fragment is known, the sequence may be directly read from the gel (reading from bottom to top). 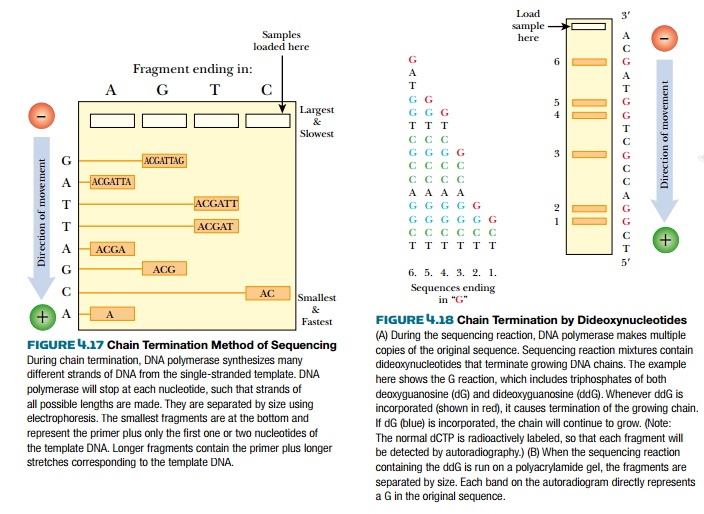 But how do we know what the final base is for each fragment on the sequencing ladder?

DNA polymerase synthesizes a new strand of DNA based on the template sequence. The chain consists of deoxynucleotides, each with a hydroxyl group at the 3′ position on the deoxyribose ring. DNA polymerase adds the next nucleotide by linking its 5′-phosphate to the 3′-hydroxyl of the previous nucleotide. If a nucleotide lacks the 3′-hydroxyl, no further nucleotides can be added and the chain is terminated (Fig. 4.18). During a sequencing reaction, a certain percentage of nucleotides with no 3′-hydroxyl, called dideoxynucleotides, are mixed with the normal deoxynucleotides. Historically, the dideoxynucleotides were labeled with 32P-phosphate, which is thus incorporated into each strand at the end. To get a stronger signal, one of the four normal deoxynucleotides is now radioactively labeled with 32P-phosphate. The radioactive label on the fragments is detected by autoradiography of the sequencing gel. To identify the end nucleotide, four separate reactions are run for each template, each reaction getting one of the four possible dideoxynucleotides. For example, reaction 1 contains all the normal deoxynucleotides plus a fraction of dideoxyguanine; therefore, all fragments synthesized in this mixture will end at a guanine in the sequence. Reaction 2 is similar, but contains dideoxycytosine as the terminating nucleotide and hence stops the chains at each of the cytosines. Each reaction has identical template DNA and identical primer so that each segment starts at the same location. Only the stopping points are different. Such reactions typically have a maximum length of about 300 nucleotides.

The fragments are relatively small for DNA and vary in length by only one nucleotide; therefore, they must be separated by size using polyacrylamide gel electrophoresis. The principle is the same as for agarose gel electrophoresis, but polyacrylamide has smaller pores, and so smaller fragments can be separated. Each reaction is run in a different lane, side by side to each other. The fragments are then visualized by autoradiography. When the sequencing gel is dried and exposed to photographic film, the dark bands represent each of the terminated fragments. The sequence is actually read from the bottom of the gel to the top, because the fragments terminated closest to the primer are smaller (hence run faster) than the ones further from the primer. The bands appear as a ladder, each separated by one nucleotide; therefore, each band is a different nucleotide on the sequence (Fig. 4.19).

E. coli, rolling circle replication and viral packaging create thousands of single-stranded copies of the template for sequencing. Alternatively, the sequence of interest is cloned into a typical plasmid vector, and the double-stranded template is denatured either with heat or chemicals to make it single-stranded.