Automated DNA sequencing uses a PCR-type reaction to sequence DNA. This is an improved way to sequence DNA because of its speed and because it can be analyzed by computer rather than a person. 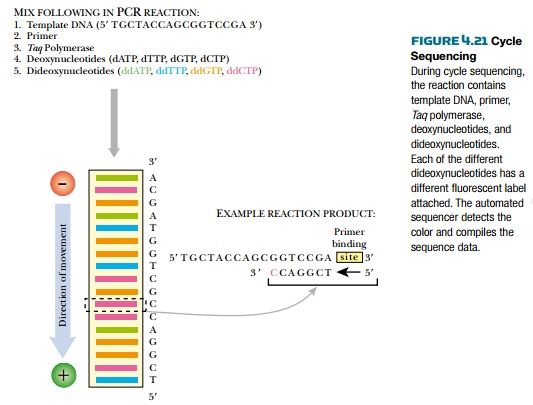 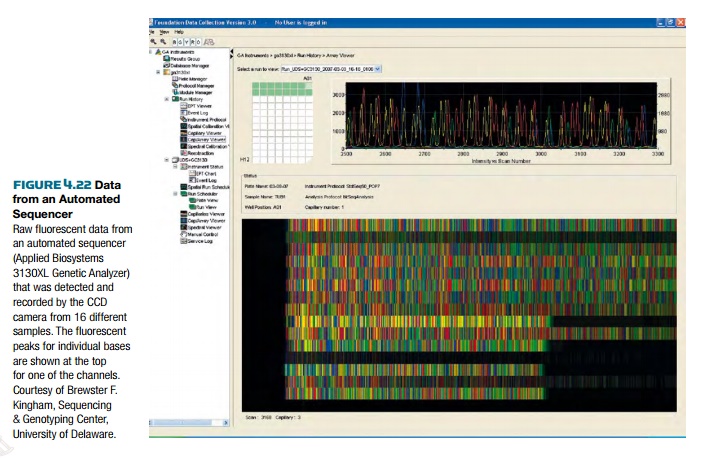 Another advance in sequencing has been the detection system. Traditionally, researchers have used radioactively labeled nucleotides, followed by autoradiography to detect the bands. A major improvement has been to use fluorescently labeled dideoxynucleotides; therefore, the terminal nucleotide of each DNA strand will fluoresce. Different fluorescent tags can be used for each of the four dideoxynucleotides, so that the whole reaction can be done in one tube. Automatic DNA sequencers detect each of the fluorescent tags and record the sequence of bases (Fig. 4.22). Much like regular sequencing, the different fragments are run on a gel, but instead of four lanes, the entire mix is all in the same lane. Some automatic DNA sequencers can read up to 96 samples side-by-side on each gel. At the bottom of each lane is a fluorescent activator, which emits light to excite the fluorescent dyes. On the other side is the detector, which reads the wavelength of light that the fluorescent dye emits. As each fragment passes the detector, it measures the wavelength and records the data as a peak on a graph. For each fluorescent dye, a peak is recorded and assigned to the appropriate base. An attached computer records and compiles the data into the DNA sequence.

Automated sequencing has a large startup cost because the sequence analyzer is quite expensive, but they run multiple samples at one time, and thus the cost per sample is quite low. Many universities and companies have a centralized facility that does the sequencing for all the researchers. In fact, sequencing has become so automated that many researchers just send their template DNA and primers to a company that specializes in sequencing.