Making DNA chemically rather than biologically was one of the first new technologies to be applied by the biotechnology industry.

Making DNA chemically rather than biologically was one of the first new technologies to be applied by the biotechnology industry. The ability to make short synthetic stretches of DNA is crucial to using DNA replication in laboratory techniques. DNA polymerase cannot synthesize DNA without a free 3′-OH end to elongate. Therefore, to use DNA polymerase in vitro, the researcher must supply a short primer. Such primers are used to sequence DNA (see later discussion), to amplify DNA with PCR (see later discussion), and even to find genes in library screening. So a short review of how primers are synthesized is included here. 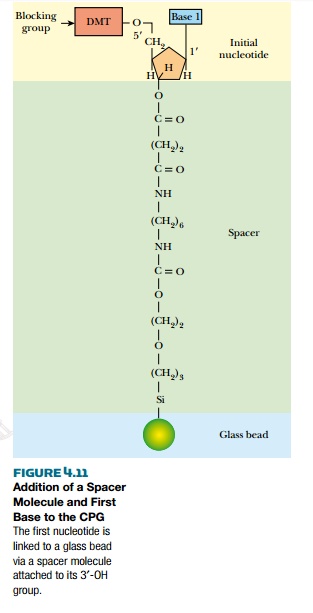 In 1970, Khorana’s lab synthesized an active tRNA molecule of 72 nucleotides (Agarwal et al., 1970). The chemistry he used was inefficient and cumbersome, but some of his ideas are still used in current oligonucleotide synthesis. Today chemical synthesis is done with an automated DNA synthesizer that creates DNA by sequentially adding one nucleotide after another in the sequence specified.

Unlike in vivo DNA synthesis, artificial synthesis is done in the 3′ to 5′ direction. The first step is attaching the first nucleotide to a porous glass bead made of controlled pore glass (CPG). The first nucleotide is not attached directly, but linked to the bead via a spacer molecule that bonds to the 3′-OH of the nucleotide (Fig. 4.11). Many beads are held in a column so that reagents can be washed through and removed easily. (Using CPG is one improvement over 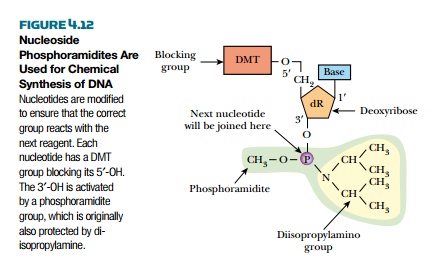 Each nucleotide is added as its phosphoramidite, which consists of a blocking group protecting a 3′-phosphite group (Fig. 4.12). (One problem with early oligonucleotide synthesis technology was branching. Rather than the incoming nucleotide adding to the 5′ end, it sometimes attached to the phosphate linking two nucleotides.) Nowadays every added nucleotide has a di-isopropylamine group attached to a methylated 3′ phosphite group. This structure protects against unwanted branching. It is also stable and can be stored for long periods. Before adding another nucleoside, the 3′ phosphite group is activated by tetrazole. The next nucleotide is then added, and reacts with the phosphite to form a dinucleotide (Fig. 4.13). 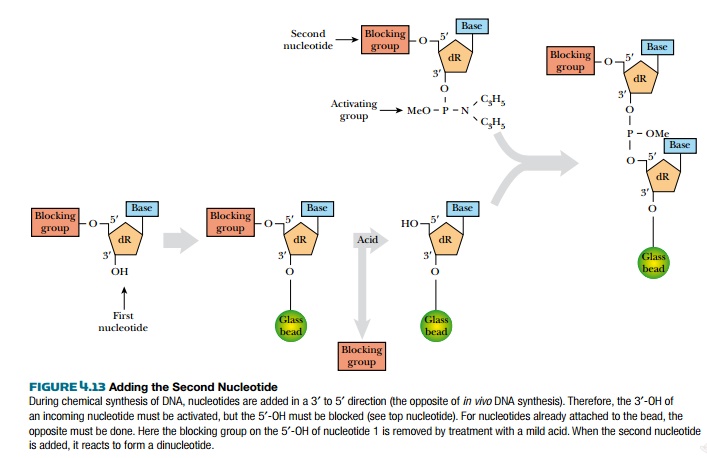 If the terminal nucleotide of a growing chain fails to react with an incoming nucleotide, the chain must be capped off to prevent generation of an incorrect sequence by later reactions. The 5′-OH of all unreacted nucleotides is acetylated with acetic anhydride and dimethylaminopyridine. This terminates the chain, so that no other nucleoside phosphoramidites can be added.

Khorana’s technology. He used polymer beads to couple the reaction, but found that the polymer swelled as the reagents passed through the column, which inhibited synthesis. CPG is superior because it does not swell.)

When linking the spacer to the nucleotide 3′-OH, a chemical blocking group is attached to the 5′-OH. Thus the 3′-OH is the only available reactive group. Khorana’s early synthesis was revolutionary in this respect because he chose the dimethyloxytrityl (DMT) group, which is still used as a blocking group in today’s synthesizers. DMT has a strong orange color and is easily removed from the 5′-OH so that another nucleotide can be linked to the first. In practice, the CPG–spacer–first nucleotide is washed, and then the DMT group is removed by mild acid such as trichloroacetic acid (TCA). The 5′-OH is now ready to accept the next nucleotide. The efficiency of removing DMT is critical. If DMT is not removed completely, many of the potential oligonucleotides will fail to elongate. The orange color reveals the efficiency of removal and is easily measured optically. 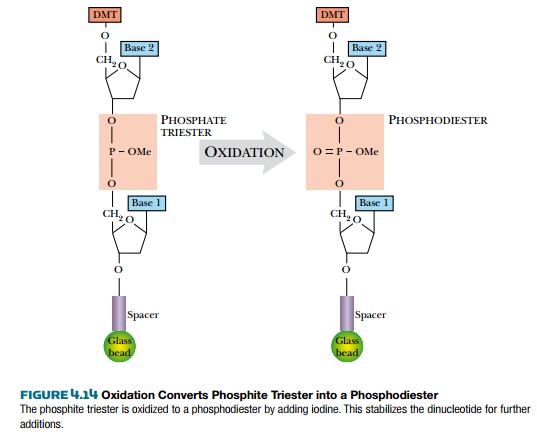 Phosphites are used because they react much faster, but they are unstable.

Adding iodine oxidizes the phosphite triester into the normal phosphodiester, which is more stable under acidic conditions (Fig. 4.14).

The column can now be prepared to add the third nucleotide. The DMT is removed with TCA, and the third phosphoramidite is added. The chains are capped so that any dinucleotides that didn’t react with the third phosphoramidite are prevented from adding any more nucleosides. Finally, the phosphate triester is oxidized to phosphodiester. This process continually repeats until all the desired nucleotides are added and the final oligonucleotide has the correct sequence (Fig. 4.15). 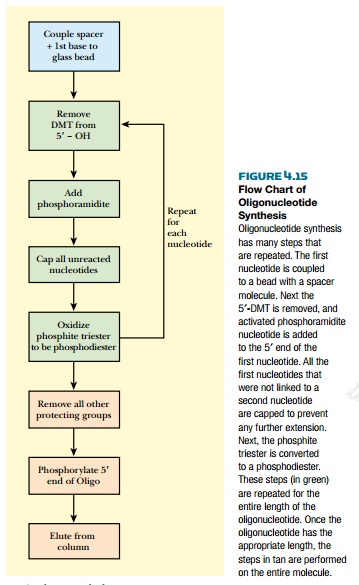