Oxytocin is a peptide hormone secreted by the posterior pituitary that participates in labor and delivery and elicits milk ejection in lactating women.

The two posterior pituitary hormones—vasopressin and oxytocin—are synthesized in neuronal cell bodies in the hypo-thalamus and transported via their axons to the posterior pituitary, where they are stored and then released into the circulation. Each has limited but important clinical uses.

Oxytocin is a peptide hormone secreted by the posterior pituitary that participates in labor and delivery and elicits milk ejection in lactating women. During the second half of pregnancy, uterine smooth muscle shows an increase in the expression of oxytocin receptors and becomes increasingly sensitive to the stimulant action of endogenous oxytocin. Pharmacologic concentrations of oxytocin powerfully stimulate uterine contraction.

Oxytocin is a 9-amino-acid peptide with an intrapeptide disulfide cross-link (Figure 37–5). Its amino acid sequence differs from that of vasopressin at positions 3 and 8. 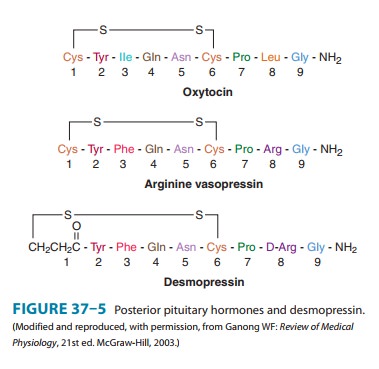 B. Absorption, Metabolism, and Excretion

Oxytocin is administered intravenously for initiation and aug-mentation of labor. It also can be administered intramuscularly for control of postpartum bleeding. Oxytocin is not bound to plasma proteins and is eliminated by the kidneys and liver, with a circulat-ing half-life of 5 minutes.

Oxytocin is used to induce labor for conditions requiring early vaginal delivery such as Rh problems, maternal diabetes, pre-eclampsia, or ruptured membranes. It is also used to augment abnormal labor that is protracted or displays an arrest disorder. Oxytocin has several uses in the immediate postpartum period, including the control of uterine hemorrhage after vaginal or cesarean delivery. It is sometimes used during second-trimester abortions.

Before delivery, oxytocin is usually administered intrave-nously via an infusion pump with appropriate fetal and maternal monitoring. For induction of labor, an initial infusion rate of 0.5–2 mU/min is increased every 30–60 minutes until a physi-ologic contraction pattern is established. The maximum infusion rate is 20 mU/min. For postpartum uterine bleeding, 10–40 units are added to 1 L of 5% dextrose, and the infusion rate is titrated to control uterine atony. Alternatively, 10 units of oxytocin can be administered by intramuscular injection after delivery of the placenta.

When oxytocin is used judiciously, serious toxicity is rare. The toxicity that does occur is due either to excessive stimulation of uterine contractions or to inadvertent activation of vasopressin receptors. Excessive stimulation of uterine contractions before delivery can cause fetal distress, placental abruption, or uterine rupture. These complications can be detected early by means of standard fetal monitoring equipment. High concentrations of oxytocin with activation of vasopressin receptors can cause excessive fluid retention, or water intoxication, leading to hyponatremia, heart failure, seizures, and death. Bolus injections of oxytocin can cause hypotension. To avoid hypotension, oxy-tocin is administered intravenously as dilute solutions at a con-trolled rate.